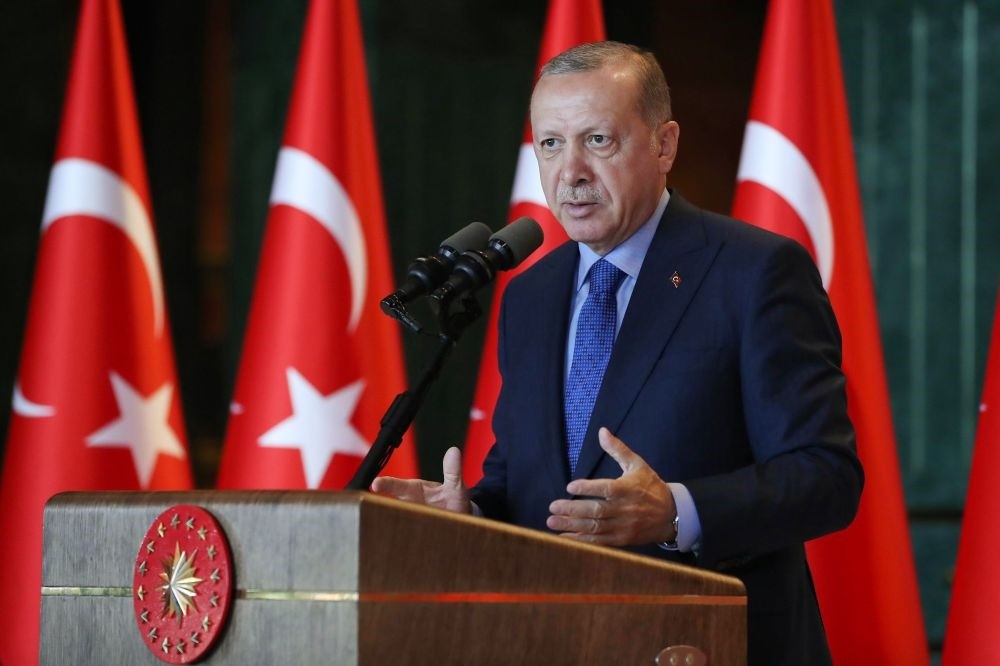 President Recep Tayyip Erdou011fan addressing a luncheon for participants of the 10th Ambassadors' Conference in Ankara yesterday.
by Özgenur Sevinç Aug 14, 2018 12:00 am

Turkish foreign policy in the new presidential system of government will be based on an innovative approach that places humanitarianism at its center, top foreign policy decision makers in Ankara said yesterday. The messages regarding the new approach were delivered by President Recep Tayyip Erdoğan and Foreign Minister Mevlüt Çavuşoğlu during the 10th annual Ambassadors' Conference, which has a theme this year of "Enterprising and Humanitarian Foreign Policy in the Presidential System of Government." President Recep Tayyip Erdoğan highlighted that after the June 24 elections it was a smooth transition from a parliamentary system to the presidential executive system, which he said was the most suitable for a proactive and dynamic foreign policy.

"The presidential system is the most suitable model of governance for our history, culture, the demands of people and the needs of our country," Erdoğan said, and added the democratic transition to the new system was desired by many previous influential leaders in Turkish politics.

Some 249 ambassadors and two charges de affaires were invited to the conference that will continue throughout the week.

Erdoğan added that he has participated in 113 official visits abroad and hosted 60 heads of states in Turkey in the past four years of his presidency, since August 2014. He added that the aim was to expand the limited relations in regions such as Africa and Latin America.

In the conference, the ambassadors will be informed about the functioning of the presidential governing system and the new steps taken in the structure of the state.

The developments regarding foreign policy, recent challenges and opportunities and the priorities for the upcoming term will be evaluated in the conference and the ambassadors will receive instructions from Erdoğan.

The conference is considered to be significant in effectively implementing the entrepreneurship and humanitarian foreign policy which aims to reach peace, welfare and stability in the region and beyond by the Turkish ambassadors.

Foreign Minister Mevlüt Çavuşoğlu said during his opening speech that Turkey's priorities in foreign policy for the upcoming period was to pursuing an enterprising foreign policy that is not hesitant of taking initiatives and at the same time taking peace and development nexus into account.

He added that at the same time Turkey's foreign policy is humanitarian and virtuous.

The foreign minister underscored that, "The peculiarity of Turkey is that she can focus on multiple directions at the same time. Turkish foreign policy has a 360 degree view – it is multidirectional and multidimensional."

The foreign minister explained the priorities of Turkey's foreign policy, saying that Turkey "will strengthen international cooperation against terrorist organizations, primarily the PKK and the PYD/YPG [Democratic Union Party/People's Protection Units], the Gülenist Terror Group (FETÖ) and Daesh. We will actively protect the rights of our citizens and kinsmen abroad.

We will strengthen our strategic ties and outreach policies based on mutual interests. At the same time we will be the voice of the innocent all around the world."

The number of Turkey's missions abroad reached 240, from 163 in 2002. The legal process to open 25 new missions has been completed. The process for four new missions is going on as well. Turkey holds is in fifth place in terms of the largest diplomatic network in the world.

Commenting on the enlargement process of Turkey's missions abroad, Çavuşoğlu stated that in the upcoming period, the aim is to increase the number of the missions abroad to 269.

The foreign minister underlined that Turkey will continue to enhance ties with various countries in its region and beyond.

In recent years, in addition to its humanitarian steps through state and non-state agencies in its region and the developing world, Turkey has taken steps to develop its diplomatic regions in Africa and Latin America. Erdoğan has already paid visits to several African countries this year.

Çavuşoğlu also said regarding Turkey's long standing relations with the EU and Ankara's EU accession road map that they have not given up on its goal for full membership to the EU.

"As Turkey, we will continue to take steps on reforms and compliance," the minister said and added that the EU must overcome the idleness on "visa liberalization" and "reviewing the Customs Union."

Turkey has long been waiting for accession to the EU. Despite the steps taken in the early 2000s, in recent years Ankara's ties with the EU have been strained due to what many Turkish officials describe as "EU's biases against Turkey and the [Justice and Development Party] AK Party governments."

"In the upcoming period, our

relations with the neighboring Russian Federation will remain as one of the fundamental elements of our foreign policy… Our relationship has critical value also for the prosperity and stability in our vast geography. With the principle of transparency, we put forward our views and stance on the issues that we are in disagreement with Russia," Çavuşoğlu also said.

In relation to ties with China, the minister stressed that Turkey will continue to enhance its cooperation with China, particularly through Beijing's One Belt, One Road initiative.

This agreement is expected to unlock international road transport channels between China and Europe, with Turkey constituting the middle corridor of the route. The agreement, which signifies China's willingness to render the initiative as integrated into Turkey's development strategy, will also help strengthen the exchange between China and Turkey, promoting the facilitation of international transportation among the countries located on the Silk Road.