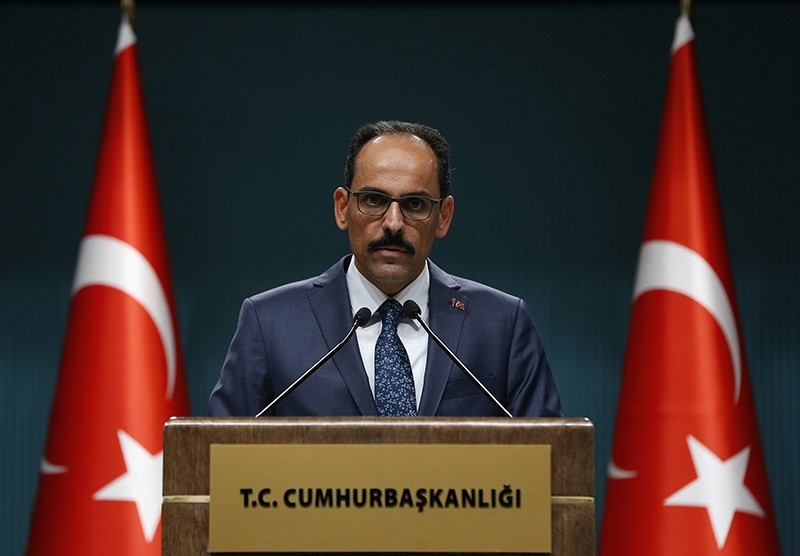 The spokesman for President Tayyip Erdoğan on Wednesday slammed the United States' disregard for Turkey's legal process, adding that Washington had made arbitrary comments and demands in the case of a detained pastor.

In a statement to Reuters, Ibrahim Kalın called on the U.S. to respect Turkey's judicial independence, one of Ankara's most pointed responses yet to criticism over its detention of a terror-linked evangelical pastor Andrew Brunson.

"There is rule of law in Turkey and the Andrew Brunson case is a legal issue. There is an ongoing legal process related to this individual," Kalın said in a statement to Reuters.

"It goes without saying that we find unacceptable the disregard of the legal process by the United States, which has been making certain demands."

Kalın said Bolton's remarks regarding Turkey's economic situation and Qatar's support were proof that the U.S. administration is targeting its NATO ally as part of an economic war.

He said the U.S. has established that it intends to use trade, tariffs and sanctions to start a global trade war. Turkey has no intention of starting an economic war but cannot stay silent, he added.

The U.S. administration's most recent policies are at odds with the fundamental principles and values of the NATO alliance, he said, adding that Turkey will work with the rest of the world against restrictive, punitive measures.

Turkey and the U.S. have been locked in a heated crisis emanating from unjust sanctions and the actions of Trump, as Washington levied sanctions on Interior Minister Süleyman Soylu and Justice Minister Abdulhamit Gül for not releasing Brunson.

Turkey responded in kind with similar sanctions to their U.S. counterparts, in addition to hiking tariffs for U.S. made alcohol, tobacco and automotive products. It also brought Trump's additional tariffs before the World Trade Organization.

Serving at the Diriliş (Resurrection) Protestant Church in the western province of İzmir, Brunson was arrested in October 2016 and moved to house arrest on July 25 due to health problems. He is scheduled to appear before a court in October for his third hearing after the court rejected several appeals for his release.

The case of Brunson, a Christian pastor from North Carolina who has lived in Turkey for more than two decades, added more troubles to an ongoing and deepening rift between the two NATO allies over a number of issues including U.S. support for PKK terrorist group's Syrian offshoot People's Protection Units (YPG) and the extradition of FETÖ leader Fetullah Gülen, who resides in Pennsylvania in a self-imposed exile for the last two decades.