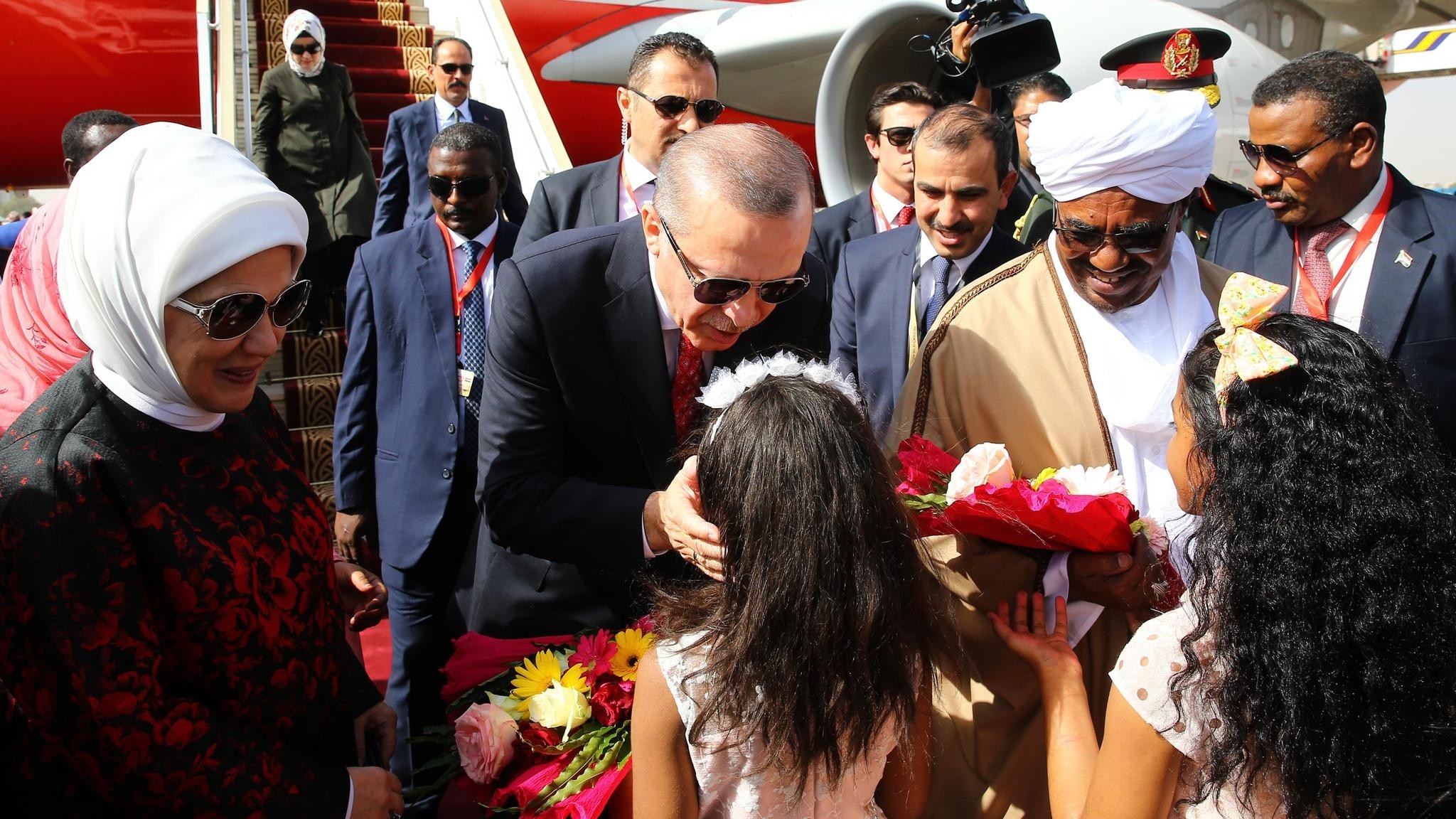 It is no longer surprising when analysts say that the 21st century will be preponderantly African. This is particularly visible when the investments of big players – such as China, the United States, the United Kingdom and France – in Africa are closely examined. Although not in the same scale as the aforementioned players, Turkey has also steadily and effectively increased its profile and influence in Africa, both in the economic and political realms, in the past decade. Experts say that for Turkey, expanding its influence in Africa is not merely a matter of economic policy, but rather it is a political and strategic move that is mutually beneficial for Africa's development and Turkey's long-term interests, serving Ankara's stated desire to play a more powerful role in the international arena.

Turkey's presence in Africa is particularly in line with President Recep Tayyip Erdoğan's frequently voiced motto "The world is bigger than five." Because, in order to fight against some of the injustices that occur globally, Turkey needs the full support of African states. "Considering that more than one-fourth of the world's states are in Africa, they have the capacity to affect decisions made at the United Nations General Assembly, one of the platforms where there is equality in representation," Muhammed Tandoğan, an academic at Istanbul Medeniyet University said.

The foundation stones of Turkey's Africa policy in the new Republic, however, were laid in 1998, during the time of then-Foreign Minister İsmail Cem, although historical ties date back to the Ottoman Empire. Yet, the actual jump can be said to have been made in 2005, which was also declared as a "Year of Africa" by Ankara, and Turkey was accorded observer status by the Africa Union the same year, under the then-prime minister, President Recep Tayyip Erdoğan's leadership.

In March this year, Erdoğan paid official visits to Algeria, Mauritania, Senegal and Mali. "We want to walk with Africa while a new world order is being established," Erdoğan said on his Twitter account at the end of his five-day tour of four African countries. This message, many say, outlines Erdoğan's approach to Africa under the new presidential system in the country.

In the recent decade, Turkey has shifted its foreign policy from a mere Western-oriented and static approach to one that seeks to balance between the West and the East, utilizing a more pragmatic approach. In other words, many pundits say that Turkey's Africa policy is a result of Ankara no longer "putting all their eggs in one basket," and rather focuses on diversifying its relationships, both politically and economically, in a way that would further expand its scope of international influence.

"Strategically, as a country that is a growing economy and investing in industry, the raw materials from Africa are crucially important for Turkey," Şeker added.

Erdoğan has visited nearly 30 African countries, some more than once, during his leadership in the country in the past 16 years. In some countries, while Erdoğan was the first Turkish president visiting, in others such as Somalia, Erdoğan's visit was the first by a leader from outside Africa in many years.

In addition, Turkey has also signed a number of bilateral agreements with the states in the continent, particularly through Turkish Cooperation and Coordination Agency (TİKA), the Maarif Educational Foundation and Yunus Emre Institutes, and thousands of African students have been given scholarships to study in Turkey, and Turkish Airlines have been increasing its number of destinations in Africa significantly.

Africa not a market, but a strategic partner

There is a "clear difference in Turkey's position on Africa vis-a-vis the U.S., the EU, or Russia's positions on the continent given Turkey's historical relations centered on the reciprocal "good-will" approach," Tandoğan said and added that Turkey's presence with Africa in political terms, also in economic relations, can be described as one that "make them win first-so you win."

"We do not see Africa as a market or a source of cheap labor. Rather, we see Africa as a strategic partner. We have signed agreements to establish High-Level Strategic Cooperation Councils," Turkish Ambassador to Sudan İrfan Neziroğlu said.

"And Africa sees Turkey as a hope. This is why Turkey's achievements from economy to sports is celebrated passionately by them. Turkey needs Africa and Africa needs Turkey," Neziroğlu added.

Relations between Turkey and Africa have gained particular strength since the declaration of Turkey as a strategic partner of the Continent by the African Union in 2008. In the past decade, 32 new foreign missions belonging to African states have also been opened in Turkey. According to Turkish Foreign Ministry, Guinea-Bissau, Cameroon, Tanzania and Mozambique are also planning to open Embassies in Ankara.

"What makes us different, compared to China and many other countries with interests in the region, is that their focus is centered on Africa's natural sources, but, we say 'Africa first,'" Ambassador Neziroğlu argued.

"In our trade relations, instead of a win-win approach, we have employed an understanding that says let Africa win first and recover, and then we can win too. This is why many of our companies work with much less profit when compared to other countries," Neziroğlu added.

Turkish Ambassador to Somali, Olgan Bekar, described Turkey-Africa relations as one that is "based on a reciprocal cooperation and support."

"African politicians frequently highlighted our transparent Africa policy and that we have no hidden agenda," Bekar added.

Turkey's humanitarian efforts in Africa, through both state and non-state institutions, have been lauded internationally, particularly in Somali and Sudan. The two conflict-ridden states have also suffered from poverty, famine and diseases as well. Yet, when no one dared to extend a helping hand to these two states, Turkey has been the one country winning hearts in the two countries, as it has offered its help.

"Turkey has always been pronounced as a positive actor in regional or international meetings on Somalia," Bekar said, and continued: "Somali is the success story of our humanitarian foreign policy, which we have continued under the leadership of our President. Our Somalia policy is a mirror of our Africa opening policy. How we approach Somalia is how we approach all other African countries. "

Following Erdoğan's visit in 2011, as the prime minister at the time, the Somalia agenda for Ankara had become particularly busy. In line with the political engagement, the Turkish public has also paid particular attention to Somali as a destination of humanitarian help. In recent years, Turkey is also operating a hospital in Somalia, as well as other educational facilities, while TİKA runs educational, agriculture, infrastructure and water management projects across the country.

Tandoğan said that Turkey's presence and engagement in Somalia and Sudan has shown that a relationship "outside of the West-based algorithms" is possible.

Turkey was among the first countries to open an embassy in Sudan, after its independence in 1956. Erdoğan paid an official visit to Sudan last year, during which himself and the accompanying delegate received a very warm welcoming. Similar to Somalia, TİKA is also the co-operator of a hospital in Sudan. TİKA also started restoration works on Sudan's Suakin Island, northeast Sudan, after Erdoğan visited the country in December 2017.

"Sudan is an important member of the African Union and the Arab League. We have strong historical, religious, social and cultural ties. From this perspective, Sudan can be a candidate state for Turkey's gateway to Africa. Similarly, they see Turkey as Sudan's gateway to Asia and Europe," the Turkish ambassador to Sudan said.

Both Somalia and Sudan have been targets of terrorism and internal conflict for many years, causing large numbers of international displacements. Rich in natural resources, particularly gold, petroleum in Sudan and uranium in Somalia, the two countries have long been neglected by the Western world in terms of contributing to stability and bringing in long term solutions. Turkey, with its transfer of investment, know-how and the human capital, however, has contributed to the the post-conflict state-building in both of these countries."It is true, Somalia is still not a calm state. However, at least now a relative comfort is arriving in the country as well," Şeker said, and added that while other countries provide only financial aid, Turkey is also present in the field with its hard-working and effective human capital to contribute to the development in the respective countries.

Last year, Turkey also opened its largest overseas military training base in the Somali capital of Mogadishu, a move that would contribute to the security training of the country and also Turkey's strategic presence in east Africa. More than 10,000 Somali soldiers will be trained by some 200 Turkish officers at the base.