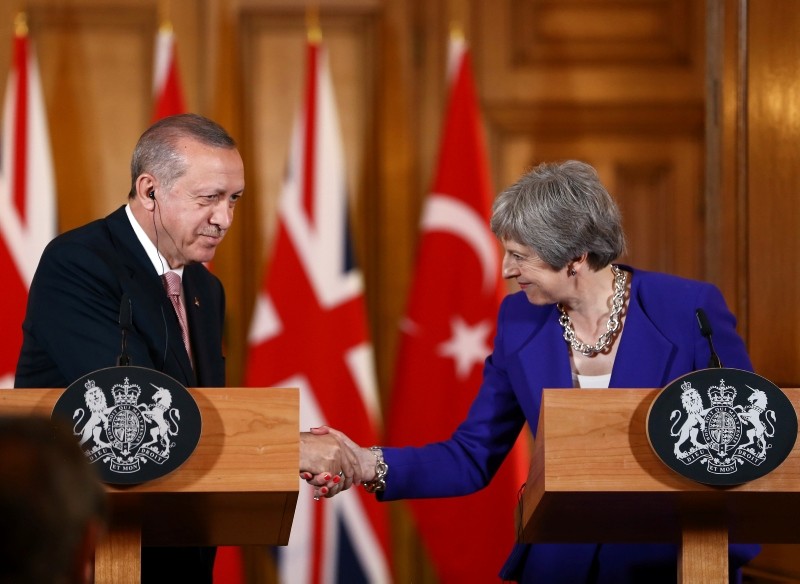 According to Turkish presidential sources, who spoke on condition of anonymity due to restrictions on talking to the media, Erdoğan and May also exchanged views on the areas of economy, trade and investment.

They agreed on a meeting between the Turkish Treasury and Finance Minister Berat Albayrak and his British counterpart Philip Hammond.

Erdoğan and May also discussed the latest developments in Syria, particularly in Idlib, the sources said.

President Erdoğan paid a three-day official visit to the U.K. in May. The president, who attended the seventh Turkish-British Tatlidil Forum in southern England, also met Queen Elizabeth II and British Prime Minister Theresa May.

In a press conference following his meeting with May, Erdoğan said the U.K. is the second biggest export market for Turkey, adding the trade volume between Turkey and the U.K. was at a level of $16 billion in 2017 but "our target for bilateral trade is $20 billion."

The bilateral trade between the two countries grew by 39 percent in January-March alone, reaching $5 billion.

May said Britain's relationship with Turkey was indispensable, praising the impact of security cooperation and the prospect of close post-Brexit trade ties.

As part of his visit to the country, Erdoğan also met with members of the British business world that have investments in Turkey or are seeking opportunities in the country at Bloomberg in London.

The United Kingdom has been among the countries with the most investments in Turkey by investing close to $10 billion directly in the country in the last 15 years.