Erdoğan to travel to Iran for Syria summit on Sept. 7 as initiatives for solution gain momentum 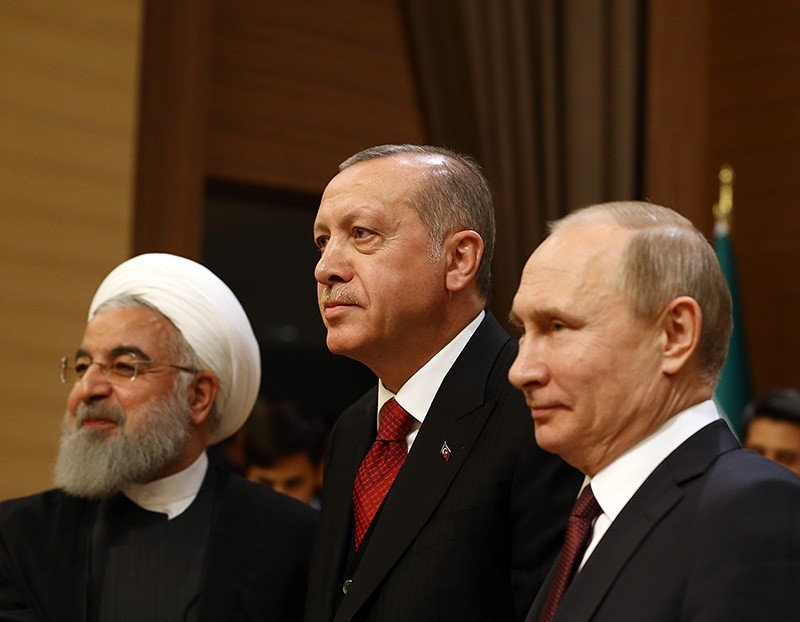 President Recep Tayyip Erdoğan will meet with his Russian and Iranian counterparts Vladimir Putin and Hassan Rouhani on Sept. 7 in Iran for their third tripartite summit on seeking to end the conflict in Syria, public broadcaster TRT Haber television said Monday.

The summit will be held in the northern Iranian city of Tabriz, it said.

In addition to talks in Tabriz, a meeting on Syria will take place in Istanbul, which will include the participation of senior delegations from Turkey, Russia, France and Germany take up a wide-ranging set of issues, including Syria and Iraq. Despite the exact date for the meeting is unknown yet, it is reportedly may take place in earlier September. The summit was first announced by Erdoğan on July 28 in Johannesburg, South Africa, where he attended the BRICS summit.

The three leaders have previously held summits in the Russian resort city of Sochi and the Turkish capital Ankara.

A major item on the agenda at the summit is expected to be the rebel-held northwestern Syrian province of Idlib which Assad wants to re-capture, to crown a string of military successes.

The Assad regime recently signaled that the province will be its main target, raising concerns about the safety of civilians and the moderate opposition.

The potential of an attack on Idlib also raises concerns for the security and safety of more than 3 million people living in the region. Experts have said that an offensive might spur on a new wave of refugees and bring new dimensions to the country's conflict.

Turkey has said a military operation to take Idlib risks provoking a humanitarian "catastrophe," warning that almost 3.5 million people are crammed into the region.

Foreign Minister Mevlüt Çavuşoğlu said Friday that a military solution in Idlib would be a disaster. In a joint press conference with his Russian counterpart Sergei Lavrov in Moscow, he said, "It would destroy the credibility of both Turkey and Russia on the matter of Syria."

Earlier in June, the United Nations said that a possible offensive by the Assad regime may result in the displacement of more than 2 million civilians, adding that the only route for those people would be to Turkey, which already hosts more than 3 million Syrian refugees.

The Assad regime is pushing the existence of the militant group Hay'at Tahrir al-Sham (HTS) in Idlib to justify a possible military offensive.

Along with Iranian-backed paramilitary groups on the ground, regime forces strengthened their positions around the province with batches of new deployments from other parts of the country.

Local reports have suggested that Turkish units continue to negotiate with HTS and other affiliated groups to convince them to dissolve and possibly leave the region.

Çavuşoğlu said that radical groups in Idlib disturb the moderate opposition and civilians. "They also caused difficulties for Turkey while it was establishing observation points. It is important for all of us to neutralize the radical terrorist groups. In order for a political solution, a constitution is a must," he said.

In an effort to restore calm in the region and improve the humanitarian situation in war-torn Syria, the three guarantor states Turkey, Iran and Russia launched the Astana process on Jan. 23, 2017, to complement the U.N.-brokered talks in Geneva.

Within this framework, Turkey, Iran and Russia agreed to establish de-escalation zones in Idlib and parts of neighboring Latakia, Hama and Aleppo. Under the Astana agreement, Turkey is to gradually establish 12 observation points from Idlib's north to south to monitor and sustain the current cease-fire agreement for the de-escalation zones, deliver humanitarian aid and ensure the secure return of displaced people.

In addition to talks in Tabriz, a high-level meeting on Syria will take place in Istanbul, which will include the participation of senior delegations from Turkey, Russia, France and Germany. The date for the meeting was initially set for Sept. 7, but the date may be re-scheduled.

The summit was first announced by Erdoğan on July 28 in Johannesburg, South Africa, where he attended the BRICS (Brazil, Russia, India, China and South Africa) summit. Erdoğan said that the four countries will take up a wide-ranging set of issues, including Syria and Iraq.