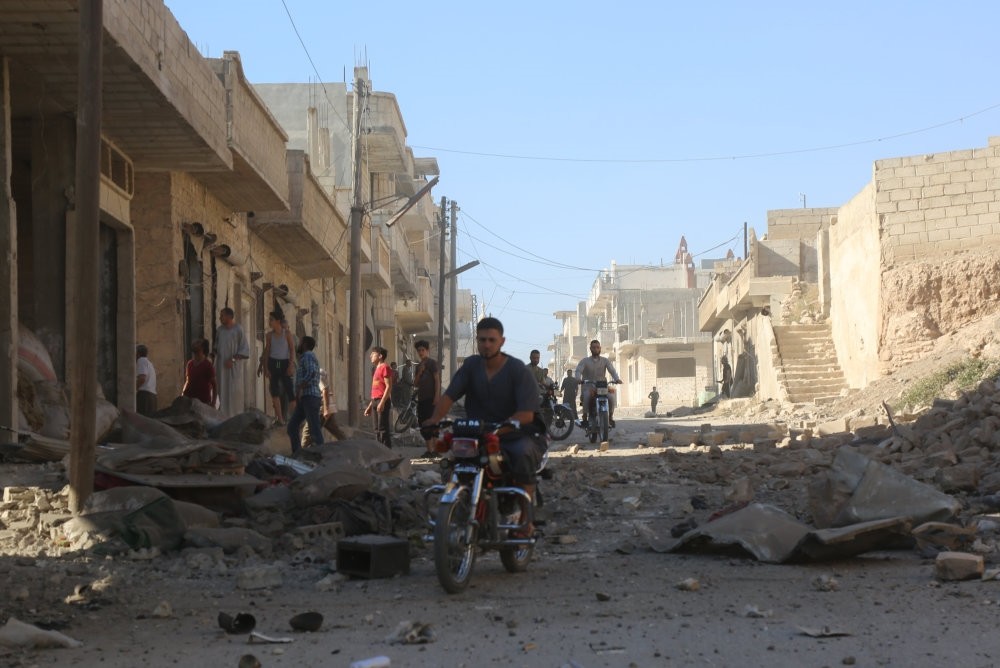 For the past two months, the Idlib de-escalation zone has been the target of fierce airstrikes by Russian and Syrian regime forces.
by Daily Sabah Sep 01, 2018 12:00 am

As the Syrian regime continues to signal a military intervention in Idlib, the last opposition stronghold in Syria, Turkey accelerates its efforts to avoid a humanitarian catastrophe in the region

Ankara has intensified its efforts against the possibility of a humanitarian catastrophe in Syria's Idlib province by a Syrian regime attack that would cause massive causalities.

The latest statement on the issue came from Foreign Minister Mevlüt Çavuşoğlu on Friday, as he once again said that such an attack would be a disaster for both Syria and Idlib. Meanwhile, truckloads of U.N. humanitarian aid entered through Cilvegözü Border Gate on Friday in Reyhanlı town of Hatay province in southern Turkey to be distributed to the needy in Idlib.

"There are a group of extremists here. We have been aware of that since the very beginning. They have been sent from Aleppo and other places deliberately. We need to work together to distinguish these groups from the others and neutralize them. This is the healthiest way [for a solution]," Çavuşoğlu said, during his visit to Vienna for an informal meeting of EU and candidate countries' foreign ministers.

"Otherwise," he added, "in terms of humanitarian perspective, there would be a serious problems in security, the future of Syria and a possible political solution."

Located near the Turkish border, Idlib was designated as a de-escalation zone in May where acts of aggression are expressly forbidden as part of the ongoing Astana process. Nevertheless, for the past two months, the Idlib de-escalation zone has been the target of fierce airstrikes by Russian and Assad forces.

Idlib and the surrounding region have a population of approximately 3.5 million, and a substantial part of it consists of refugees who fled different parts of the country. UNICEF previously said that food, water and medicine are already in short supply in the largely rural northwestern province, now home to millions of Syrians who have been displaced from their homes by regime offensives across the country.

President Recep Tayyip Erdoğan also said on Thursday that Turkey is working together with Russia and Iran to prevent another Aleppo-like disaster in Syria's Idlib.

"We are working with Russians and Iranians to prevent another Aleppo-like disaster in Idlib," Erdoğan said at a graduation ceremony at the Turkish Military Academy in Ankara.

In an effort to restore calm in the region and improve the humanitarian situation, the three guarantor states Turkey, Iran and Russia launched the Astana process on Jan. 23, 2017, to complement the U.N.-brokered talks in Geneva. Also, Turkey initiated another effort to find a solution in the area. Within this framework, the most senior representatives of Russia, France and Germany and Turkey will gather in Istanbul in September. This summit will start a parallel process that will contribute to the Astana process that was launched last year by Turkey, Russia and Iran.

The possibility of an attack does not cause tension only in Turkey. International organizations and many other states also expressed their concerns for the province, expressing their desire to prevent any catastrophe.

A major Syrian military offensive in the northern province of Idlib would spark a "humanitarian catastrophe," Germany warned on Friday.

"The federal government is very worried about the escalation of the situation in northwestern Syria," the government's deputy spokeswoman said during a news conference in Berlin.

"A large-scale military operation of the Syrian regime in and around Idlib would spark another humanitarian catastrophe with potentially hundreds of thousands of people seeking shelter near Turkey's border," Ulrike Demmer said. She recalled that Chancellor Angela Merkel had discussed these developments with Russian President Vladimir Putin two weeks ago.

"We expect from Russia to use its influence on the Syrian regime to prevent an escalation and a humanitarian catastrophe," she stressed. Demmer also underlined that unhindered humanitarian access to Idlib should be ensured.

U.N. Special Envoy for Syria Staffan de Mistura, on the other hand, called for Turkey, Russia and Iran to be given more time to avoid any possible military conflict in Idlib on Thursday.

Mistura warned that a "perfect storm" is approaching to Idlib, during his press conference in Geneva, saying that a possible conflict in the region has the potential to effuse outside Syrian borders. Mistura also said that both the government and the rebels had the ability to make chemical weapons. Meanwhile, the U.N. also escalated its humanitarian efforts for the province. Twenty-four rigs that are carrying humanitarian aid entered through the Cilvegözü Border Gate on Friday in Reyhanlı town of Hatay province in southern Turkey. It is reported that 480 tons of humanitarian aid will be distributed to the needy people in Idlib.

However, despite all the warnings and concerns from the international community, the Syrian regime does not seem to be willing to alter its position and is determined to start an operation in the province by overlooking civilian causalities. It is reported that Syria, in fear of a possible attack from the U.S., U.K. and France, has transferred all war planes to secure areas from military air bases. During an official visit to Moscow, Syrian Foreign Minister Walid Muallem warned the U.S., U.K. and France in case of a possible attack in Syria.

Speaking after a meeting with his Russian counterpart Sergei Lavrov, Muallem said on Thursday that the Syrian army will continue "till the end" in Idlib, while claiming that they will only target extremist militants. Muallem also said that Syria will not use chemical weapons in an upcoming operation and has no such weapons.

Lavrov also said on Friday that the Syrian regime had every right to chase "terrorists" out of Idlib, adding that talks were ongoing to set up humanitarian corridors there, the RIA and Interfax news agencies reported.

For Syrians, on the other hand, the cost of a possible military intervention causes massive concerns for their country. Syrian tribal leaders who came together in Hatay called for opposition groups in Idlib to lay down their arms. Speaking on behalf of the other tribal leaders, the leader of the Al Uqaydat tribe Sheikh Ammar Al Haddavi said that Syrians who took refuge in Idlib, escaping from the years long civil war, are living in great fear in case of military intervention in the province, and as the Syrian tribes, they will act in accordance with Turkey's position over the issue.