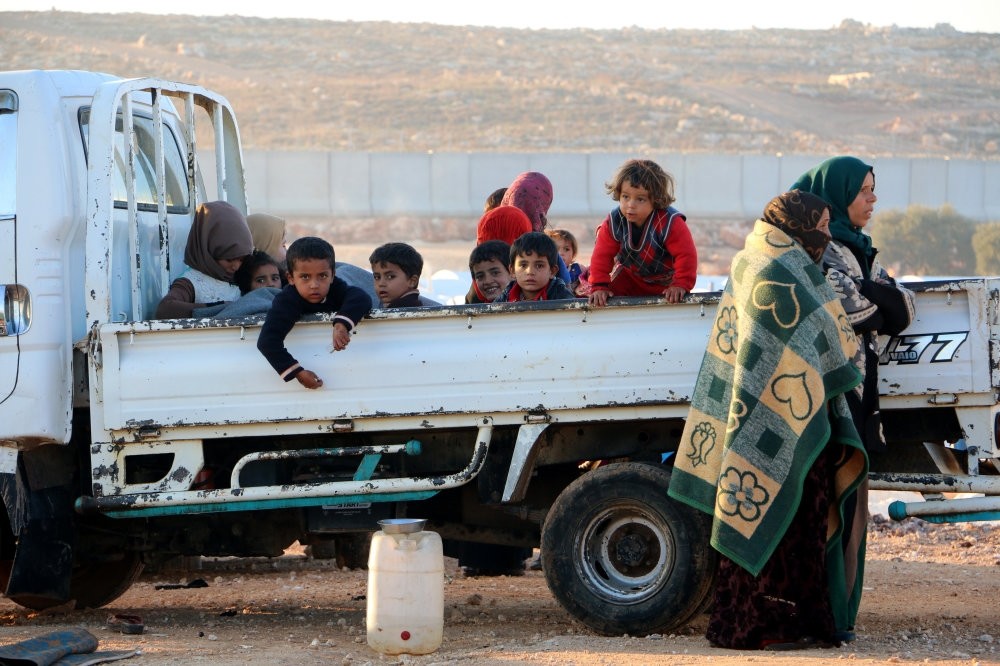 Civilians fleeing from southern Idlib to the northern part of the province in anticipation of a regime offensive.
by Daily Sabah Sep 04, 2018 12:00 am

An Assad regime attack on the last opposition stronghold in Idlib is reportedly close at hand, while international actors warn against massive causalities and a migration wave that would cause a new humanitarian catastrophe in the war-torn country

Diplomatic traffic has intensified on the negotiations on northwestern Syria's Idlib, amid rising concerns in the international community due to an imminent offensive by the Syrian regime. International actors have warned Syria's Bashar Assad regime and its backers, Russia and Iran, to hinder the offensive on Idlib due to the possibility of a humanitarian catastrophe that would cause massive causalities and a new migration wave. In a speech to EU ambassadors, the EU foreign policy chief, Federica Mogherini, said that an offensive by the Assad regime would bring destructive results on Syrian people who have been already suffering greatly due to civil war.

She added that EU should exercise the utmost effort to prevent the offensive.

Turkey has also increased its diplomatic efforts to solve the issue without a clash, and it has also built up military deployment near Idlib to secure the area in case of an offensive. Ankara continues its efforts to be in diplomatic touch with the relevant parties on the issue. One of the recent high-level meetings on Syria, a tripartite summit, will be held on Friday in Tehran with the participation of the presidents of Turkey, Russia and Iran. The Iranian Foreign Ministry yesterday said that an upcoming Tehran summit will be a "step toward peace, security and stability" in the war-torn country.

"It is not logical to imagine that the prolonged crisis in Syria would be resolved with a meeting but we believe that the only possible path to this situation is the political solution," Foreign Ministry spokesman Bahram Ghasemi said in his weekly press conference. The summit is scheduled to be held at the level of heads of state and foreign ministers as a follow-up to the Astana meeting held in Kazakhstan in mid-March.

In April, the leaders of the three countries, Recep Tayyip Erdoğan, Vladimir Putin and Hassan Rouhani, met in Ankara to discuss means of resolving the 7-year conflict in Syria. The three mediator countries are acting as guarantors of a proposed cease-fire in Syria and have been trying to push peace talks since 2016 to resolve the Syrian conflict.

Also, another high-level meeting will be held in Istanbul this month with the participation of delegations from Turkey, Russia, France and Germany.

Apart from Turkey, officials from Iran and Russia also pursue their own diplomatic meetings. Iranian Foreign Minister Javad Zarif, made a visit to Damascus yesterday and was received by Assad regime's Deputy Foreign Minister Faisal Mekdad. He was scheduled to meet later with Bashar Assad, according to the semi-official news agency ISNA. Russian Foreign Minister Sergey Lavrov, on the other hand, said yesterday in Moscow that it is not possible for Russia to tolerate the situation in Idlib indefinitely, and it is necessary to separate the armed opposition from terrorists. He added that they "are now taking the most active effort, together with our Turkish colleagues," to handle the situation.

French Foreign Minister Jean-Yves Le Drian also said that France will work with Turkey and Russia to find a solution to the situation in Idlib. "In the event of military clashes in Idlib the scale of the disaster in Aleppo can recede into the background," he told France Inter radio, noting that that France is working with the Astana group, which consists of Turkey,

Russia and Iran, to prevent bloodshed and find a political solution to the conflict in the last opposition stronghold.

In an effort to restore calm in the region and improve the humanitarian situation, the three guarantor states Turkey, Iran and Russia launched the Astana process on Jan. 23, 2017, to complement the U.N.-brokered talks in Geneva. Idlib is one of the de-escalation areas designated in the Astana talks between Turkey and the regime's allies Russia and Iran and has been turned into a shelter for opposition fighters and their families who were evacuated from different parts of the war-torn country. The French Foreign Minister further said that even if Assad's forces retake Idlib, that won't solve the problems that unleashed the war seven years ago. He reiterated threats of Western retaliation if Assad uses chemical weapons in Idlib. The U.S., the U.K. and France launched military strikes on the regime's bases in April 2017 after the regime used chemical weapons against civilians in the Damascus suburb Eastern Ghouta.