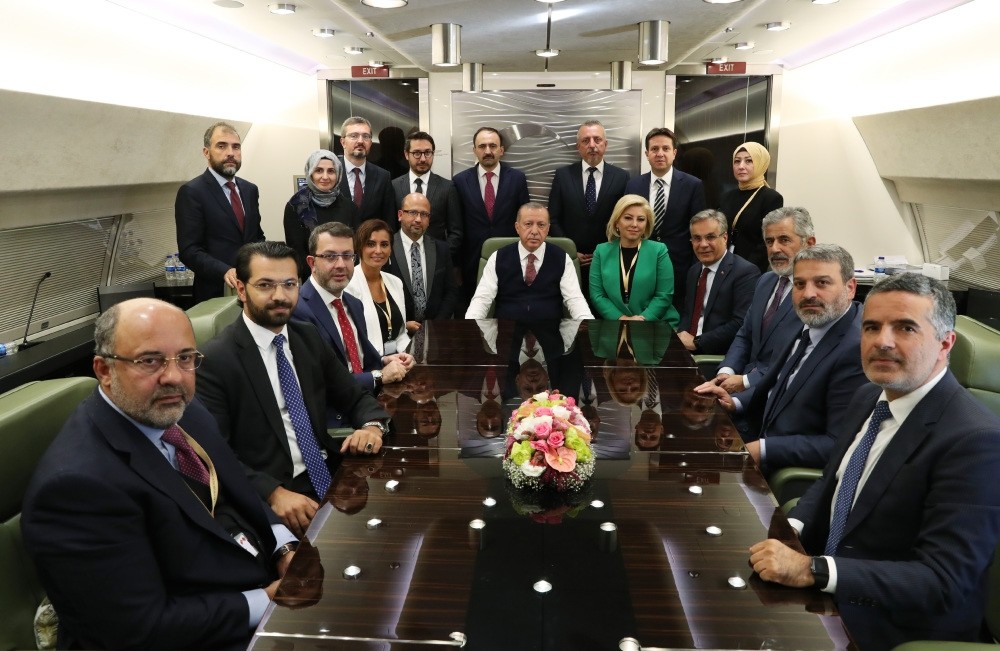 President Erdoğan urged de-escalation in Idlib, Syria amid possible attacks by the Assad regime, saying that it would cause a humanitarian catastrophe, lead to the massacre of civilians and a new refugee wave toward Turkey

An offensive on Syria's northwestern Idlib province by Bashar Assad's regime forces will lead to a bloodbath for civilians and a humanitarian tragedy, President Recep Tayyip Erdoğan said Tuesday to journalists accompanying him during his three-day official visit to Kyrgyzstan.

"There are about 3.5 million people there [Idlib]. Russia and the United States pass the buck to each other. However, God forbid, if missiles target the area, a serious massacre will take place," Erdoğan said, adding that a possible large-scale offensive would lead to a new wave of refugees toward Turkey. Since the breakout of the civil war in Syria, nearly 4 million Syrians have sought refuge in Turkey, causing a heavy economic and social burden on Turkey. Erdoğan added that Turkey has been in coordination with its Russian and Iranian counterparts to avoid the calamity in Idlib and de-escalate tensions. "As a result of the efforts, at least a partial ceasefire was established during the [Qurban] Bayram. We have 12 monitoring posts there and our forces continue their work with resolve," the president said.

"Above all, our cooperation with Russia right now is really important," he said adding that Turkish National Defense Minister Hulusi Akar and the Chief of National Intelligence Agency (MİT) have been meeting their counterparts in Russia to discuss the recent developments in Syria.

Russia and Iran are the main backers of Assad in the nearly 8-year-old conflict. Turkey, however, has been supporting the Free Syrian Army (FSA) in its cross border operations in Syria against Daesh and the PKK terrorist group's Syrian affiliate, the People's Protection Units (YPG) in northern Syria.

In addition to meetings on Idlib, the president said that there have been ongoing efforts on Tal Rifaat in northwestern Syria, and Manbij in northeastern Syria.

"The third phase of meetings on Idlib have been completed and today [yesterday] the fourth phase is underway. We can overcome this period with an on-point outcome coming from the meetings," Erdoğan said.

He added that a positive outcome is expected from the trilateral summit, scheduled for Sept. 7 in the Iranian capital Tehran, where Erdoğan, Russian President Vladimir Putin, and Iranian President Hassan Rouhani will be meeting. "Hopefully the Tehran Summit will lead to blocking the regime's aggression," Erdoğan said. The summit in Tehran was announced during the last trilateral summit of the three guarantor countries, Turkey, Iran and Russia, in Istanbul, which was a follow-up of meetings of leaders in the Russian resort town of Sochi.

During the peace talks in Astana in May 2017, the three guarantor countries agreed to establish de-escalation zones in Idlib and parts of Aleppo, Latakia and Hama provinces. Observation posts help establish, monitor and sustain the current ceasefire in de-escalation zones, deliver humanitarian aid to persons in need and to ensure the secure return of displaced people.

Erdoğan stated that the Astana process was not alternative to the U.N.-brokered Geneva peace talks on Syria.

Manbij deal with US not moving as desired

Erdoğan also commented on Ankara and Washington's deal on the withdrawal of the YPG from Manbij and stability in the province, saying that the process is not proceeding as effective as it should be.

with [U.S. Secretary of State Mike] Pompeo. The situation is being neglected. This is a reality we should acknowledge," Erdoğan said, criticizing the U.S.

Currently, Turkey and the U.S. are in the process of conducting joint and independent patrolling and monitoring in the regions where the YPG has withdrawn, as part of the deal reached between Çavuşoğlu and Pompeo in early June.

Ankara argues that Manbij is a predominantly Arab-populated province before it was occupied by the PKK's Syrian affiliate group and that once the road map is completed, an administration reflecting the true demographics of the region should be in control.

Erdoğan said he hopes to see more effective meetings between Turkish and the U.S. officials in the coming days to speed up the process in Manbij.

The president also criticized Washington's approach to the ongoing judicial process on American pastor Andrew Brunson, saying the U.S. should not be expecting extrajudicial demands from Turkey.

In September 2016, Brunson, a pastor of 20 years at the Evangelic Resurrection Church in the western city of İzmir, was arrested in Turkey for his alleged links to the PKK and the Gülenist Terror Group (FETÖ), who orchestrated an attempted coup on July 15, 2016. The incident has caused tension between Turkey and the U.S. as the latter aimed to pressure the country and interfere into the judicial process to release Brunson. Currently, Brunson is under house arrest in the western province of İzmir.

"It is not possible for us to meet a demand that is out of the fold of legal processes. Turkey is a state of law. Whatever a state of law necessitates, that will be done," the president said. He also said the U.S.' threatening attitude against Turkey was not in accordance with principles of alliance between Turkey and the U.S., two historic NATO allies.

The president said the arrest of a senior official from Turkey's state-owned bank, Halkbank, was a reflection of Washington's politically motivated moves against Ankara.

He also accused Washington of acting arbitrarily against Turkey, posing threats and not acting in line with what is historically called as the "strategic partnership" between Ankara and Washington. He said Washington has lacked in providing support to Turkey and "even when Turkey wanted to purchase weapons from the U.S."

Commenting on the presence of the Gülenist Terror Group (FETÖ) in Kyrgyzstan, a country where the cult group has strongly established itself, Erdoğan said the Turkish delegation voiced concerns and discussed the necessity of concrete steps against FETÖ with their counterparts in Bishkek.

"Unfortunately, there is a strong FETÖ foundation in Kyrgyzstan. They have infiltrated state institutions, beginning with the military and the judiciary. They have really frightened politicians here," Erdoğan said, adding that he told Kyrgyz authorities FETÖ is not only a threat for Turkey but for any country the group is able to operate in. He said the educational activities of the group should be halted in the country, and their administrations should be transferred to Turkey's Maarif Foundation.

Currently, the Maarif Foundation, which is responsible for Turkey's education activities abroad in coordination with the Education Ministry and Foreign Affairs Ministry, is working to take over FETÖ-linked schools abroad.

The president said Turkey will continue to voice its concerns about FETÖ in the international arena and warn other countries. He said the group has been active in about 160 countries globally.

During Erdoğan's visit, Kyrgyz President Sooronbay Jeenbekov had said his country has also acknowledged the threat of the group, which Turkey lists as a terrorist organization.

Erdoğan also said Turkey will continue to support Bishkek, particularly in the health sector. He added, however, that the bilateral trade volume between the two countries could be higher. He said the $485 million of bilateral trade should be increased to $1 billion. Erdoğan said 12 bilateral agreements were also signed during his visit to the country, where he also attended the 6th Summit Meeting of the Turkic Council, an international organization of Turkish-speaking countries.

Turkey-EU relations could be improved

Erdoğan said Turkey's ties with the EU, apart from bilateral relations with a few select countries, had room for improvement.

The president said he would be attaching great importance to his meeting with German Chancellor Angela Merkel at the end of this month. "We will have an opportunity to discuss many issues in Turkish-German relations. Germany has a significant position, indeed leadership, in the EU," Erdoğan said.

The recent thaw in bilateral relations between Ankara and Berlin has led to a number of upcoming high-level visits and increased dialogue. After German Foreign Minister Heiko Maas' visit to Turkey today, Erdoğan will travel to Germany in late September.

The president also criticized the EU's reneged promises on the refugee deal, calling on the bloc to fulfill its obligations in accordance to the agreement.

Turkey and the EU signed an agreement on March 18, 2016 to stem the influx of refugees to Europe. The deal included a 6-billion-euro aid package to help Turkey care for millions of refugees hosted in the country. The EU promised to initially allocate 3 billion euros in its first tranche for projects to support Syrian refugees. The deal was also to provide visa-free travel for Turkish citizens to the Schengen area; however, this is yet to be implemented.

Erdoğan also touched on the hostile attitude of some EU countries, particularly Austria, against Turkey, saying that Turkey has embraced a positive stance toward the bloc since 1963, when official talks were launched.