Tehran summit may be last chance to avoid bloodbath in Idlib 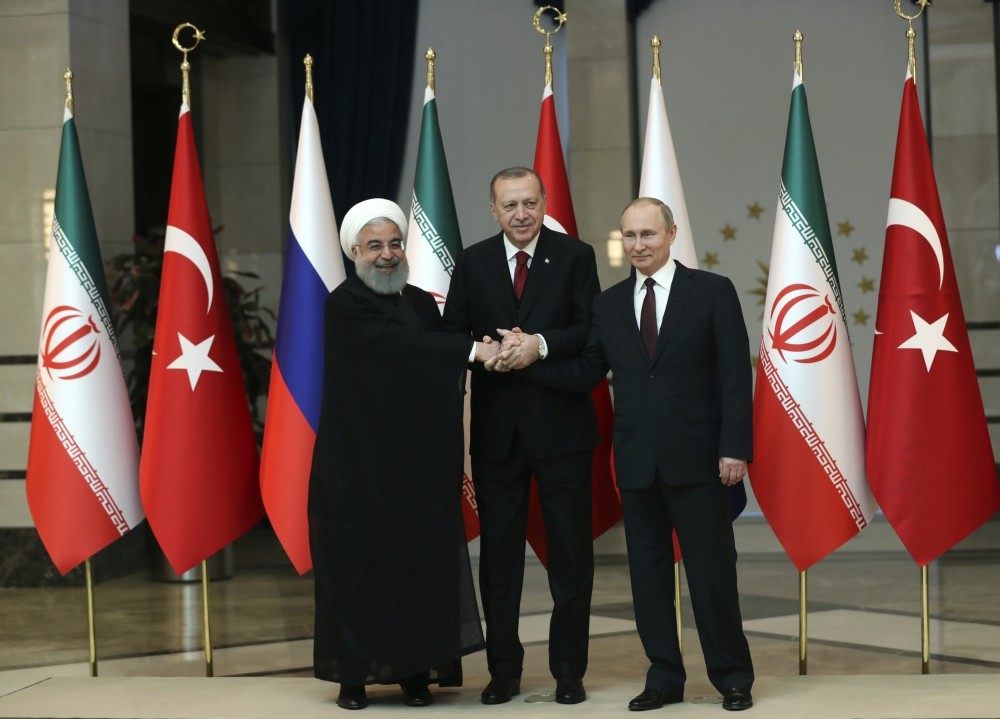 The presidents of Turkey, Russia and Iran meet today in Tehran, as part of the trilateral efforts on finding a solution to the Syrian civil war. Turkey will be pushing for a diplomatic solution to avert a humanitarian tragedy in the northwestern Idlib province, home to about 3 million people

The trilateral summit by Turkey, Russia and Iran is seen as the last hope for averting yet another humanitarian crisis in Syria's northwestern Idlib region. President Recep Tayyip Erdoğan is expected to strongly voice concerns against an inevitable bloodbath in case of a comprehensive operation in the region, a concern shared by Europe and the U.S as well. "In the summit that will be held in Tehran today, Turkey's priority will be to prevent a possible civilian slaughter in Idlib," Emre Erşen, an academic from Marmara University, said.

"As the situation for civilians in Idlib is not a top priority for other actors, civilians are laying their hopes on what Turkey will say in the summit," Erşen added. Erdoğan and Russian President Vladimir Putin will attend the trilateral summit that will be hosted by Iranian President Hassan Rouhani. According to presidential sources, the mutual efforts for the political process and the situation on the ground within the framework of the Astana process will be discussed in the summit. Erdoğan will also hold bilateral talks with Putin and Rouhani. Despite having different perspectives on Syria, Turkey and the Assad regime's main allies, Iran and Russia, launched the Syrian peace process in Astana, which aimed to complement the U.N.-brokered talks in Geneva, to bring an end to the almost seven-year conflict in the country.

Voicing concerns for civilians, Staffan de Mistura, the U.N.'s Syria envoy, called on Erdoğan and Putin to find a "soft solution to this crisis."

As part of the efforts to limit the violence in the country, Turkey, Russian and Iran had previously agreed to establish so-called de-escalation zones across Syria, including in the northern province of Idlib and parts of neighboring Latakia, Hama and Aleppo.

Under the Astana agreement, Turkey established 12 observation points from Idlib's north to south aiming to monitor and sustain the current cease-fire agreement for the de-escalation zones, deliver humanitarian aid and ensure the secure return of displaced people. The first of the trilateral summit at presidential level was held last year in Russia's Black Sea city Sochi on Nov. 22. Backed by Turkey, Russia, and Iran, a summit was then held in Sochi on Jan. 29-30. It was an attempt to bring all warring parties in the Syrian conflict, excluding the terrorist groups, to the table to facilitate the U.N.-sponsored peace talks in Geneva.

A proposal to form a constitutional committee was agreed by the representatives from the Syrian regime and the guarantor countries of Russia, Iran and Turkey. Parties at the two-day summit had said in a final statement that they wanted to bring an end to the ongoing conflict as soon as possible, and urged international help to that end. Following the summit Erdoğan and Putin also hailed the decision at Sochi to form a constitutional committee as its "most important outcome," asserting that the progress made at the meeting enhanced both the Astana and Geneva peace talks and U.N. Security Council resolutions. During the second trilateral summit that was held in Ankara on April 4, Erdoğan highlighted that "Syria's territorial integrity is indispensable."

In the joint statement by the leaders of Turkey, Iran and Russia, the need to end the fight in Syria was stressed and the significance of the Astana talks as an effective international initiative helping to reduce violence across Syria was underlined. The statement also pointed out the three countries' commitment to the "sovereignty, independence, unity, territorial integrity and non-sectarian character of Syria."

Meanwhile, in what was the latest move, Russian warplanes conducted airstrikes yesterday on Syria's Hama region. On Sept. 4, Russian warplanes also resumed airstrikes on Idlib, after a 22-day break. The attacks ahead of the trilateral summit drew criticism from Turkey. Foreign Minister Mevlüt Çavuşoğlu said on Wednesday that "we do not find it correct."

Yury Barmin, an expert on Russia, said: "It is clear that the Syrian government will capture some territory, but whether it happens by force or by agreement is to be decided at the summit. The main reason why the Syrian government is interested in Idlib is the strategic infrastructure, such as highways that connect Aleppo with Damascus and coastal areas." He added: "I think Russia's role here is to cushion the blow from this operation, and it is willing to meet concerns of both parties. A humanitarian crisis resulting from a military op in Idlib will work to Russia's disadvantage and threaten its partnership with Turkey."

Regime, its backers not concerned about civilians

While the Assad regime has been signaling an offensive to take control of the last opposition stronghold to declare victory in the civil war, Russia has been stressing that it "has the right to fight against terrorists." "We know from Russia and the regime's previous operations that civilians in the region are not part of their general strategy," Erşen said and highlighted that in the summit, Turkey might present constructive suggestions such as opening corridors or providing places for civilians in areas where Turkey previously conducted operations. Nihat Ali Özcan, from the TOBB University of Economics and Technology (ETÜ), stated that in the Tehran meeting, the sides might agree on a restricted operation which will attempt to carefully focus on eliminating terrorists.

Ankara has been repeatedly calling on sides to take joint steps in Idlib and prevent a catastrophe. Acknowledging the fact that there are radical groups and terrorists in Idlib, Turkey has been highlighting that there are more than 3 million civilians in the region and they need to be protected. It also added that the terrorists and moderate opposition need to be separated from each other. In relation to Russia's perspective over Syria, Erşen pointed out that "Russia intervened in the Syrian conflict in September 2015, and step by step it was able to achieve its objectives as the U.S. followed a vague policy. Taking control of Idlib and surrendering it to the regime would mean winning the war for Russia. Yet, it will not be easy to take control of Idlib."

He stated that, "Russia seems very decisive and does not want to take a step back. In its rhetoric, Russia has been particularly emphasizing that the [Hayat Tahrir al-Sham] HTS is linked to al-Qaida in order to reach its regional objectives." "A comprehensive operation in Idlib would substantially undermine the Astana process. Yet, Russia would not risk its ties with Turkey; Syria is one aspect of the relations, Russia would not allow disturbances to affect other aspects of the ties," Erşen underlined.