After a break in relations, Ankara and Berlin set to begin afresh 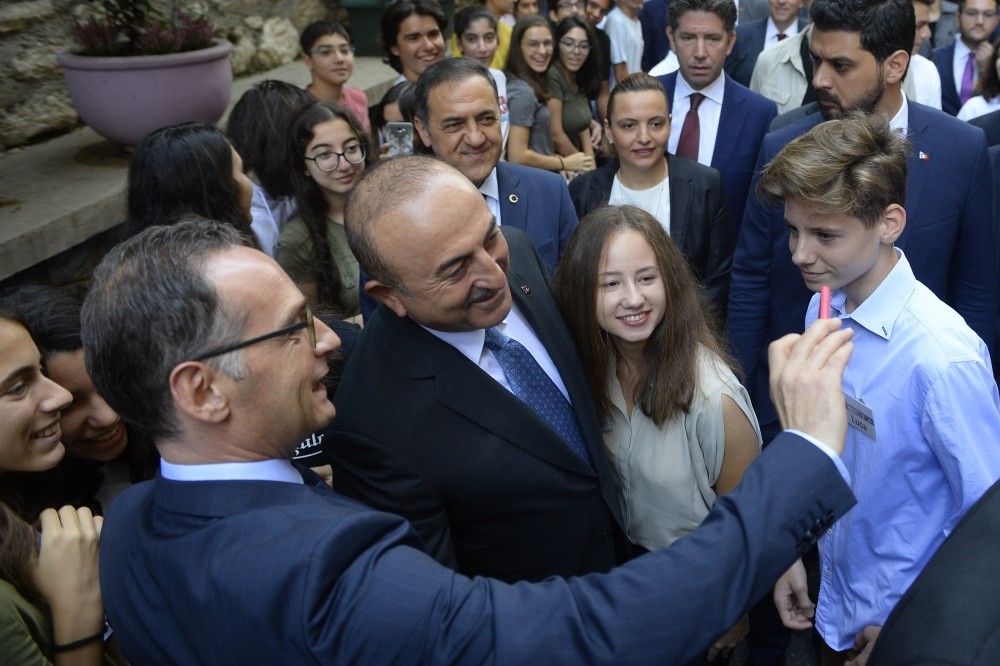 Foreign Minister Mevlu00fct u00c7avuu015fou011flu and German Foreign Minister Heiko Maas take a selfie with the students of the German high school in Istanbul, Sept. 6.
by Daily Sabah with Agencies Sep 07, 2018 12:00 am

The recent thaw in Ankara-Berlin relations was further expedited by the German foreign minister's visit to Turkey, laying the groundwork for upcoming diplomatic exchanges between the two countries

The Foreign ministers of Turkey and Germany emphasized strong bilateral relations in a groundbreaking visit of Berlin's top diplomat to the Turkish capital, Ankara, and the country's commercial capital, Istanbul, amid a thawing of long-strained ties. On the second day of his visit, German Foreign Minister Heiko Maas visited the German School in Istanbul to mark the 150th anniversary of its founding. The German foreign minister said at the event that if the bilateral relationship between Berlin and Ankara were "as good as at this school, [the two sides] would have accomplished a lot."

"The friendship between Turkey and Germany is a historic one, a deeply rooted one," Turkish Foreign Minister Mevlüt Çavuşoğlu said in an address to the students, adding that they would "surely contribute to the further growth and stability of this friendship."

He added that they made some crucial meetings with Maas in Ankara, discussing a range of issues including regional developments.

Maas arrived in Turkey on Wednesday for a two-day official visit. He met with President Recep Tayyip Erdoğan and his Turkish counterpart Çavuşoğlu in Ankara on Wednesday. Maas also visited Turkish Parliament where he was shown the courtyard that was bombed in July 2016 during the failed coup attempt.

In parallel with the thaw in bilateral relations, diplomatic traffic between the countries intensified. Maas' two-day trip will lay the groundwork for a state visit by Erdoğan to Germany on Sept. 28 and 29. Also, Treasury and Finance Minister Berat Albayrak, will visit Berlin on Sept. 21 to meet German Finance Minister Olaf Scholz. Economy Minister Peter Altmaier is also scheduled to visit Turkey in October.

The candid atmosphere of foreign ministers' meeting was crowned with German Chancellor Angela Merkel's warm messages on the relations.

In an interview with German RTL television, Merkel said yesterday Germany and Turkey should enhance dialogue and cooperation, despite their differences on a number of political topics.

"Germany has a strategic interest in sound economic development in Turkey. If we behave in a way that would weaken Turkey, that would not be in our interest," she said.

Merkel also dismissed criticism by German opposition parties on Erdoğan's planned visit to Berlin. "We cannot always think of the world in black and white terms. That is not the reality," she said adding that intensified talks between Berlin and Ankara are important to overcome current problems.

Turkish-German ties have recently been in a normalization process after the two countries were locked in heated debates and exchanged ultimatums for one-and-a-half years over a series of issues. While Ankara blames Berlin over its indifference on the presence of the PKK and the Gülenist Terror Group (FETÖ) in the country, the German side has long been demanding release of its citizens who were detained in Turkey on various charges.

Meanwhile, Maas also said late Wednesday that Turkey is right to be concerned over Idlib, adding that the German government supported the upcoming Tehran summit.

"Turkey is right in its concerns over Idlib, we support the Tehran summit and we are working together with Turkey to prevent escalation in Syria's Idlib region," the German top diplomat said during a press conference with Çavuşoğlu in Ankara.

Çavuşoğlu, commenting on the bombing of Idlib, said the move was wrong and such attacks should be stopped, adding that Ankara was going to push for a decision to stop such attacks during the summit on Friday.

He said Turkey did not bring radical groups to Idlib and questioned why those groups were brought to Idlib with their weapons from Aleppo, Eastern Ghouta and Homs.

"The plan was clear from the start. These groups will go there and then, by pretending the existence of those groups there, it [Assad regime] will attack to capture it," Çavuşoğlu said.

Çavuşoğlu also added that Turkey and Germany's position on Syria and other issues overlap.

Maas said those who will flee from Idlib should be helped. "We talked how we can help. Turkey is our important partner on this issue," he said.