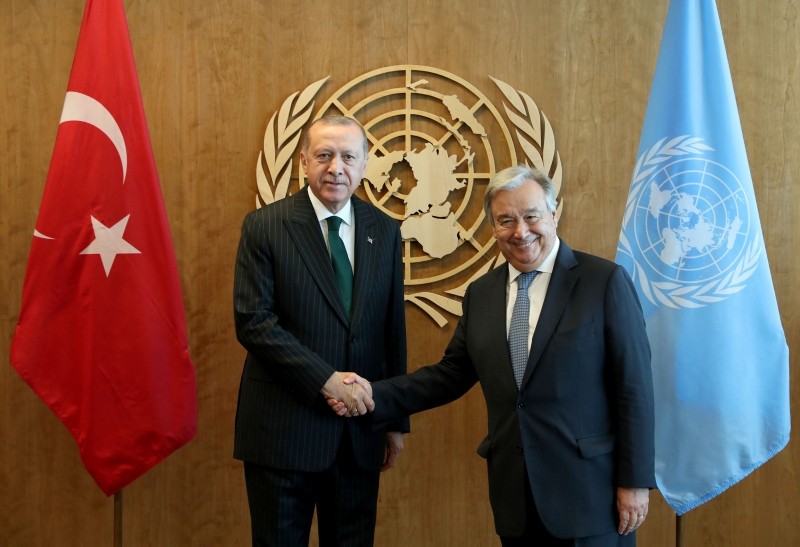 In a meeting with President Recep Tayyip Erdoğan at the U.N. headquarters in New York on Monday, Guterres also welcomed the Turkey-Russia agreement last week to establish a demilitarized zone in northwest Syria's Idlib.

After the meeting, a U.N. statement said that Guterres "commended the excellent U.N.-Turkish cooperation, including in support of Turkey's hosting of more than 3.5 million refugees."

Turkey and Russia signed a memorandum of understanding that calls for preserving the de-escalation zone in Idlib.

Erdoğan and Guterres also discussed measures taken for the de-escalation zone in Idlib as well as the political process in Syria.

Russia calls Idlib a hotbed of terrorism and says the Syrian regime has the right to retake control of it. Turkey has appealed to Russia and Iran for a diplomatic resolution to the ticking bomb. At the same time, it sent reinforcements to its troops surrounding Idlib, a move designed to ward off a ground assault, at least for now.

Idlib is home to over 3 million Syrians and an estimated 60,000 opposition fighters. The high population of civilians in the region had sparked fears that an offensive targeting Idlib would result in a humanitarian catastrophe. Therefore, the agreement between Russia and Turkey has been welcomed internationally.

Commenting on the deal previously, Guterres said, "If this deal can be implemented in the right way, 3 million civilians, including 1 million children, can be saved from a disaster."

He also underlined the importance of finding a political solution to the Syrian crisis. He called on all parties of the crisis to establish a constitutional committee while sticking to international humanitarian aid law and showing commitment to the protection of civilians. The agreement in Sochi raised fresh hopes for accelerating the political process.

Turkey has been hosting the largest number of Syrian refugees as the neighboring country. Since the beginning of the civil war, Turkey has gone to extensive lengths to alleviate the suffering of the refugees by providing shelter, food and medical treatment. Since Ankara has assumed a gigantic portion of the responsibility of meeting the needs of the Syrian refugees, it has called on the international community to shoulder more responsibility.