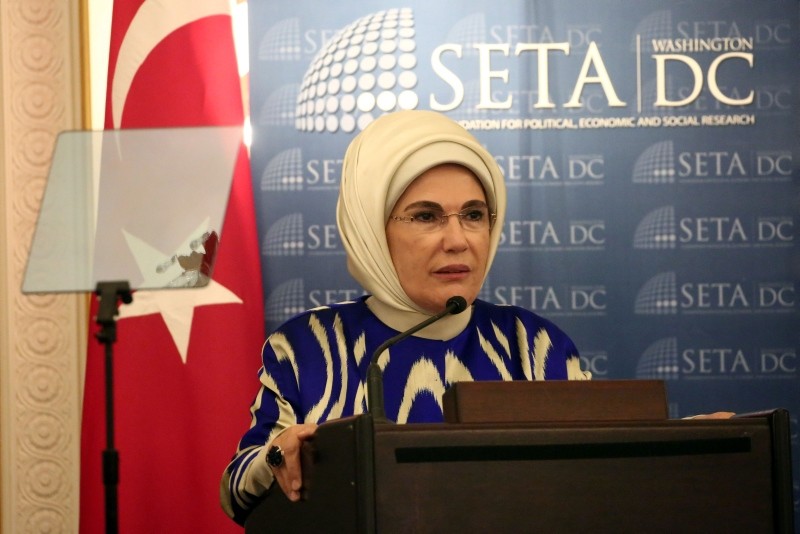 First lady Emine Erdoğan said Monday that Turkey's humanitarian aid is based on providing sustainability and development not for gathering credit and praise, emphasizing its position as the most charitable country in the world, according to data.

Speaking at a panel organized by the Turkish Foundation for Political, Economic and Social Research (SETA) in New York, Erdoğan said about 200 million people from 134 countries were in need of assistance in 2017, citing global humanitarian aid reports and added that the real number might actually be much higher.

"Our [Turkey's] vision of humanitarian aid is not about aid packages or vulnerable people waiting in line," said Erdoğan, adding the country's aid covers not only meeting basic needs but also prevention of crises and reducing dependency through development support.

"Therefore, humanitarian aid must also include efforts focusing on development," she said.

According to the U.K.-based Development Initiatives report titled "Global Humanitarian Assistance in 2017," Turkey spent close to $6 billion on humanitarian aid in 2016, coming only second after the U.S., which spent $6.3 billion, and was listed as the most generous country for spending 0.75 percent of its gross national income on humanitarian causes.

Turning to Syrian refugees living in Turkey, who number more than 3 million and more than half of whom are women and children, Erdoğan said Ankara does not provide shelter alone.

"We place special importance on teaching women a profession to help their survival. We provide courses in many areas ranging from hairdressing to computer skills.

"We rehabilitate women who have suffered in the war through development programs and hobby courses and help them discover their potential," she added.

As for children, she said, Turkey works to ensure that they are provided with education and young Syrian people are able to pursue their university studies.

She recalled that Turkey is also providing development aid to Africa.

"In other words, we are, to use a popular phrase, teaching them how to fish instead of providing the fish. We provide training and equipment to Africa that will help them discover their own potential," she added.

Syria has only just begun to emerge from a devastating conflict that began in 2011 when the Bashar Assad regime cracked down on demonstrators with unexpected ferocity.