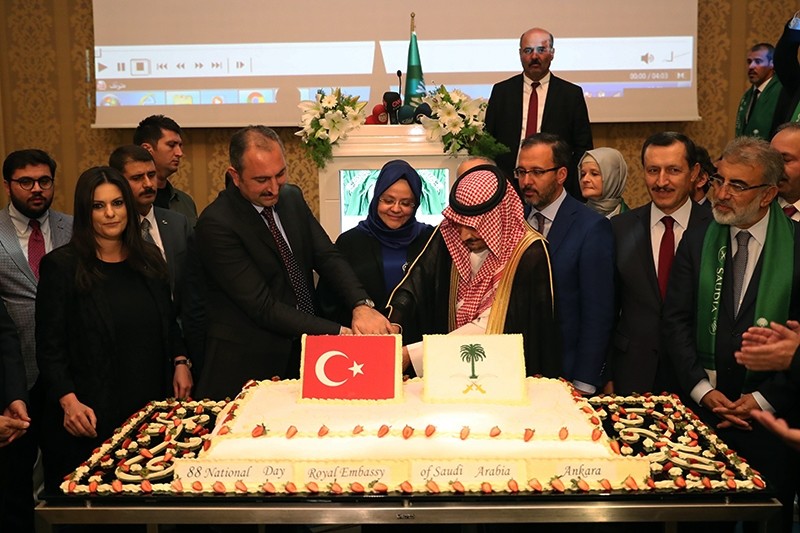 The Saudi Embassy in Ankara on Monday marked the kingdom's National Day with an event attended by a number of Turkish officials and dignitaries.

Speaking at the event, Saudi Ambassador to Ankara Waleed al-Khereiji said: "At the time we are marking the 88th anniversary of our kingdom's establishment [...] we hope that the country's Vision 2030 will put Saudi Arabia among the advanced states."

Regarding his country's relations with Turkey, al-Khereiji said: "Saudi Arabia and Turkey are two important states in the region since they are linked by historical relations and share religious and cultural values."

The Saudi diplomat went on to affirm that "the cooperation between Turkey and Saudi Arabia will benefit the whole region because of the influence they have."

For his part, Gül congratulated Saudi Arabia on its National Day and said: "Turkey and Saudi Arabia have deep-rooted relations that are based on mutual respect."

"We see Saudi Arabia as a country that has a strategic influence in the region," Gül said.

He noted that the first Turkish-Saudi Coordination Council meeting was held in Ankara in February 2017 and said his country hopes the next meeting will be held in Riyadh soon.

"We are glad that the number of Saudi tourists increased by 31 percent in the first seven months of this year compared with last year," he said.

Gül also congratulated the Saudi kingdom over "the success of this year's Hajj season."

Saudi National Day is marked every year on Sep. 23 to commemorate the founding of the Kingdom of Saudi Arabia by King Abdul Aziz Al-Saud in 1932.