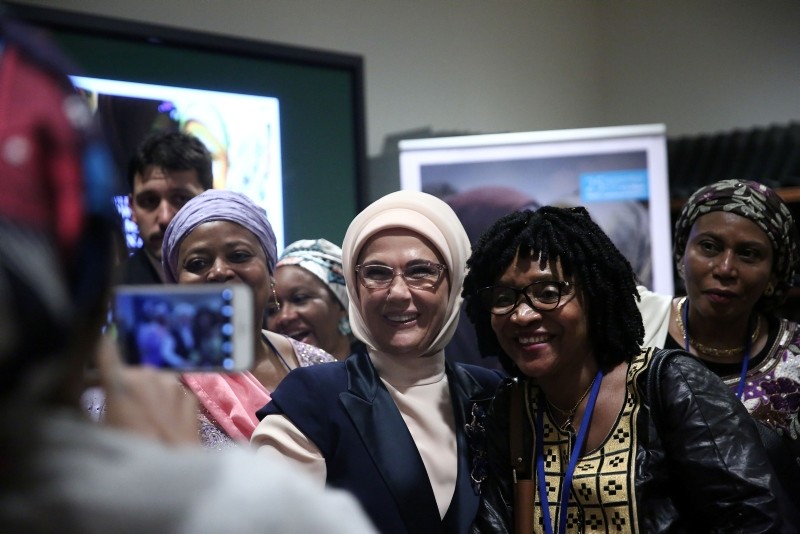 Speaking during a meeting on African girls and women in New York, where a United Nations General Assembly was held earlier in the same day, she added that Turkish people have been historically tied to the continent and see its people as friendly.

"Every voice that comes from Africa resonates in Turkey," she said.

Slamming the racist and imperialist policies imposed upon the continent in the last century, Erdoğan asserted that the 21st century should not be the same.

"As Turkey, we believe that the 21st century will be the era of Africa," she said.

Touching upon Turkish initiatives to help the continent, Erdoğan further said that Turkey has increased its diplomatic presence in Africa as well as humanitarian assistance in various fields through Turkish aid groups.

Turkey has already created a number of investments on the continent, including a maternal and child health care center in Niger, women's shelters in Cameroon and a vocational training center in Madagascar.

Erdoğan has worked on numerous humanitarian projects around the world. She received The Humanitarian Service Recognition Award by the Global Donors Forum in London earlier this month.

In an op-ed published Tuesday in Al Jazeera, Erdoğan said women's empowerment was the key to solving Africa's problems.

She said women were disproportionately affected by Africa's problems and that Turkey is creating projects to invest in women in areas of poverty, education and economics.

"Having strengthened its relations with the continent in recent years, Turkey found the answer: women's empowerment. This is the key to solving pressing problems in Africa," she said.

Erdoğan noted that half of the women's population in Africa remain illiterate, and 3,000 young girls from 46 African countries received scholarships at Turkish institutions.

In recent years, 362 women who received their degrees in Turkey returned to their country to serve as doctors, engineers and lawyers.

"It is also absolutely vital to create economic opportunities for African women if they are to become agents of change in their communities," Erdoğan said.

When it comes to economic opportunities, the first lady discussed that African women must be given a platform to sell their products at a fair price.

She said that projects in Africa are important to Turkey, which seeks to work with Africans to help address their problems.

"Turkey's development efforts in Africa, which attach special importance to empowering women, seek to inspire African solutions to African problems. They reflect a popular African proverb: 'Until the lion learns how to write, every story will glorify the hunter'," she added.

Since 2002, Turkey has ramped up the number of its embassies in the continent from 12 to 41.