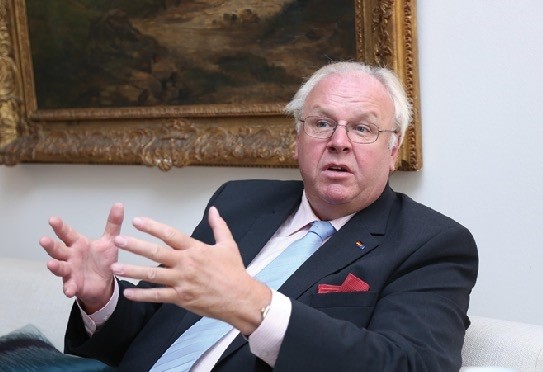 Erdou011fanu2019s visit reflects the willingness on both sides to normalize the recently strained relationship, German envoy to Ankara Martin Erdmann said.
by Yunus Paksoy Sep 27, 2018 12:00 am

Turkey and Germany are two countries that have been and are bound by solid bridges, and President Recep Tayyip Erdoğan's visit later this week to Berlin is an outstanding opportunity to reach better ties, as well as a message of solidarity to the whole world, said the German ambassador to Ankara. "The upcoming state visit represents an outstanding event in our bilateral relations. It reflects the willingness on both sides to normalize our relationship. And it sends an important signal to the world: Germany and Turkey are two nations connected by solid bridges, both historically and present. And it shows: we may go through stormy times – but our interest of working together closely always prevails," Ambassador Martin Erdmann said in an exclusive interview with Daily Sabah.

For the past couple of years, relations between Ankara and Berlin experienced more downs than ups due to a series of issues emanating from the expectations of both sides. Ultimatums and a harsh exchange of words caused ties to hit rock bottom. However, the tide has seemed to turn recently.

Erdmann is of the opinion that a strong Turkey means a strong Germany despite critical views on both sides. "For Germany, Turkey is much more than a neighbor. We have strong economic ties, we are partners in NATO and there is a very strong human bridge between our two countries. It is in Germany's strategic interest to maintain good relations with Turkey. As I mentioned before, there are developments in Turkey that Germany is critical of and there were several irritations in our bilateral relations," Erdmann said. The ambassador intends to perceive Erdoğan's visit as a vital chance to work out differences of opinion. "This upcoming state visit is a very important step on the way to the normalization of the relations and we are willing to continue to work hard on that," he added.

Turkish and German officials, indeed, had been exchanging words back and forth through the media during the nearly two-year-long crisis. Yet, Erdmann said that the two sides learned their lesson.

"This upcoming state visit and the visits that have recently taken place and the ones that are planned for the near future show that Germany and Turkey have clearly understood that we have to talk to each other and not about each other. Megaphone diplomacy is not the right tool," he said.

However, he underscored that there is still work to be done. "This constructive approach is even more important when we dissent from each other. In conclusion: A lot of ice has melted since the end of 2017 but there is still some work ahead of us."

Turkey has been challenged by grueling economic hardships recently. Germany, indeed, has been one of the first countries to extend a helping hand to Turkey by way of public statements from high-ranking officials. With its undeniable and crucial role in European politics, Turkey's economic outlook alarmed the eurozone as well. "As chancellor Merkel mentioned in a public statement recently, a stable and prosperous Turkey is in Germany's interest. The German government is closely following the economic difficulties Turkey has been facing for some time now."

In spite of Berlin's supportive tone, Erdmann argued that a side of the economic problems must be sorted out with reforms. "However, we are convinced that besides an unfavorable international environment a relevant part of the problem is homemade. It will be pivotal for the Turkish government to implement sound reforms in the economic sector and create an environment supportive to overcome the difficulties, such as investment security."

Relations between Turkey and the EU have been in the freezer for a while even though the two sides inked a March 2016 deal to stem the flow of refugees to the Schengen zone. As part of the deal, Turkey pledged to stem the flow and in return the EU promised Turkey the opening of some chapters in its bid to become a full member and finalize visa liberalization. However, Europe failed to keep its pledges according to Ankara.

Now that Ankara-Berlin ties are warming, Erdmann was asked whether a warming in Ankara-Brussels ties can be expected too. "Germany in particular is very much interested in good relations with Turkey, not only because of 3 million citizens of Turkish origin living in Germany, and many more that once lived there and returned to Turkey. Also Turkey is an important trade partner for us and we are the most important export partner for Turkey," Erdmann said.

The German ambassador spoke affirmatively regarding the mutually beneficial character of key processes, such as updating the customs union and visa liberalization.

"An update to the customs union would be in the mutual interest of both countries. However, in this case, as also in the case of visa liberalization, there are clear requirements to be met. Germany will support progress in these areas, as soon as the conditions are met. A strengthening of the rule of law and democratic standards will be of particular importance. In the end, a modernization of the customs union and closer people to people relations through facilitating traveling would be in our mutual interest," the ambassador said. Erdmann hailed the recent initiative by four Turkish ministers to bring Turkey's EU bid to a whole new level. That being said, citing German concerns regarding the rule of law and democratic standards on the topic of moving forward with the EU membership, the German envoy expressed his belief that it could be overcome. "I believe that we can overcome the setbacks and controversies of the past if there is a genuine political will to do so," he concluded.