Turkey, Germany need each other to weather current round of global crises 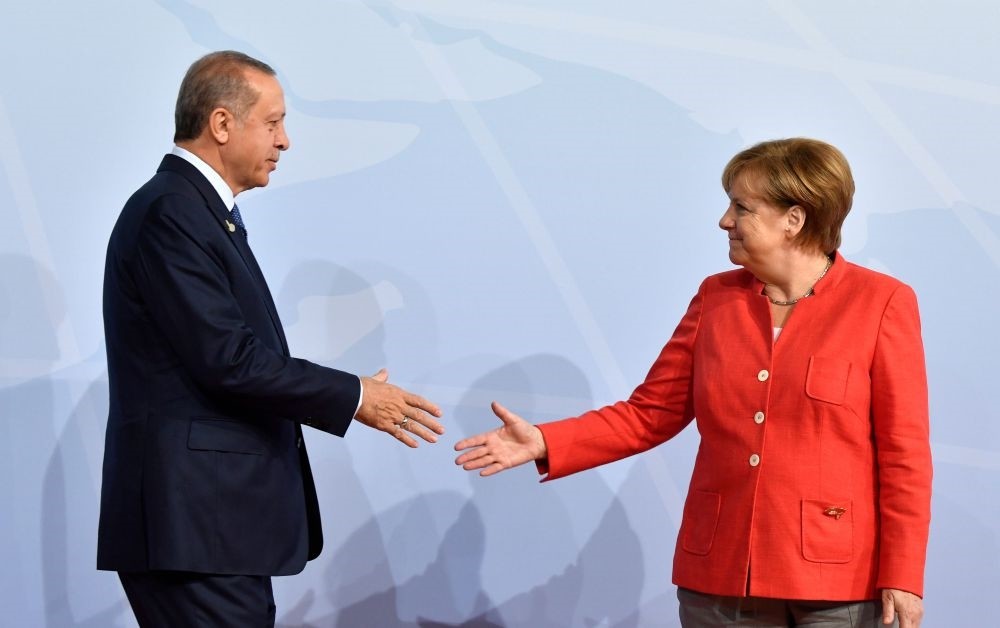 President Recep Tayyip Erdoğan's visit to Germany, which is the first state visit from Turkey after a seven-year hiatus, has raised fresh hopes that the two countries will keep up dialogue to focus on mending past fissures. Highlighting that Ankara and Berlin are both showing a desire to normalize ties, political experts said that this would be a rational step because the two countries need each other's support and cooperation considering the current state of global politics.

"In an environment where Ankara and Berlin have been losing trust in the United States, the issues of security, energy, economy and the Syrian crisis have been pushing Germany and Turkey together," Kemal İnat, an academic at Sakarya University focusing on Germany, said. "The countries need each other as they both face various risks in the international arena, particularly stemming from their relations with the U.S.," İnat stressed. Erdoğan, following his trip to the U.S., will be in Germany for a three-day visit on Sept. 27-29, at the invitation of President Frank-Walter Steinmeier. In addition to a meeting with Steinmeier, Erdoğan will also come together with Chancellor Angela Merkel.

"We want to completely leave behind all the problems and create a warm environment between Turkey and Germany just like it used to be. We will discuss in detail our bilateral relations, regional political difficulties, and issues including economy and tourism," Erdoğan said in an interview with Reuters, which was published Wednesday.

The Turkish president also said Turkey aims to restore economic relations that had a tremendous trade volume prior to the bitter diplomatic spat between the two countries.

In Germany, Erdoğan is expected to address representatives of nongovernmental organizations and executives of leading German companies at the Turkey-Germany Business Council. The President will also inaugurate the Turkish-Islamic Union for Religious Affairs (DİTİB) Central Mosque in Cologne and come together with the Turkish community in Germany.

"The relations between Turkey and Germany had been strained in recent years due to political issues particularly during the election periods. Berlin's stance toward the PKK terrorist group and the Gülenist Terror Group (FETÖ), which orchestrated a failed coup attempt in Turkey failed to address the concerns of Ankara which resulted in stoking the tensions," İnat said.

Previously, Ankara voiced strong criticism regarding PKK demonstrations and the presence of the terrorist organization's seniors in Germany, which Ankara labels as a tolerance of terrorism. Mustafa Yeneroğlu, a member of the Justice and Development Party's (AK Party) Central Decision and Executive Board (MKYK) who holds dual Turkish-German citizenship told Daily Sabah, "President Erdoğan expressed Turkey's will to turn a new page in ties with Germany considering the deep-rooted Turkish-German relations, strong economic ties and over three million Turkish people living in Germany."

Highlighting that the sympathizers and supporters of the PKK terror group have been attempting to create a negative atmosphere against Turkey and Erdoğan's visit, Yeneroğlu said "this is not the stance of the German government."

The Turkish government also blames the German state for harboring, aiding and abetting FETÖ. So far, hundreds of high-ranking Gülenists and fugitive putschists were granted asylum by German authorities. Yet, the regional and international issues have been calling for the sides to increase cooperation. In relation to the issue, Yeneroğlu underscored that Turkey's expectations from Germany regarding its stance toward the PKK and FETÖ members have not been met. He stated that in the upcoming period Germany and Turkey will discuss these issues in detail.

"Our interior minister will pay a visit to Germany in October as well," Yeneroğlu added. İnat underscored that currently the two countries are taking rational steps to leave behind the tensions as they aim to increase cooperation in the fields of security, economy and others. İnat also added that Erdoğan's visit would contribute to Turkey's overall ties with the EU as well. "We will have an opportunity to discuss many issues in Turkish-German relations. Germany has a significant position, indeed leadership, in the EU," Erdoğan told members of the Turkish press accompanying him during his visit to Kyrgyzstan earlier this month. With an aim of thawing the icy relations, high-level officials have been signaling their willingness to increase dialogue. In his visit to Ankara in early September, German Foreign Minister Heiko Maas highlighted Germany's determination to keep working on improving relations with Turkey.

Recent developments in the region, particularly the crisis in Syria, have put both countries in a situation that needs cooperation. A large number of refugees escaping from conflict zones in Syria and Iraq have sought to cross into European countries, particularly Germany. Facing a wave of refugees, EU countries have had challenges in the management of the humanitarian crisis within their borders, given their domestic politics and the rise of xenophobia in the West. In return, EU countries have turned to Turkey to block the flow of refugees from Syria and Iraq through a deal signed in March 2016.

"Mutual responsibilities and targets, the current situation in the Middle East, the common concerns for the future of Europe must be prioritized in bilateral ties," Yeneroğlu stated, pointing to the need of cooperation between Ankara and Berlin.

Commenting on the two sides' cooperation in the refugee crisis, İnat also said, "The two countries reached an agreement in 2016 regarding the refugees. We can say that the two sides have been working efficiently." He underlined that Ankara expects more cooperation.

Since Ankara has assumed a gigantic portion of the responsibility of meeting the needs of the Syrian refugees, it has called on the international community to shoulder more responsibility.

Turkey and EU signed an agreement on March 18, 2016, to stem the inflow of refugees to Europe, which is considered unbearable by the EU. Turkey has been the main route for refugees trying to cross into Europe since the beginning of the civil war in Syria. With the agreement, irregular arrivals decreased by 99 percent; it also prevented the loss of many lives on the sea. The deal included a 6-billion-euro aid package to help Turkey care for millions of refugees hosted in the country, and the EU promised to initially allocate 3 billion euros in its first tranche for projects to support Syrian refugees.

Meanwhile, Germany's government spokesperson Steffen Seibert emphasized Wednesday that Turkey is a crucial partner for both Germany and Europe. Speaking at a press conference in Berlin, Seibert said that in the meetings to take place during Erdoğan's visit, the mutual benefits of both countries will be the main subject.

The spokesperson said the Turkish population in Germany made the relationship between the two countries quite special.

In relation to the developments in the field of energy, he said, "In a recent move, Poland and the U.S. reached an understanding for preventing the Nord Stream 2, which is expected to increase natural gas volumes pumped from Russia to Germany through the Baltic Sea.

Germany considers the move of its NATO ally the U.S. and its EU partner Poland as hostile." Inat added that Germany has been looking for alternative routes for natural gas and that Turkey seems to be a good alternative. Accordingly, Germany might consider reviving the Trans-Anatolian Natural Gas Pipeline (TANAP), he said.