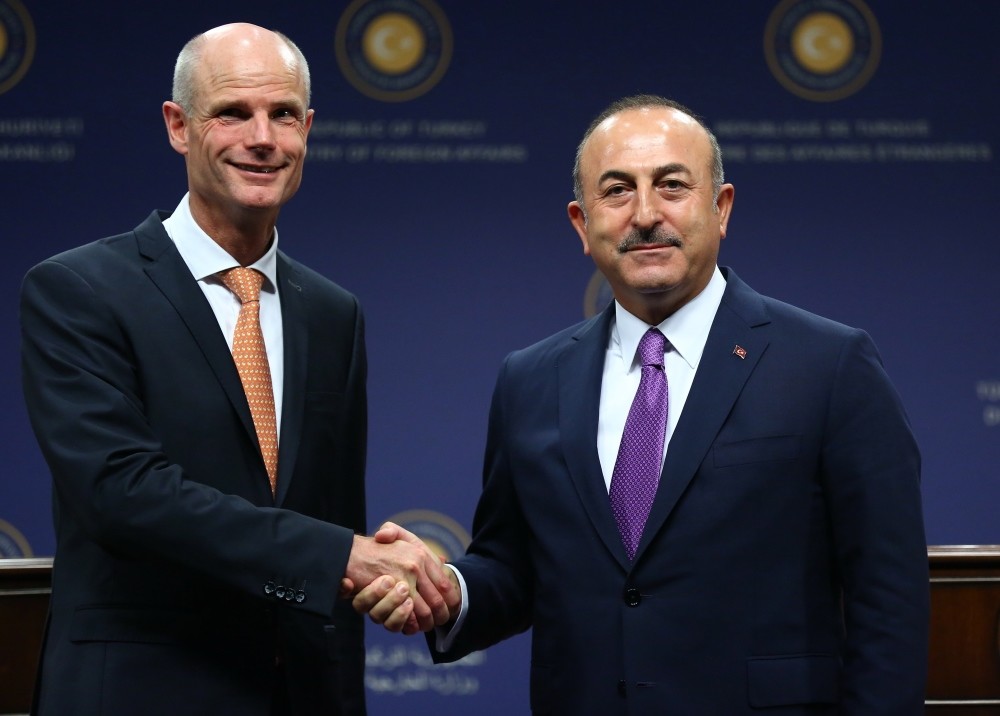 A new period in Turkish, Dutch relations begins as the foreign ministers of both countries met yesterday, expressing their willingness to focus on a positive agenda and improve bilateral ties

Turkey and the Netherlands have voiced their joint resolve to mend battered ties as the foreign ministers of the two countries said yesterday that the sides are eager to turn a new page in relations.

Speaking at a joint press conference with his Dutch counterpart Stef Blok, Foreign Minister Mevlüt Çavuşoğlu said yesterday that "we want to improve our ties with the Netherlands focusing on a positive agenda," and added that the meeting with his counterpart was candid and constructive.

Çavuşoğlu highlighted that in order to make up for the two years of strained ties, the two sides will step up their efforts to improve relations. He added that he would like to visit the Netherlands in the upcoming period as well.

Stressing the deep-rooted ties between Turkey and the Netherlands, Blok stated that relations have been continuing for 400 years. He underlined that he welcomed the recent positive ties such as the appointment of ambassadors.

On July 20, Turkey and the Netherlands decided to restore ties which were strained for more than a year. Following the meeting of Çavuşoğlu and Blok on Aug. 31 as part of the Gymnich meeting in Vienna, the two ministers highlighted that the countries would accelerate efforts for reconciliation. Accordingly, the sides appointed their respective ambassadors in September. Şaban Dişli, a former Justice and Development Party (AK Party) deputy, became Turkey's new ambassador to The Hague, while the Netherlands appointed Marjanne de Kwaasteniet as the ambassador to Turkey. Kwaasteniet was serving as the Netherlands' permanent representative to NATO.

The incident occurred shortly before the Dutch general elections on March 15, 2017, and the Turkish constitutional reform and presidential system referendum on April 16, 2017.

Turkey withdrew its ambassador to The Hague after the incident, while Dutch Ambassador Cornelis Van Rij, was recalled to the Netherlands for consultations, after Ankara asked him not to return for a while, was not allowed back into Turkey. The Dutch Foreign Ministry finally withdrew the envoy in February.

The recent joint resolve to get political ties back on track have been welcomed by many and considered as a significant step which might also boost Ankara's ties with the European Union. Commenting on the issue, Çavuşoğlu stated that the refugee deal between Turkey and the EU was signed during the term presidency of the Netherlands, back in 2016.

"There have been ongoing joint efforts about visa liberalization and customs union with the EU and the support of the Netherlands is significant," Çavuşoğlu also said.

He underscored that Turkey is resolute in improving ties with the EU and he added that "the EU is also presenting same stance." Turkish-Dutch ties date back to 17th century. The diplomatic relations were formed when the first Dutch envoy, Cornelis Haga, was assigned to the Ottoman Empire and arrived in Istanbul in 1612. The first permanent envoy of the Ottoman Empire was Yahya Karaca Pasha, who assumed his duty as the Turkish Ambassador at The Hague in 1859.

As Turkey and Russia reached an agreement last month to preserve the de-escalation zone and establish a demilitarized zone in Syria's Idlib, where nearly 3 million civilians live, the deal was internationally welcomed as it was considered to have prevented a humanitarian disaster. Regarding the developments in Idlib, Blok said "Turkey has played a significant and key role." He added that he congratulates Turkey for its success in preventing the crisis. The Dutch envoy also underlined that Turkey's efforts for the Syrian refugees needs to be appreciated.

Located near the Turkish border, Idlib is home to more than 3 million Syrians, many of whom are internally displaced people running away from the Bashar Assad regime.

In relation to the economic ties between the two countries, Çavuşoğlu pointed out that in the upcoming period he expects enhancing of economic relations.

He also said that the Netherlands is the number one direct investor in Turkey and added that the Foreign Economic Relations Board (DEİK) has agreed with the officials from the Dutch side to hold a meeting in the upcoming period.

Highlighting that Turkey has potential for reaching momentum, Blok said, "I know that there are people in the Netherlands who would like to make investments. We would like to improve our economic ties by using a joint economic commission."