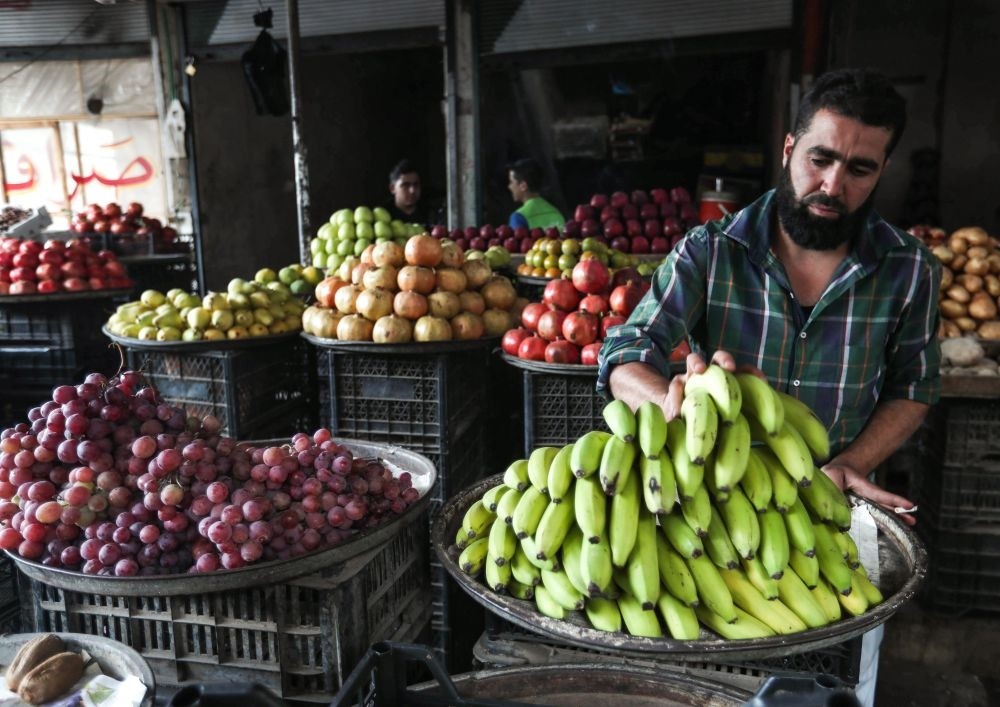 A Syrian fruit merchant organizes bananas outside his shop in the opposition-held town of Maaret al-Numan, just south of Idlib province, Sept. 27.
by daily sabah
Oct 05, 2018 12:00 am

The Sochi deal continues to prove to be a success in Idlib, thanks to the mutual efforts of Turkey and Russia. Praising these efforts, the Russian president said that the two countries are working in solidarity and will soon achieve their goals

Following the Sochi deal signed between Turkey and Russia to set up a demilitarized zone in Syria's last remaining opposition bastion of Idlib, Russian President Vladimir Putin said on Wednesday that the country is working in solidarity with its Turkish partners for the protection of the cease-fire in the province's non-conflict zone.

"We see that Turkey is approaching the agreement with great gravity, fulfilling their obligations to ensure that several radical groups and heavy weapons from the stress reduction zone are withdrawn," Putin said at a press conference in St. Petersburg.

Stressing that the Sochi agreement is a "very good" deal to provide reconciliation in Idlib, Putin said that the deal prevented further bloodshed in the region and the sides are actively working on fulfilling it.

Ankara and Moscow have agreed to create a demilitarized buffer zone in mid-September in Idlib. Under the deal, the demilitarized zone is a 15-20 square kilometer area to separate Bashar Assad regime troops and the Syrian opposition in Idlib.

"I have every reason to believe that we will achieve our goals, and that means, no large-scale military actions will occur there [in Idlib]," Putin said, referring to the effectiveness of the efforts exerted to establish a demilitarized zone in Idlib.

The zone will be monitored by the two countries' armed forces via coordinated patrols.

According to the Sochi agreement, Turkey has scaled up efforts to eliminate radical groups from the region. It also works to facilitate the humanitarian situation in the province. Regarding these efforts, Presidential Spokesman İbrahim Kalın highlighted yesterday at an event in Istanbul the need to work with the constitutional committee in Syria, stressing that other international actors also should take responsibility, "as Turkey cannot shoulder this burden alone."

German Foreign Minister Heiko Maas described the Sochi agreement as "major step," announcing that the Berlin government is ready to provide humanitarian assistance to Idlib. "The deal is a preventative development against usage of chemical weapons by Bashar Assad's forces," he said during his visit to the United States earlier this week.

Maas also said German army won't participate in a retaliatory military operation against the regime if it uses chemical weapons. The U.S had called on Germany in

mid-September to take part in a retaliatory offensive if the Assad regime uses chemicals against civilians in Idlib.

Germany has participated in efforts to find a permanent solution to seven-year-long Syrian civil war via diplomatic channels. During his three-day visit to Germany last week, Erdoğan announced that the leaders of Turkey, Russia, Germany and France would convene in mid-October in Istanbul to seek solution for the crisis in the war-torn country.

The summit will be a parallel process to reinforce the Astana process, which was held by three guarantor states to the conflict, Turkey, Russia and Iran, to establish a de-escalation process in Syria between the internationally recognized opposition and regime forces. The devastating Syrian civil war began in 2011 when Bashar Assad took severe measures against demonstrators calling for change due to widespread corruption, economic recession, unemployment and poverty throughout the country.