Adviser of the Russian Federation Vladimir Shamakhov: Turkey, Russia have always been a link for East and West 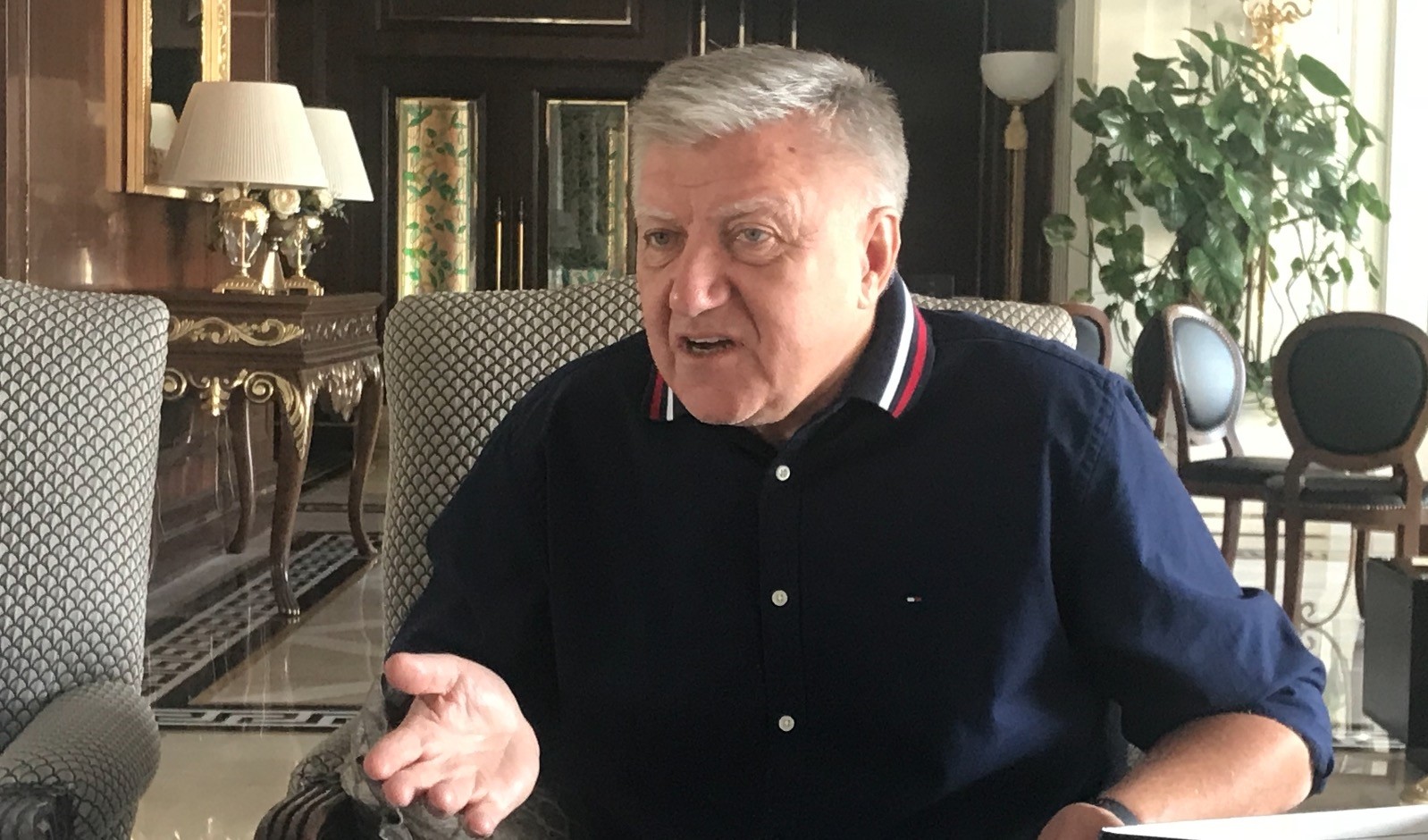 Regarding the Syrian crises, Vladimir Shmakov indicated that the firm cooperation between Russia and Turkey has proven the strategic alignment that enabled demilitarization in Syriau2019s Idlib, referring to recent Sochi deal between the two countries.
by Nur Özkan Erbay
Oct 08, 2018 12:00 am

Speaking on bilateral ties between Turkey and Russia, Vladimir Shamakhov said that these ties are fundamental for the operation of multilateral relationships in the world due to the geographical locations of the two countries at the crossing and unifying point between different regions

Dr. Vladimir Shamakhov, the director of the North-West Institute of the Russian Presidential Academy of National Economy and Public Administration (RANEPA) and the First Class Acting Adviser of the Russian Federation answered Daily Sabah's questions on the current state of relations with Turkey.

During his visit to Turkey, Shamakhov gave comments on regional and international issues, including Syria and the global economy that both countries are actively involved in and affected by.

Talking about Turkish-Russian relations, he said the two countries are currently "high and good" and steps to further develop these ties are being taken and the diverse levels of association in the past. 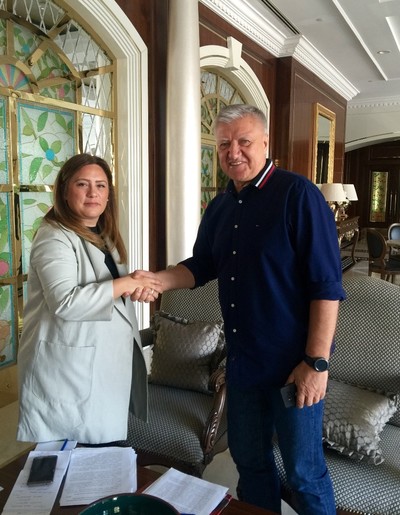 Deeming the relations between the respective countries' academics, scientists, businesspeople and politicians as one of the building blocks of the connection in global politics, Shamakhov said, "It seems to me that the official relationship, the maximum, depends on the relationship of the citizens or between communities and between societies."

Shamakhov indicated that countries make reasons to enrich their relations with each other by taking the current state of the world and conjunctures into consideration.

Signifying that the formation or reformation of agreements and the global system as a whole is constantly evolving, Shamakhov said that the unipolar world has transformed into a bipolar and even multipolar system. He asserted that when talking about the critical relationship between East and West or between Atlantic and Asia, Russia and Turkey are always in the middle, constituting a junction for both of the spheres.

Regarding the Syrian crises, Shamakhov said that the issue is of great importance and that the resolution requires a solid coalition. In this respect, he stressed that firm cooperation between Russia and Turkey has proven the strategic alignment in this matter.

"If we can speak about the situation connected to Syria, it can be said that the situation is very important, significant. In solving or facing the crisis in Syria, a solid coalition between Russia and Turkey proved that our countries are oriented in a strategic way. In favor of reaching consensus, we are ready to overcome as a part of national interests and the strategic cooperation can be made with the algorithm of the model, prototype of the relationship. A new model, a new base or a new approach for the global construction is happening" Shamakhov commented.

Answering a question of whether the Turkish-Russian agreement over Idlib would inspire or reflect long-waited solutions in Syria, Shamakhov said, "Yes, I am absolutely sure about it. It seems to me that it is a historical moment, and as I said before the prototype is found for the regional and local conflicts when taking into consideration of the all participants and even including some border countries."

The West doesn't want to acknowledge others' opinions

Commenting on Euro-Russian relations, Shamakhov affirmed that they are not at war and that there is peace between them despite not being friends. He also underscored that there is a lack of multilateral understanding between Russia and the Western world and that the West does not want to acknowledge alternative outlooks and opinions.

"The Western world does not want to understand the other's opinion. The one pole model of the world is just one opinion and view, and if someone has another point of view, they cannot be taken into consideration in that model," Shamakhov said.

Pointing out the recent developments in Idlib, he claimed the West in the Syrian crisis imposed that one polar model in general. Shamakhov asserted that the Western world seemingly acted like a kind benefactor and even enforced democracy.

However, according to Shamakhov, due to diminishing legislative power, the new model of relations has paved the way to a previously unseen approach: A resolution to the conflict through peaceful means.

"We can sure find the will to solve this situation through peaceful means. It means that this new, realistic approach can be a basis for constructive negotiations between the West and Russia," he said, while signifying that this could also be a prototype for other regional and local conflicts.

US presence in Syria is illegitimate

Commenting on the presence of the U.S., Russia and other countries in Syria, Shamakhov said that Russia's stance is clear on the issue.

"Through the U.N. or other international organizations along with the invitation of the state in question, another state can be involved in a situation in the said country," he asserted.

"Concerning the question, the position of Russia is clear, and it was clear. Russian Federation President Putin approved it many times. It means that do you like, or do not you like how a state is functioning, or how the state acts in political, religious arenas, you cannot count a state by its arms. By the decision of the United Nations General Assembly, by the invitation of the officially recognized country, it does not mean the U.S. and other countries they are the official legislative mandate. So, it means even if it is the U.S. or Kazakhstan for example, which is a very friendly country towards Russia, there is no legislative norms that give states permission to do that entrance," Shamakhov said.

He also stressed that being against a country's political or religious administration does not justify interference and intervention.

"If other countries don't have this kind of invitation, they should seek the support of or permission from the said international organizations. The U.S. doesn't have such a permit," he continued.

Answering the question of whether the U.S. presence in Syria is illegitimate, Shamakhov said, "Yes. Either the U.N. or other international organizations, or by the invitation of state, a state can involve itself in a situation in another country. Because nobody recognizes Syria as a legitimate country, it means that a county can do it with the invitation letter of its leader or recognized by internationally organizations. The Russian military presence in Syria acts by the official invitation letter approved by Syria and the Syrian leader. If other countries do not have such an invitation letter, they should ask for the support or permission of world organizations. There is no such permission for the U.S."

Touching on recent statements by President Recep Tayyip Erdoğan, Shamakhov reiterated that after a final agreement with President Putin on Syria, Russian and Turkish military forces would withdraw from the country. He urged other countries to do so as well.

"As the president of the Turkish Republic, Erdoğan said recently that the Russian leader, Putin, after the establishment of the agreement about Syria, Russian and Turkish military forces are ready to get out of Syria. The other countries should also act in this way," Shamakhov said.

Meanwhile, questions regarding Turkey's security concerns and U.S. support to terrorist groups like the People's Protection Units (YPG)/PKK and its affiliates, especially in northern Syria, which Shamakhov asserted that no country has the right to influence the activities of a sovereign power or its officials without receiving proper approval.

"I don't consider myself as the right person to evaluate that question. There is no such interest of Russia. But in an abstract way, without receiving their approval, no country has a right to influence the activities of the official power, or official authorities in another state. So, the national security of Turkey is an issue of the Turkish Republic, or the other countries that received the approval of Turkey. It is not an issue of U.S. or China, or the other countries" he remarked.

US hegemony is not absolute anymore

Regarding relations between Russia and the U.S., Shamakhov asserted that seeking convergence on all issues and questions will not allow the establishment of a union. In this respect, according to Shamakhov, Russia and the U.S. will try to reach a consensus even if they don't agree on every single issue. Meanwhile, he asserted that the U.S. always attempts to impose its views and opinions on the rest of the world, believing that everyone should agree with its perspective:

"The position of the U.S. is that they believe everybody should agree with their views and opinions. Sanctions towards Iran show us that the world, including Europe, is annoyed with this kind of stance. The nuclear issue shows that the hegemony of the U.S. is not absolute. This is also a proof of a new way, a new model," he said.

Shamakhov also claimed that the hegemony of the U.S. is over and that there will be a new model that will take interests of other countries into consideration.

US dollar has been transformed into dangerous tool

Talking on the U.S. economic hegemony, Shamakhov asserted that it could be broken but not swiftly. He stated that the U.S. dollar has transformed into a dangerous tool.

"It is possible that the response cannot be served in a fast way. However, there is no such necessity now to move forward in a fast way. The economy of the U.S. based on the dollar, which is turned as a danger of strength. In Syria situation, this danger of strength is opposed to the consolidation of Russia, Turkey and Iran. So, it shows that, the demonstration or the danger, there is no possibility to base economy on that force, on that strength. The dollar might face difficulties at anytime. There will be a necessity to form, reserve the currency, or there is a need to balance the global economy," he elaborated.

Turkey, China and Russia could create a new economic model

Regarding the hardships of the Turkish economy, Shamakhov said that there would be certain difficulties as the U.S. is trying to preserve the current economic model with countries like Russia, China and Turkey.

Nevertheless, he said that the aforementioned countries could overcome these challenges by facing them together.

"I am sure that we can face these difficulties by supporting and helping each other. We can help the world to create a new stable economy that is has multidimensional orientation," he added.

He said that the U.S.' current attitude in economy does not mean the country is evil and that any other country in the U.S.' place would act in a similar manner.

"This does not mean that U.S. is bad. But it means that on the place of U.S., all the other countries will act like that. It could be Turkey, it could be Russia, and they could act in that way. Because every monopoly in the historical process acted like that but it shows also that sometime every monopoly and every empire lose their power, and now we are in that period. The U.S. is sliding from being the global monopoly; it is a normal historical process and it will reflect to politics, economics and various other areas," he said.

"Right now the current balance is not very sustainable. We can see that there is one column that can make the balance move from one side to the other but the balance should become more sustainable and more based on the earth," he concluded.