UN envoy: Turkey one of the world's top countries for humanitarian aid 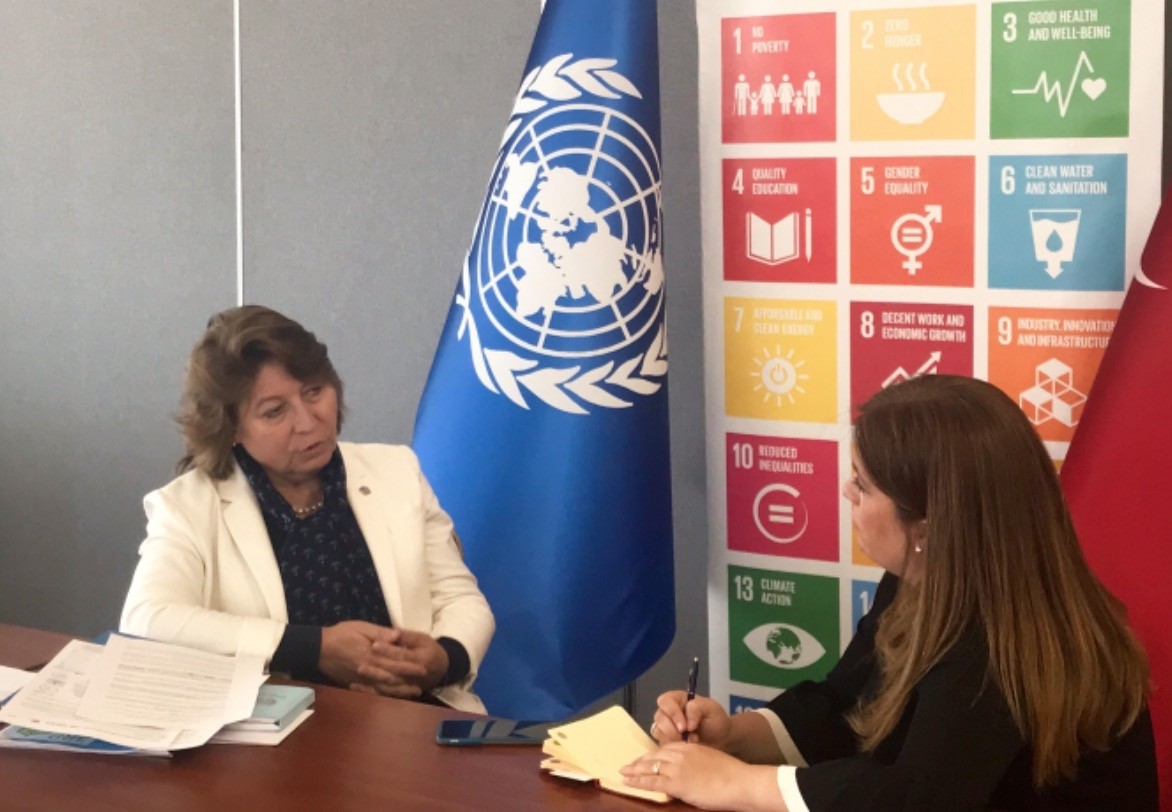 The United Nations Resident Coordinator and UNDP Resident Representative in Turkey Irena Vojackova-Sollorano said Turkeyu2019s humanitarian support to Bangladesh, Yemen and Syria has put it among the ranks of the top countries for humanitarian aid.
by Nur Özkan Erbay
Oct 15, 2018 12:00 am

Turkey has been a leading and exemplary global actor in humanitarian efforts with nearly $8.1 billion spent, UNDP representative in Turkey Irena Vojackova-Sollorano said

Turkey hosts more than 3 million Syrian refugees and has spent approximately $30 billion on the displaced people since the beginning of the Syrian civil war.

Turkey was also the most charitable nation in 2017 with nearly $8.1 billion spent in humanitarian aid, an independent international development organization said. Almost 30 percent of all international humanitarian aid, $27.3 billion, came from Turkey, according to the Development Initiative's (DI) Global Humanitarian Assistance Report. The U.S., Germany and the U.K. followed Turkey with $6.68 billion, $2.98 billion and $2.52 billion.

The United Nations Resident Coordinator and UNDP Resident Representative in Turkey Irena Vojackova-Sollorano answered Daily Sabah's questions regarding the primary activities of the U.N. related to Syrian refugees in Turkey, and the steps to be taken. Turkey is one of the biggest advocates for the U.N., Sollorano asserted that Turkey is one of the top countries which spends a lot on humanitarian issues globally.

Sollorano stressed that as they are now celebrating the 73rd year of the U.N., the organization has been providing a venue for states to negotiate and accordingly it has become a platform where states can solve humanity's problems.

Commenting on a question about how politics and strained relations between the countries affect the functioning of the U.N., she said that no matter if politics affect their job if there is suffering then the U.N. steps in to provide assistance to individuals.As the world agenda is dominated by the devastating Syrian war which began in 2011, an ongoing conflict that created significant challenges for humanitarian work in recent history because of the widespread forced migration, economic recession, unemployment and poverty.

"Many people have fled, nobody wants to get killed, this is very basic and this is what applies to all people from all around the world and Syria," Sollorano said but she added that U.N. has been exerting efforts to provide an atmosphere to states to communicate, to respect each other and to stop wars.

Whether she foresees further challenges in the region, she cited the U.N.'s initiatives to gather countries in the means of finding diplomatic solutions for war-torn Syria and she called on the international community to act responsibly.

However, "all wars are man-made disasters. This is up to men to stop. There is nothing the U.N. can do here, the governments should do it on their own but the U.N. can call to action to solve and provide assistance to individuals, Turkey, in that sense, has really taken the stand," she added.

Following the anti-regime protests that began in Syria, a mass flow of refugees reached Turkey in a few months to escape the bloody civil war. Therefore, Turkey opened its doors to refugees and now hosts some 3.5 million Syrian people.

"Forced displacement is a result of wars, people then have to flee. The movement around the world is increasing and ignoring is the worst scenario, we advocate all governments to have a migration, emigration and immigration policy," Sollorano said.

Nevertheless, about a question on what the U.N. counteracts when states do not want to accept people fleeing from a war, Sollorano said the U.N.'s stance is against it by saying that U.N., in that sense, negotiates with such governments to find a solution, and that every country has the responsibility to act.

Stating that by taking care of refugees Turkey has been an exemplary country in the world, she added that the U.N. is working with all countries, and with Turkey, they have spent over a billion in humanitarian issues a year. The donors to the U.N., in humanitarian issues, are mostly European countries, she said. "It is the responsibility of the global community to help each other. Turkey assisting other countries, other countries also assists Turkey. It is like give and take. With mutual respect, we can achieve collaboration" Sollorano said.

Apart from Turkey's support to Syrian refugees, concerning the humanitarian crisis happening in Bangladesh, Yemen, and Syria again, Sollorano said that Turkey has ranked as one of the top countries for humanitarian aid spending among countries.

Commenting on Turkey's open border policy for Syrian refugees, Sollorano expressed appreciation toward Turkey by saying "The assistance Turkey is providing to the other countries is very important and we are commenting on that. We wish in the future the relations between Turkey and U.N. will get closer."

In relation, Sollorano stressed that the joint work conducted by the U.N. and Turkey is based on a five-year agreement where the U.N. exists in Turkey to support the government in terms of providing education, employment, health, protection and any related issue to further advocate the well-being of Syrian refugees.

Reiterating that the situation in Turkey is special because of the large refugee population here, Sollorano underscored the strong collaboration with the U.N. and Turkey, by saying that "the cooperation with the government and U.N. is actually very close; especially in the refugee situation we have achieved what we have embarked on."

In that regard, commenting on Turkey's and the U.N.'s stance in the Syrian crisis, Sollorano indicated that due to the close work with the government, "The work that has been done in there as well."

Concerning the intense efforts of the government and the U.N.'s support, Sollorano also stated that many Syrian health professionals have been trained and the employment opportunity was provided to them and in turn, they work for the well-being of the families and refugee community.

Similarly, Sollorano stressed that U.N. has been cooperating with the government in terms of providing social assistance to the refugees, in that sense she affirmed that 1.3 million Syrian refugees have received the ESSN card [a social support card] on a monthly basis, and they [U.N.] support them on the ground and work with all municipalities to support the government's efforts to assist refugees.

"The efforts that we have made do not only go to the refugees but also it goes to the communities that are hosting the refugees because it is the schools, hospitals that take care of everybody. In that sense, we are building up vocational training facilities, and there are more Syrian refugees receiving education in such facilities, Turkish young people can also get training and can work in there" she explained.

TURKEY ONE OF BIGGEST PROMOTERS OF U.N.

Sollorano also stated that the U.N. is working in Turkey in support of the National Development Program, which is mainly focused on the advancement of society in Turkey in terms of social, economic and employment issues. Highlighting that every society needs support, she indicated that they have to discuss with the government where to draw the lines and where the government wants to involve them in.

On the U.N.'s future goals in the next five years in Turkey, Sollorano said that the government and the U.N. will come together next year to discuss the issue and to decide on what to do next.

Underscoring that working with the U.N. is beneficial to decrease the inequalities in society, to increase the well-being of individuals and to carry out sustainable development goals which indeed cover all spheres of life including quality education, decent work and economic growth.

Sollorano asserted that Turkey is one of the biggest promoters of the 17 goals declared by the U.N. in 2015 to achieve a better future for people.