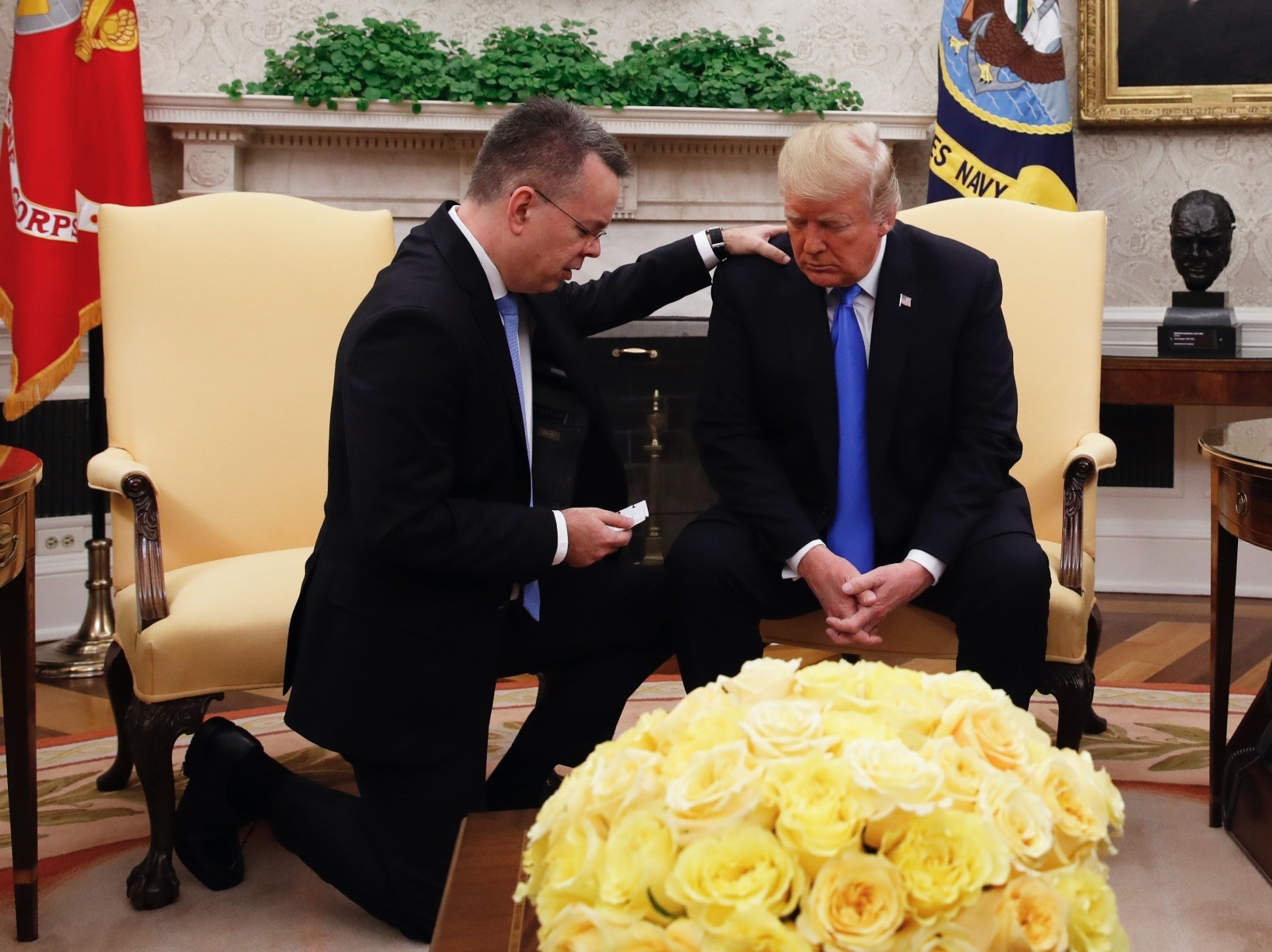 Trump has signaled that relations with Turkey may get better with pastor Brunson now in the U.S. Yet, Ankara's concerns over Washington's support for the YPG and its lack of support against FETÖ will likely linger, with already strained ties remaining unsolved

U.S. President Donald Trump said over the weekend that the release of American pastor Andrew Brunson from house arrest was a big step toward normalizing the strained ties with Turkey and that relations could soon be restored. However, for Turkey, the Brunson case was deemed only as a judicial process, rather than a diplomatic matter as Trump has portrayed it. Two major disagreements for Ankara, namely the extradition of Fetullah Gülen, the U.S.-based leader of the Gülenist Terror Group (FETÖ) and U.S. military support given to the PKK's Syrian affiliate, linger as significant obstacles in normalizing ties between the two NATO allies.

"This is a tremendous step toward having the kind of relationship with Turkey, which can be a great relationship that I know we are going to have," Trump said at the White House, welcoming pastor Brunson, who was found guilty on espionage-related charges and sentenced to three years and five months in prison on Friday, yet released from house arrest for time already served.

"We feel much differently about Turkey today than we did yesterday. And I think we have a chance of really becoming much closer to Turkey and maybe having a very, very good relationship," Trump also added. Prior to Trump receiving Brunson at the Oval Office in the White House, the U.S. president had also sent tweets, thanking Erdoğan regarding the case. "It will be wonderful to see and meet him. He is a great Christian who has been through such a tough experience. I would like to thank President @RT_Erdogan for his help!" Trump tweeted.

In a response to Trump's tweet, Erdoğan also sent a tweet on Saturday, saying the release of Brunson was a ruling made by the independent Turkish judiciary. Erdoğan also underlined in the tweet of Turkey's demand from the U.S. over cooperation against the PKK, Daesh and FETÖ terrorist groups.

In what some pundits called Twitter-diplomacy, the exchange of messages by the presidents has been interpreted as positive, yet it does not seem to be enough to normalize relations between the two allies, historically considered as "strategic partners," in the Middle East region and within the NATO establishment.

Although Ankara-Washington ties had reached a historic low over the Brunson case and the U.S. had recently taken some economic steps against Turkey, the main area of dispute in relations is filled with disagreements over two groups Ankara considers as terrorist groups: FETÖ and the PKK's Syrian affiliate, the People's Protection Units (YPG).

Gülen, who is the mastermind of FETÖ, has been living in the U.S. since 1999 on self-imposed exile. A large number of leading FETÖ operatives are also believed to be living in the U.S., some of who fled Turkey after the failed July 15, 2016 coup attempt, during which 251 people were killed and more than 2,200 were injured.

Ankara has demanded the extradition of FETÖ from U.S. authorities and submitted boxes of evidence suggesting Gülen's direct role in the failed coup, yet a substantial result has not yet been achieved. Turkish officials have accused U.S. authorities for handling the matter with political motivations, rather than treating it as a legal case, despite the extradition agreement between the two countries.

FETÖ, a shady cult, which the Turkish government says has infiltrated state institutions for the past 40 years with the aim of taking over the state, is seen as an existential threat to the country. Sheltering the FETÖ leader and leading operatives of the group in the U.S. is thus seen as contradictory to "strategic partnership" and alliance by Ankara.

Pastor Brunson, an evangelical Presbyterian clergyman who lived in Turkey for about two decades, was also found guilty of links with FETÖ and the PKK. Brunson was initially detained in October 2016 and later put under house arrest due to health reasons in July. On Friday he was found guilty of espionage related crimes, yet he was released for time served under house arrest and his travel ban was lifted.

The U.S.' military and political support for the YPG has been another stumbling block in overcoming the strained ties between Ankara and Washington. For the Turkish government, the U.S. support of the YPG, which functions as the dominant actor under umbrella group Syrian Democratic Forces (SDF), is simply supporting the PKK, a group listed by the U.S., the EU and Turkey as a terrorist organization.

The PKK functions under different names in Turkey's southern neighbors, including Syria, Iraq and Iran. Turkey says any support given to the group poses a national security threat to Turkey and its sovereignty, as well as the territorial integrity of the states where the PKK receives support. Due to the organizational structure, the PKK and the YPG are being operated through the same channels, and ultimately support given to one group is easily transferred to the other when deemed necessary by the group. Turkey has fallen victim to attacks by terrorists who were trained in YPG camps in Syria.

The ultimate aim of the terrorist group YPG, Ankara says, is to establish an autonomous region in northern Syria, and that due to its organic links with the PKK, such as the establishment of what has been described as a "terror corridor" will not be tolerated. The support given to YPG in Syria is also seen as a direct threat to the territorial integrity of Syria. The group's human rights violations have also been documented by international rights groups as well as the United Nations.

Turkey, on Jan 20, launched Operation Olive Branch in YPG-held northwestern Afrin province to block the YPG from reaching its aim of establishing an autonomous region. Yet, with the U.S. support, large parts of northern Syria still remain under control of the YPG, causing distress between Ankara and Washington. Recently a deal was reached over Manbij, northern Syria, to withdraw YPG control from the region, yet so far the foreseen calendar has not been met and Ankara accuses U.S. officials of delaying the process.

NO DEAL MADE ON BRUNSON

Meanwhile, both presidents underlined that there was no secret deal for Brunson to be released, contrary to media reports suggesting an agreement was reached over the pastor.

"There was absolutely no deal made," Trump told reporters on Saturday.

Erdoğan had long argued that the courts will make the decision and that he cannot interfere in the work of the judiciary to meet demands made by Washington. "I am not in a position to intervene in the judicial process as Turkey is a country of rule of law. I am the president of the Republic of Turkey, which is a democratic republic. I have to abide by whatever the courts decide," Erdoğan had said last week on Oct. 11.

Officials from the Trump administration had repeatedly called for the pastor's release and imposed economic sanctions on two Turkish ministers and also doubled tariffs on steel and aluminum imports from Turkey. Washington's moves has negatively affected the dollar/lira parity, bringing the Turkish lira to historic lows against the U.S. dollar.

"Despite these impositions and threats" over the case, "none of the Republic of Turkey's institutions" including the presidency took any action on the case of Andrew Brunson due to pressure, Ömer Celik, the ruling Justice and Development Party (AK Party) spokesman, told reporters on Saturday in the southern province of Adana. "At this stage, the judicial process has been completed," Çelik added.

The two major causes of friction between Turkey and the U.S. - the S-400 missile deal between Ankara and Moscow and the imprisonment of Mehmet Hakan Atilla, the former deputy CEO of Turkey's state-run lender Halkbank who was arrested in March last year while on a business trip in the U.S. - are expected to remain as issues between the two NATO allies.

Turkey reached a deal with Russia to purchase S-400s, Russia's most advanced long-range anti-aircraft missile system, for $2.5 billion last December. With the move, Turkey is set to become the first NATO member country to acquire the system. NATO has said Turkey is free to make its national choices on defense, yet Washington has disagreed, saying Ankara's deal with Moscow is not in line with the NATO alliance.

Turkey's interest in the Russian systems started due to Washington's indifferent attitude on technology transfer in the case of a possible purchase of the American-made Raytheon Patriot missiles.

Equipping itself with S-400s, Ankara says it will boost its air defense capabilities amid threats from PKK and Daesh terrorists at home and conflicts across its borders in Syria and Iraq. The deployment of the S-400s could risk the security of some U.S.-made weapons and other technology used by Turkey, including the F-35s.

In addition to the S-400, the imprisonment of Mehmet Hakan Atilla is also a disagreement between Ankara and Washington.

The Turkish banker was found guilty of helping Iran evade U.S. sanctions and sentenced to 32 months in prison in May.

Ankara says Atilla is not guilty and that evidence against him was fabricated and also provided to the U.S. through FETÖ-linked figures.

President Recep Tayyip Erdoğan had told Bloomberg at the time that Atilla was "definitely innocent," and added, "If Hakan Atilla is going to be declared a criminal, that would be almost equivalent to declaring the Turkish Republic a criminal."