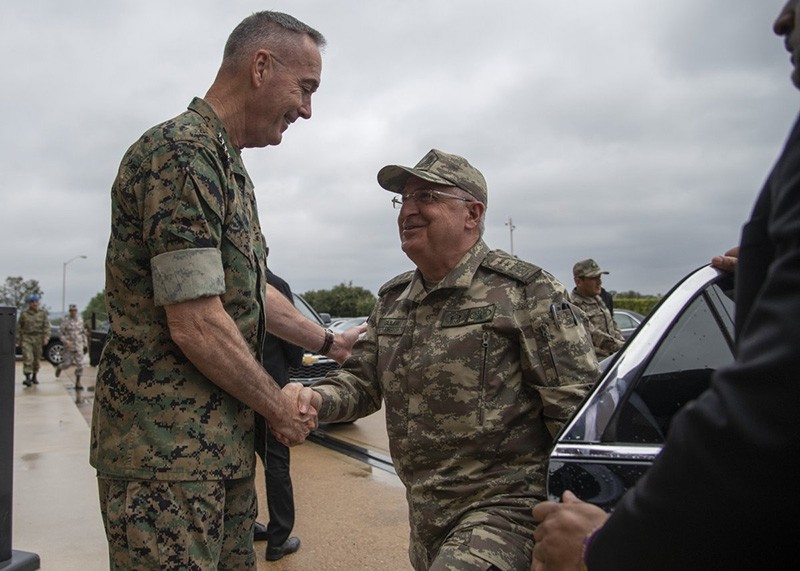 Chief of Staff Gen. Yaşar Güler and his U.S. counterpart Gen. Joseph Dunford discussed regional security and the fight against terrorism in Washington late Monday, according to presidential sources.

"The two commanders continued their talks on security and stability in Manbij and, at the same time, discussed the importance of Turkish-American cooperation in the fight against terrorism in order to ensure a lasting defeat of Daesh," U.S. Joint Staff Spokesman Col. Patrick Ryder said after the meeting.

At the beginning of the month, Turkish and U.S. forces began training for joint patrols in the northern Syrian city of Manbij in line with a deal focusing on the withdrawal of the PKK-affiliated Peoples Protection Units (YPG) terror group from the city in order to stabilize the region.

Turkey had long been warning the U.S. against what Turkish officials have described as a "reckless attitude in northern Syria's Manbij" and its arms support to the YPG. Turkey repeatedly stressed that supporting terror groups with arms would eventually create serious security threats.

Relations with the U.S were heading for a rupture before the two sides reached an agreement that focuses on the withdrawal of terrorist YPG/PKK forces from the city to stabilize the region.

The YPG is the dominant group in the U.S.-backed Syrian Democratic Forces (SDF), which controls almost all the territory east of the river comprising some one-third of the territory of Syria, except for the Assad regime-controlled area near Deir ez-Zour and the Daesh-held area near the Iraqi border. The SDF also controls the districts of Manbij and Tabqah on the right bank of the river.