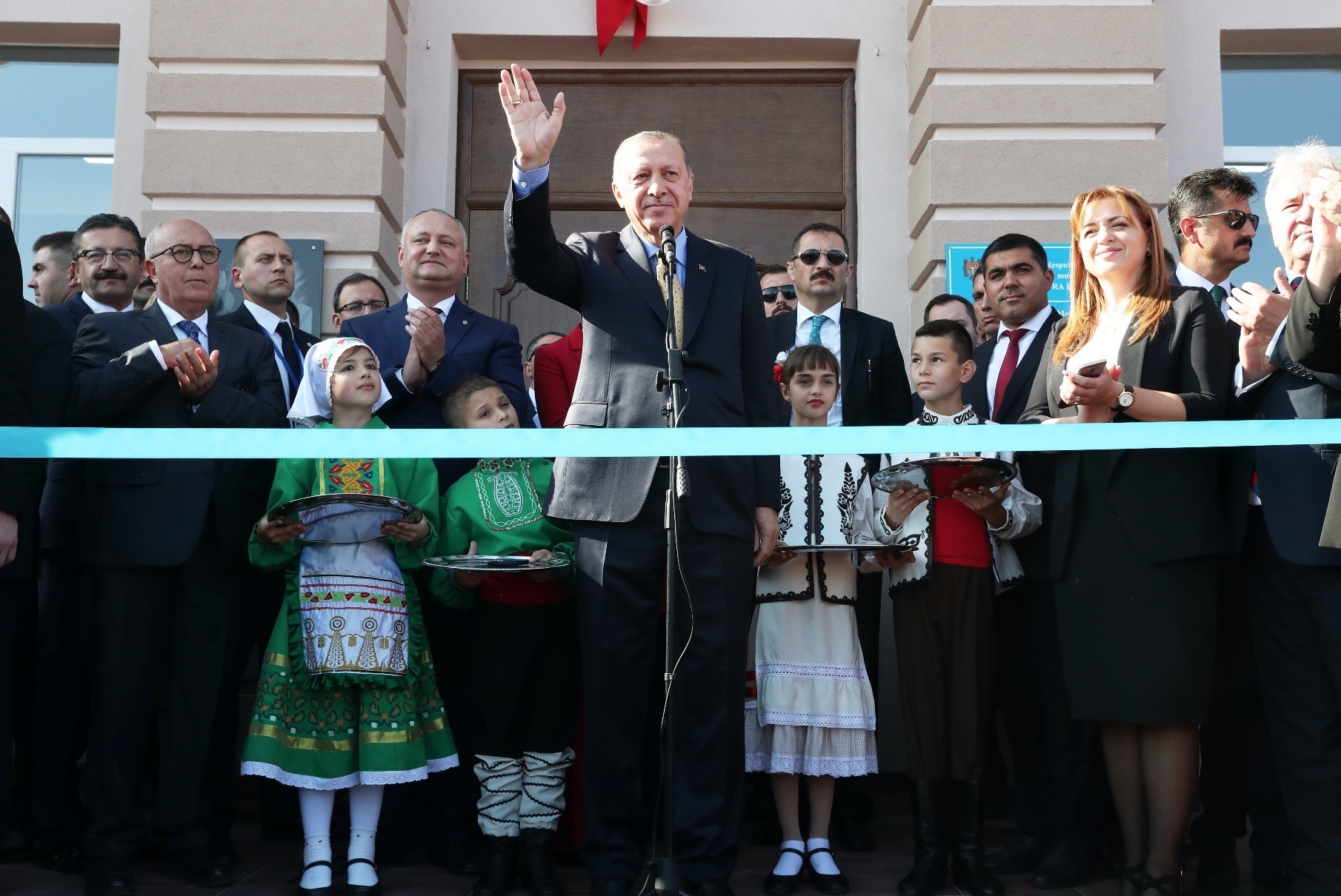 On the second day of his visit to Moldova, President Erdoğan met with Gagauz Turks and emphasized Turkey's continued support for the region

President Recep Tayyip Erdoğan visited the Gagauz autonomous region yesterday as part of his official visit to Moldova and highlighted the importance of historical and cultural ties between Turkish and Gagauz people.

Erdoğan arrived in Moldova on Wednesday for a two-day visit aimed at boosting political and trade ties with the former Soviet republic. As a part of the visit, he visited Comrat, the capital of the Gagauz autonomous region in southern Moldova, where he was welcomed with great enthusiasm, to attend the inauguration ceremony of a Culture House built with the contribution of Altındağ municipality of Turkey's Ankara province.

Following the inauguration ceremony, Erdoğan said that although there is no physical border with Moldova, Turkey sees the country as one of its neighbors.

"We will continue to be a friend of Moldova and the Gagauz Turks in their bad times [and good times]," said Erdoğan, adding that Turkey will also continue to support the Gagauz people to live at the highest standards in their own homeland.

"We are taking steps to open a great education complex in Comrat next year, the project is about to be finished," said Erdoğan, while heralding that a Turkish Consulate is also being planned in the region.Following the opening ceremony, during which Gagauz folk dances took place, Erdoğan also had a joint press talk with Moldavian President Igor Dodon and the Governor of the Gagauz Autonomous Republic, Irina Vlah.

Emphasizing that Moldova's territorial integrity is of "crucial importance" for Turkey, Erdoğan said that he reached an agreement with his Moldavian counterpart to take "tangible" measures for proper implementation of Gagauz autonomy.

In December 1994, Moldova's parliament offered some 160,000 Turkic Gagauz people, within their borders, a large degree of autonomy in order to create a favorable environment for maintaining a national identity and culture.

Dodon, on the other hand, expressed his contentment with the visit, saying that Turkey had a major contribution in reaching stability in Moldova.

Saying that there have been some serious problems and there are still some issues that are waiting to be solved regarding the Gagauz region, Dodon said that despite all these issues, the two societies [Moldavians and Gagauz people] have continued to live together in a friendly manner for centuries. He also acknowledged Turkey's support for the Gagauz people in solving problematic issues, thanking Erdoğan for his personal contributions.

Vlah also acknowledged Turkey's efforts in the region, saying that Turkey has been supporting the Gagauz region in many aspects through various projects.

On Wednesday, Erdoğan met Dodon for talks at the presidential building, which was reopened for the occasion. Turkey funded repairs for the building after it was ransacked in 2009 by demonstrators protesting elections, saying they were rigged by the then communist government. Speaking at a news conference after his meeting with Dodon, Erdoğan said the two countries will work to boost economic ties.During the meeting, Dodon said the relations between the two countries go back 26 years with more than 60 agreements signed in this time.