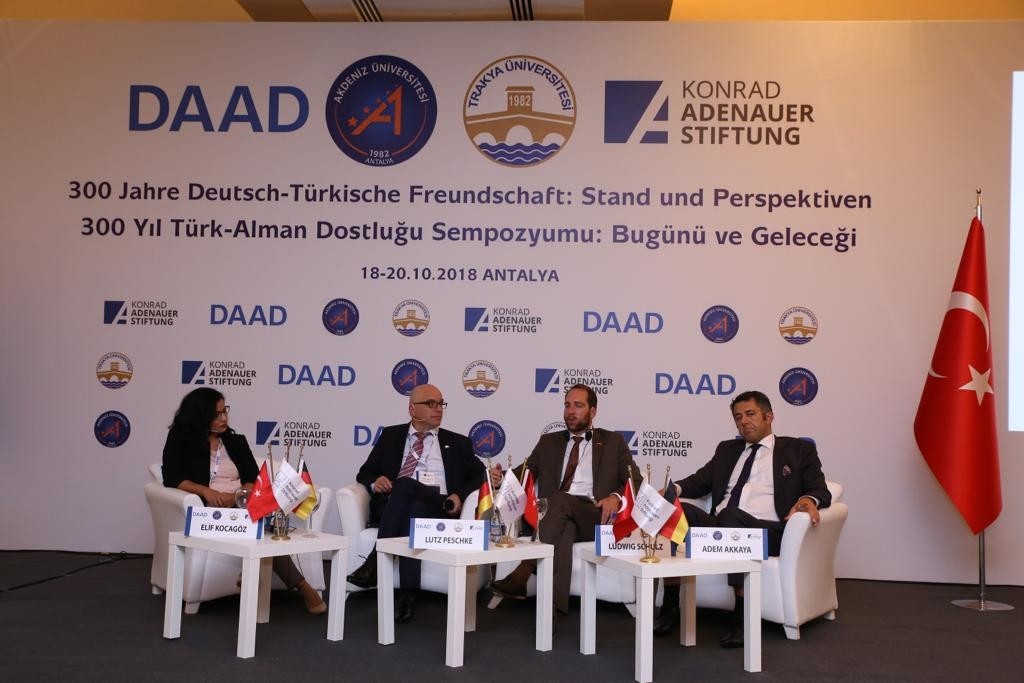 Huge potential continues to exist in economic relations between Turkey and Germany with the recent recovery in political ties, experts said

Economic relations between Ankara and Berlin have remained on course despite strained political relations between the two, and they now have even more potential to get back on track as diplomatic ties steadily improve.

After a one-and-half-year hiatus due to political tension in Turkish-German ties, the two countries have recently focused on efforts to recover and further enhance political and economic relations with mutual visits and supportive remarks.

Speaking at the event "300 years of German-Turkish friendship: Current Situation and Perspectives," on Thursday, Ludwig Schulz, the head of the Turkey Desk at the German Near and Middle East Association (NUMOV), said that the economic relations between the countries are based on interdependencies and that a huge potential exists in various fields.

"In terms of economy, we should not only talk about cooperation between companies, but also we need to focus on more joint initiatives in scientific cooperation, robotics, digitization and even higher education," Schulz said.

Stressing that the focus leans toward sustainability under the new conditions of global competition, Schulz said bilateral trade between Turkey and Germany has been gradually increasing, even though it is progressing somewhat in favor of Berlin. "Sustainability is very crucial. Development of bilateral relations, both between EU and Turkey as well as Berlin and Ankara, also holds a significant place in the future of the ties," he added. Germany is the top destination for Turkish exports, making it Turkey's biggest trading partner.

According to data compiled by the Turkish Statistical Institute (TurkStat), bilateral trade between Turkey and Germany in 2016 totaled $35 billion. Turkey's exports to Germany amounted to $13.9 billion, while imports were $21.4 billion. Bilateral trade between the countries increased, reaching $36.4 billion in 2017. Last year, Turkish exports to Germany rose to $15.1 billion and imports from Germany fell slightly to $21.3 billion.

Between January and August this year, Turkey's exports to Germany rose to $10.4 billion, a 9 percent increase compared to the same period last year.

Turkish-German relations have been in a normalization process for some time after the two countries were locked in heated debates and delivered each other ultimatums for one-and-a-half years over a series of issues, including the presence of the PKK and the Gülenist Terror Group (FETÖ) in Germany. Last month, President Recep Tayyip Erdoğan paid a visit to Germany, which was the first state visit from Turkey after a seven-year hiatus, raising fresh hopes that the two countries will keep up dialogue to focus on mending past disagreements.

Ankara's relations with Berlin have been strained initially by PKK demonstrations and the presence of the terrorist organization's senior leaders in the country, which Ankara labels as showing tolerance to terrorism.

The Turkish government also blames the German state for harboring, aiding and abetting FETÖ. So far, hundreds of high-ranking Gülenists and fugitive putschists were granted asylum by German authorities.

Relations have warmed in recent months, however, as several issues of mutual interest pushed the two countries closer together.

Elif Kocagöz, an academic at Sütçü İmam University, said large German companies continue to invest in Turkey without hesitation by ignoring speculation on its economic situation due to their experience on risk management; however, small and medium-sized enterprises are hesitant to invest in Turkey. "Maybe one-on-one diplomacy should be carried out for these smaller enterprises by major Turkish trade organizations such as TÜSİAD [Turkish Industrialists and Businessmen's Association]," she said.

From 2002 to April 2018, direct investments from Germany to Turkey amounted to $9.2 billion. This figure was $2.2 billion from Turkey to Germany in the same period.

Also, about 80,000 Turkish-German businesses operate in Germany with an annual turnover of approximately 52 billion euros ($59.6 billion), while employing almost 500,000 people in 50 different sectors.

Additionally, according to Trade Ministry data, 7,227 German firms operated in Turkey as of the end of April, and Germany tops the list of companies with foreign capital in Turkey. Kocagöz added that even though the number of German tourists had decreased in the last two years for several reasons, including travel warnings from the German government, the figure will likely increase soon, as well as the number of exchange students between the two countries. More than 3.5 million German tourists visited Turkey in 2017, while the number was about 5.5 million in 2015, an all-time high. According to the latest figures, the number is expected to reach about 5 million by the end of this year.