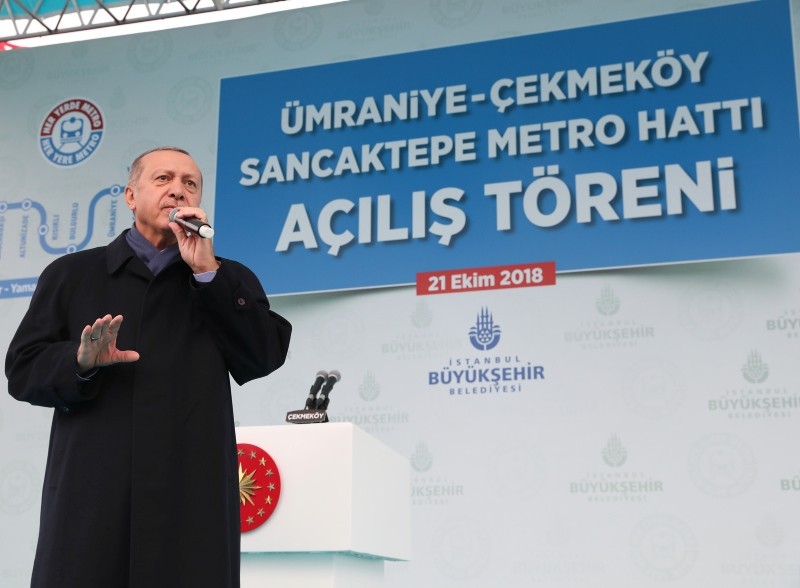 President Recep Tayyip Erdoğan said Sunday that he will make important statements on Tuesday at the ruling Justice and Development Party's (AK Party) parliamentary group meeting regarding the investigation on journalist Jamal Khashoggi's fate, who was admittedly killed by Saudi authorities.

"We seek justice and this will be revealed in all its naked truth, not through some ordinary steps but in all its naked truth. This is not an ordinary case. I will make statements on Tuesday at the AK Party parliamentary group meeting. The incident will be revealed entirely," said Erdoğan at a ceremony in Istanbul's Çekmeköy district to inaugurate the second phase of the Üsküdar - Çekmeköy metro line.

His comments are likely to heighten speculation that Turkey may be about to reveal some of the results of its investigations into the killing of the dissident journalist, a Washington Post columnist and U.S. resident, who disappeared after entering the Saudi consulate in Istanbul on Oct. 2.

On Saturday, after weeks of denying any involvement in Khashoggi's disappearance, Saudi Arabia said the 59-year-old died in a fistfight at the consulate. The crisis has shaken Western confidence in the world's top oil exporter and its de facto ruler, Crown Prince Mohammed bin Salman.

Turkish newspapers have released information detailing a 15-member team that purportedly arrived in Istanbul to confront Khashoggi at the consulate.

"Why did these 15 people come here (to Istanbul), why were 18 people arrested (in Saudi Arabia)? These need to be explained in detail," Erdoğan said.

Saudi Arabia's public prosecutor on Saturday said 18 people were arrested in connection with the incident.

Turkish sources say the authorities have an audio recording purportedly documenting Khashoggi's murder inside the consulate.

"If the incident transpired as it has been told across the world, there is no way Saudi officials can cover this up by saying a team from Saudi Arabia came and two or three men among them murdered him," Numan Kurtulmuş, deputy chairman of the AK Party, told broadcaster CNN Türk in an interview.

"A crime committed in a consulate cannot be carried out without the knowledge of the senior state officials of that country. If this crime was really carried out as has been said, if the evidence really leads to that conclusion, the situation will be dire and this must have very serious legal consequences."

Reflecting the intensifying international skepticism over its account, a senior Saudi government official has laid out a new version that in key respects contradicts previous explanations.

The latest account includes details on how the team of 15 Saudi nationals sent to confront Khashoggi had threatened him with being drugged and kidnapped and then killed him in a chokehold when he resisted. A member of the team then dressed in Khashoggi's clothes to make it appear as if he had left the consulate.