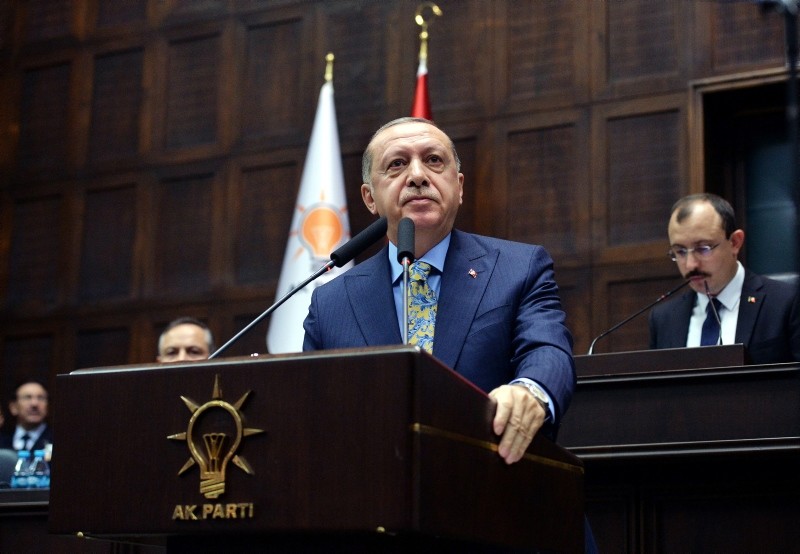 Erdoğan confirmed that a 15-man Saudi team took part in the incident. "A Saudi team of three people landed in Istanbul one day before Khashoggi's killing and visited forests in Istanbul and Yalova," he said, adding that two other teams arrived at the consulate separately.

"Saudi consulate cameras were removed and all footage was deleted from hard drives. Camera footage shows Khashoggi did not leave the consulate," Erdoğan said. "This is a political murder," he added.

"Saudi Arabia denied the incident on Oct. 4. The consul general invited a Reuters reporter to the consulate, opening a few cupboards and claiming nothing happened."

Erdoğan said that he told the Saudi delegation dispatched for the investigation and King Salman that Consul General Mohammad al-Otaibi was negligent and incompetent. He was later recalled to Riyadh and was relieved of his duties.

"The murder took place inside the Saudi consulate but it should not be forgotten that it took place on Turkish soil. The Vienna convention does not allow the investigation of such murders to be prevented by diplomatic immunity," Erdoğan said, saying that he also expects the convention to be reviewed after this incident.

"Evidence shows Khashoggi's killing was a result of a planned operation. Why was the team assembled in Istanbul? Who gave the instruction for them to assemble? Why wasn't the consulate open to the investigation until many days later? Why were conflicting statements made? Where is the body of a person who was admittedly murdered? We need answers," he said.

He demanded Saudi Arabia reveal the identity of the "local cooperator" who purportedly took the body.

"I call on Saudi Arabia's government to permit Khashoggi killing suspects to be tried in Istanbul," Erdoğan added.

"My demand is that 18 people be tried in Istanbul," he said, adding that "all those who played a role in the murder" had to face punishment.

"To blame such an incident on a handful of security and intelligence members would not satisfy us or the international community," Erdoğan said.

"Saudi Arabia has taken an important step by admitting the murder. As of now we expect of them to openly bring to light those responsible — from the highest ranked to the lowest — and to bring them to justice," the Turkish president said.

Erdoğan expressed confidence that Saudi King Salman is cooperating with the investigation, saying he does not doubt the king's sincerity.

Later in the day, Erdoğan called the family of Khashoggi to convey his condolences and sorrow over his death, saying that Turkey will follow up on the incident and will do everything to shed light on the murder.

Khashoggi, a columnist for The Washington Post, went missing after entering the Saudi Consulate in Istanbul on Oct. 2.

After denying knowledge of Khashoggi's whereabouts for two weeks, Saudi Arabia on Saturday said he was killed during a fight inside its Istanbul consulate.

His body has not been recovered, nor has Saudi Arabia explained its shifting narrative on what transpired.

Bahçeli says criminals in Khashoggi murder should be tried in Turkey

The Nationalist Movement Party (MHP) Chairman Devlet Bahçeli also Tuesday said that the criminals involved in Khashoggi's case should be tried in Turkey.

"The scene of the crime is in Turkey, so the scene of judgment will also be in Turkey," said Bahçeli at his party's parliamentary group meeting.

"It is compulsory that the plans of the murderers and instigators on Turkey be clarified, as well as their regional and global networks," he added.