Germany, France to take active role in Syria peace talks as US sidelined 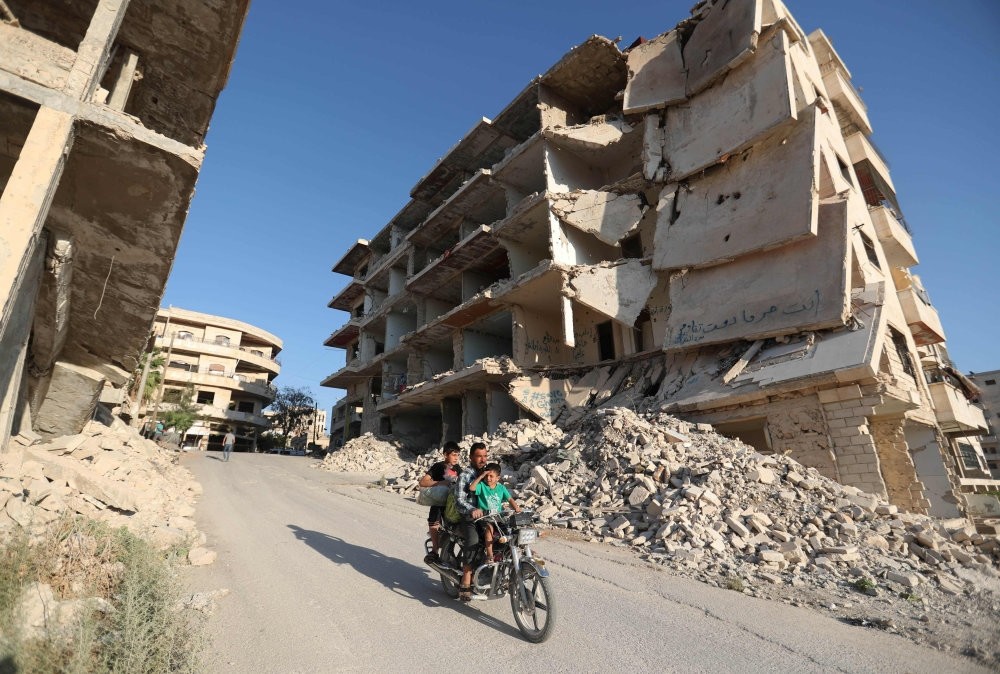 With the participation of Turkish, German, French and Russian leaders, the quartet summit on Syria is set to begin in Istanbul on Saturday. The exclusion of the U.S. and the inclusion of two major EU powers makes the summit unique from previous high-level meetings on Syria

Ankara is getting ready for the quartet Istanbul summit on Syria over the weekend that will see the participation of German, French and Russian leaders in the absence of the United States, which has been sidelined by making what could only be called a series of missteps in its Syria policies. The participation of two main European Union countries in the summit is considered significant for both Turkey and Russia, who are major regional actors, for different reasons, experts have argued. Kemal İnat, an academic from Sakarya University stated that the participation of Germany and France in the summit is important for both Turkey and Russia.

He said that "Ankara favors the presence of EU countries in order to balance the Russian and Iranian sides in the Syrian process and also expects cooperation on the refugee crisis."

The participation of Germany and France, countries that had not actively engaged in previous efforts for the resolution of the Syrian crisis, has raised more interest in the summit, while the U.S. has been left out of the summit.

Ankara has been highly vocal in its criticism of the U.S., which has opted for cooperating with terror groups in Syria that pose great security threats to Turkey. According to the officials in Ankara, the U.S.' insistence on this has proved that it has no intention in contributing to restoring peace.

"Turkey aims to involve countries that can contribute to peace efforts in the process. This way it would not be left facing Russia alone," İnat said and added that in the beginning of the Syrian conflict there were two blocs; one supporting the opposition including Turkey and the other one supporting the Bashar Assad regime.

"However, the Western actors who were expected to stand with Turkey, left it alone, which led to increasing negotiations between Russia, Iran and Turkey since 2016. There has been substantial progress in these talks," İnat underlined. Ankara stresses that the Bashar Assad regime lost its legitimacy long ago while Russian and Iran continue support for the regime. Yury Barmin, an expert on Russia, stressed "I think the summit is taking place at a crucial time in the Syrian conflict. Russia managed to demonstrate to the European powers that it is committed to a ceasefire in Idlib, which was an important indicator to the EU. Arguably without the Russia-Turkey deal for Idlib the summit would not have happened."

In the Istanbul summit that will be hosted by President Recep Tayyip Erdoğan; Russian President Vladimir Putin, German Chancellor Angela Merkel and French President Emmanuel Macron are expected to be present.

The Sochi deal over Syria's northwestern province of Idlib reached by Turkey and Russia, a political process and the ending of the conflict to restore peace will be discussed during the meeting.

Alev Kılıç, director of the Center for Eurasian Studies (AVİM) said "as Turkey and Russia reached an agreement over Idlib, the talks in the Istanbul summit would enhance a joint understanding of the deal."

Turkey and Russia reached the Sochi agreement on Sept. 17 and it was believed to have prevented a humanitarian disaster.

Previously the Assad regime was planning to launch a full scale operation on Syria's Idlib, the last stronghold of the opposition. The agreement focuses on the withdrawal of heavy weapons and radicals from the demilitarized buffer zone.

Stressing that Russia-Turkey cooperation really depends on what happens next in Idlib, Barmin stated that "Moscow has commended Ankara for how the demilitarized zone was established in Idlib but this was a low-hanging fruit to grab. Turkey's ability and willingness to show progress on ridding the province of Hayat Tahrir al-Sham [HTS] is going to be the most important deliverable."

Meanwhile, Defense Minister Hulusi Akar said yesterday that he will discuss the Idlib issue with his Russian counterpart Sergei Shoigu during a meeting on Saturday, the same day as summit.

Kılıç also added that "Germany and France do not have direct interests on the ground like the U.S. They are mainly focused on the humanitarian aspect as they seek to prevent refugee waves." A high-level Western diplomat told Daily Sabah that "one of the Western countries also wanted to attend the summit, yet with an aim of avoiding too much isolation of Russia, only the participation of Germany and France was decided."

In relation to the common ground between Turkey and the EU participants, İnat added "We also share joint concerns with Germany and France regarding the issue of refugees. Previously in 2015, Germany had some serious concerns stemming from the refugee crisis. In the upcoming talks, the sides will look for ways to enhance cooperation to prevent a new refugee influx."

Turkey and the EU signed an agreement on March 18, 2016 to stem the inflow of refugees to Europe, which has been considered a significant example of cooperation between the two sides. Turkey has been the main route for refugees trying to cross into Europe since the beginning of the civil war in Syria. With the agreement, irregular arrivals decreased by around 99 percent, thus preventing the loss of many lives at sea.

Touching on Russia's perspective, İnat stressed, "Russia would always favor a platform where the U.S. is absent and Western countries like Germany and France are involved in the process," and added that this can be considered as "success" for Russia against the U.S.

Commenting on the EU's stance toward Russia, Barmin added "Realistically speaking it is only the first in a series of steps to build trust with the Europeans in order to have them commit to some sort of reconstruction in Syria. The EU however could commit to stabilization and wider humanitarian efforts in Idlib if the area proves stable."

The absence of the U.S. in the summit is no surprise since it has been showing little interest in the process of the peace efforts. More importantly, the U.S.' support to the PKK's Syrian affiliate, the People's Protection Units (YPG), has opened deep wounds in Turkish-U.S. ties that have yet to heal.