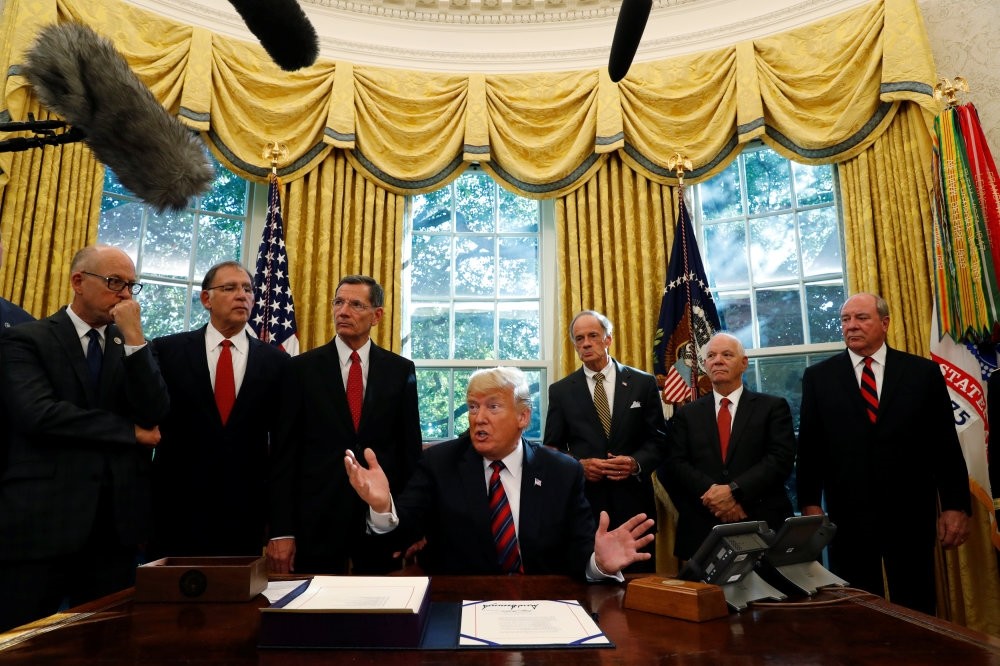 U.S. President Donald Trump talks to reporters about the killing of journalist Jamal Khashoggi in Turkey during a bill signing ceremony at the White House in Washington, Oct. 23.
by Daily Sabah Oct 25, 2018 12:00 am

The international community continues to condemn the inconsistency in explanations and Saudi attempts to cover up the killing of journalist Jamal Khashoggi in Istanbul on Oct. 2; he was highly critical of Riyadh's policies

In the wake of recent emerging evidence on the murder of the dissident journalist Jamal Khashoggi, global outrage and protests against Riyadh continue to grow apace as several governments called for more concrete answers, signaling new sanctions to be imposed on those responsible for the killing.

U.S. President Donald Trump slammed Saudi Arabia on Tuesday for its handling of the death of Khashoggi by saying to reporters that "The cover-up was the worst in the history of cover-ups."

In his interview with The Wall Street Journal on Tuesday, Trump underscored for the first time that Saudi Crown Prince Mohammed bin Salman (MBS) may have been involved in the case and added that "Well, the prince is running things over there more so at this stage. He's running things and so if anybody were going to be, it would be him."

In relation to the likely sanctions, Trump pointed out that he will leave the consequences for Saudi Arabia up to Congress in consultation with him.

Shortly after, Secretary of State Mike Pompeo announced that 21 Saudis involved in the killing "including those in the intelligence services, the Royal Court, the foreign ministry and other Saudi ministries" will face sanctions. Pompeo said that the State Department has begun "revoking visas," of those individuals and is examining the "applicability of the global Magnitsky sanctions" which targets the people responsible for human rights violations or corruption. Pompeo also highlighted that with new "real data," the visa revocations will be not the "last word" on the matter, signaling new sanctions to come.

Pompeo said in an internal email sent widely to U.S. State Department employees that Washington wants perfect clarity on exactly what happened in the death of Khashoggi. "We are already seeing steps from Saudi Arabia reflecting serious accountability, but we won't be satisfied until we get perfect clarity on exactly what transpired," Pompeo said in a "Miles with Mike" email sent on Tuesday evening and reviewed by Reuters yesterday.

Meanwhile, Iran's President Hassan Rouhani accused Washington of supporting Riyadh in the killing of Khashoggi. Rouhani described Khashoggi's murder as "organized," saying the Saudis would not have dared to "commit the crime without American support." Rouhani also urged the Turkish government to continue to carry out an impartial investigation into the matter.

The United Kingdom's Prime Minister Theresa May said yesterday in her Parliament meeting that she condemned the murder in "the strongest terms" and any Saudis named in relation to Khashoggi's gruesome death will be banned from entry to the U.K. and any U.K. visas they hold will be revoked. May also added that she will confront Saudi Arabia's King Salman on the matter when she speaks to him later.

'Davos in the desert' boycotted by international community

The conference was supposed to feature 150 high-profile speakers from 140 firms, yet, 40 participants including the chief executives of JPMorgan, Siemens, and IMF head Christine Lagarde pulled out from the conference in protest of the allegations that the country premeditated the killing. In addition to the firms, several media outlets including Bloomberg, CNN and the Financial Times also halted their support for the FII.

Khashoggi, a columnist for The Washington Post, had gone missing since entering the Saudi Consulate in Istanbul to obtain documents related to marriage on Oct. 2. He was living in the U.S. on self-imposed exile amid fears for his safety after he became increasingly critical of the Saudi government.

Several governments including ministers from France, Australia, New Zealand, and the Netherlands refused to send their representatives to the conference. The U.K. also announced Tuesday that no U.K. officials will attend the conference except the U.K.'s ambassador to Saudi Arabia, Simon Paul Collins.

The U.S. also announced that U.S. Treasury Secretary Steven Mnuchin will not take part in the conference yet will visit the country for a different meeting.

In response to the call of German Chancellor Angela Merkel on EU countries to sanction Saudi Arabia earlier this week, foreign ministers of the G7 countries and the EU condemned the killing of the journalist on Tuesday and voices to raise sanctions within the countries mounted.

The joint statement from the foreign ministers of Canada, France, Germany, Italy, Japan, the U.K., the U.S., and the high representative of the European Union said they condemned "in the strongest possible terms the killing of Khashoggi, which the Kingdom of Saudi Arabia has confirmed took place in its consulate in Istanbul."

France government spokesman Benjamin Griveaux said yesterday that France will wait for taking appropriate measures until Riyadh's involvement in the killing of Khashoggi is clearly established.

The EU foreign policy chief Federica Mogherini also said on Tuesday that the Union's reaction to the killing of Khashoggi will depend on the next steps that will be taken by the Saudi authorities.

Commenting on the matter, the EU Council president Donald Tusk underlined on Wednesday that the killing of Khashoggi is "a horrible crime" and added that even the slightest trace of hypocrisy would bring shame on us. The only European interest is to reveal all details, regardless of who is behind it," referring to conflicting statements by Riyadh on the matter.

The German government also said yesterday that Saudi Arabia's explanation on the Khashoggi murder is by no means sufficient. Speaking at a news conference in Berlin, government spokesman Steffen Seibert reiterated Germany's expectation from Saudi Arabia for a credible, transparent and thorough investigation. 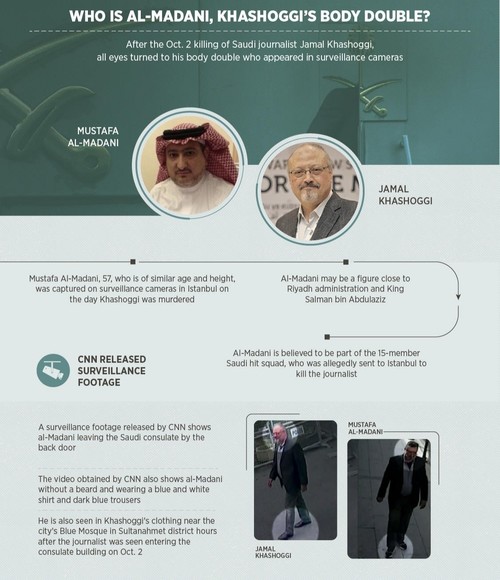 In the face of Erdoğan's statement suggesting that murder of the journalist was premeditated and mounting global outrage against Riyadh, Saudi officials acknowledged that he was targeted and a body double used for the cover-up, confirming images of a body double circulating in the media.

Speaking to The Associated Press on the condition of anonymity, Saudi officials confirmed that they sent a team to Turkey that included a forensics expert and a member whose job was to dress in the 59-year-old writer's clothes and pretend to be him, yet, they maintained that Khashoggi's death was an accident when the team tried to take the journalist back to the kingdom.

Officials added that after Khashoggi would have brought back to the kingdom, the plan was for the forensic expert to wipe clean evidence that Khashoggi had been in the consulate and for the body double to leave the facility to give the false impression that Khashoggi had left on his own. However, the operation turned violent and the journalist was killed in an accident.

Speaking during his ruling Justice and Development Party's (AK Party) group meeting in Parliament on Tuesday President Recep Tayyip Erdoğan labeled the killing of Khashoggi as a "political murder," by saying that evidence shows Khashoggi's killing was a result of a meticulously planned operation.

Riyadh has been issuing conflicting statements on the matter and continues to claim that Khashoggi was killed in a fistfight despite the overwhelming evidence of efforts of a cover-up.

Evidence obtained yesterday revealed that the Saudi teams, in consulate vehicles, scouted out Istanbul's Belgrad Forest ahead of the killing and where the body of the journalist is suspected to be dumped.

Anadolu Agency (AA) reported yesterday that Saudi officials refused to let Turkish police examine a well in the garden of the kingdom's consulate in Istanbul when the police sought to search it. However, following the report, Saudi authorities yesterday granted the Turkish police permission to inspect the well.

Saudi Arabia had denied the murder of Khashoggi on Oct. 4, claiming the journalist had left the consulate, while failing to provide proof that Khashoggi had left. Following the offer by MBS to search the consulate building, Turkish forensic investigators entered the consulate on Oct. 15. After days of denying any knowledge of his whereabouts, Saudi Arabia on Saturday claimed Khashoggi died during a brawl inside the consulate. The kingdom's announcement that Khashoggi died in a "fistfight" was met with international skepticism and allegations of a cover-up to absolve the 33-year-old crown prince of direct responsibility.

UN willing to help in investigation

The United Nations said Tuesday it would investigate the case of missing Khashoggi if Turkey makes such a request, in response to Foreign Minister Mevlüt Çavuşoğlu's remarks, which had suggested that Ankara would cooperate with any independent investigation by the U.N. or international courts and institutions on the murder.