Turkey determined to prevent cover up of Jamal Khashoggi murder 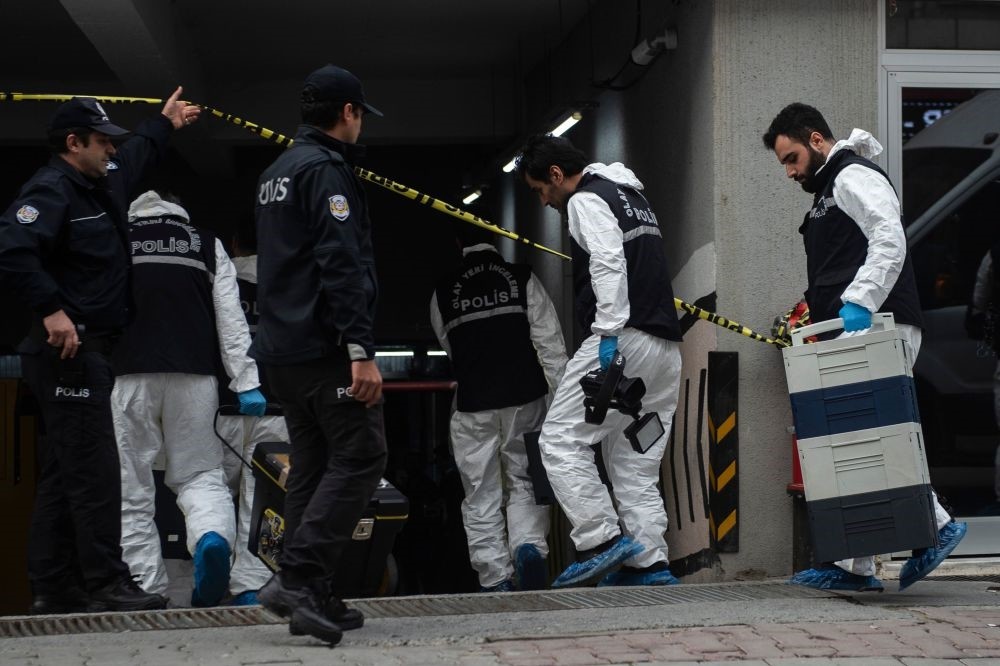 Forensic police officers stand at an underground car park cordoned off by Turkish police after they found an abandoned car belonging to the Saudi Consulate on Oct. 23.
by Daily Sabah Oct 25, 2018 12:00 am

Turkey will not allow those responsible for the killing of Saudi journalist Jamal Khashoggi to evade justice, President Recep Tayyip Erdoğan said yesterday, while investigations by the Turkish police into the murder case continue

All necessary investigations will be carried out to unravel the unknowns in the killing of Saudi journalist Jamal Khashoggi, President Recep Tayyip Erdoğan said yesterday, adding that all new pieces of evidence will be shared with related parties as they emerge. "As a country, we are determined not to allow the cover-up of the murder. We will share new findings with related parties as we reach them," Erdoğan said during a meeting in Ankara, referring to Khashoggi's murder on Oct. 2, which he described on Tuesday as "savage" and labeled it as a "political murder." "We are resolute to not let those responsible, from those who ordered it to those who executed the murder, to escape justice," he added.

Erdoğan and Saudi Crown Prince Mohammad Bin Salman (MBS) held a phone conversation, requested by the Saudi side, where Khashoggi was discussed in detail, Turkish presidential sources said yesterday. Sources added that Erdoğan and MBS expressed willingness to cooperate on bringing the unknown factors in the Khashoggi murder to light. The 59-year-old Khashoggi, known for his critical views on the policies of MBS, was a Washington Post columnist. He had entered the Saudi Consulate in Istanbul on Oct. 2 to obtain marriage-related documents, yet he never came out. Khashoggi's fiancee had reported his disappearance to the authorities and an investigation was launched.

While initially Saudi authorities denied murder claims, later they confirmed Khashoggi had died during a brawl after he entered the consulate, a claim which U.S. President Donald Trump later called the "worst cover-up ever."

On Oct. 6, Turkey launched a formal investigation into Khashoggi's disappearance. Since then, a chain of investigations at the consulate, consul general's residence, some suspected areas in Istanbul and two vehicle's belonging to the consulate have taken place by both Turkish and Saudi teams.

"We have put forward an effort to shed light on the incident with evidence without accusing anyone," Erdoğan said, while also responding to criticism on Turkey, saying that the information on the case has not been shared with the public immediately. The president said the case is a "unique incident for both diplomatic and international relations" and that Turkey has been handling the matter with utmost seriousness and sensitivity. He added that there is a legal and an international law aspect to the incident and that all findings are shared with a sense of responsibility. Later on at the Future Investment Initiative (FII) conference organized by Riyadh, MBS said Saudi Arabia was in coordination with Turkey "to reach results," and added that attempts to damage Riyadh's relations with Ankara "will not yield any results under the leadership of King Salman and Erdoğan." MBS described the murder of Khashoggi as a "heinous crime."

On Tuesday, Erdoğan had shared a chronological timeline of the incidents leading to Khashoggi's murder and events taking place in the aftermath. He refrained from directly accusing anyone, yet he called on the Saudi officials to extradite 18 suspects detained by Riyadh for involvement in Khashoggi's murder. "However, some are bothered by our sharing [of the information]. They ask 'where were you for three days, for five days' [after the incident]? They ask these kinds of questions. Why? They don't have any weight on their shoulders, nor any responsibility," Erdoğan said, adding that all steps are being taken carefully. The president said Turkey's sensitivity on the matter is not just appreciated by Khashoggi's family but also by the international community.

During his Tuesday speech in Parliament which was followed closely by the international media, Erdoğan said the murder of Khashoggi was "premeditated," and that Turkey has strong evidence to back its claim. The president had proposed during the speech that 18 Saudis involved in the incident, who are currently detained in Saudi Arabia, should be extradited to Istanbul to face trial. Erdoğan also put forward several questions that he said needed to be answered by Saudi Arabia to bring some clarity to the chain of events in Khashoggi's murder, including the motive behind the arrival of a 15 person Saudi team in Istanbul, believed to be involved in the killing of Khashoggi. "Why did these 15 people, all with links to the event, gather in Istanbul on the day of the murder?" Erdoğan asked.

The president further asked: "Who did these people get their orders from to go there?"

He pushed Saudi officials even further by asking for a clarification on denying the murder initially, which was later contradicted. CIA Director Gina Haspel visited the Turkish capital Ankara on Tuesday for talks with Turkish officials regarding the Khashoggi case. Sabah daily reported yesterday that audio and visual evidence at hand had also been shared with Haspel during the meetings at the Turkish National Intelligence Organization (MİT).