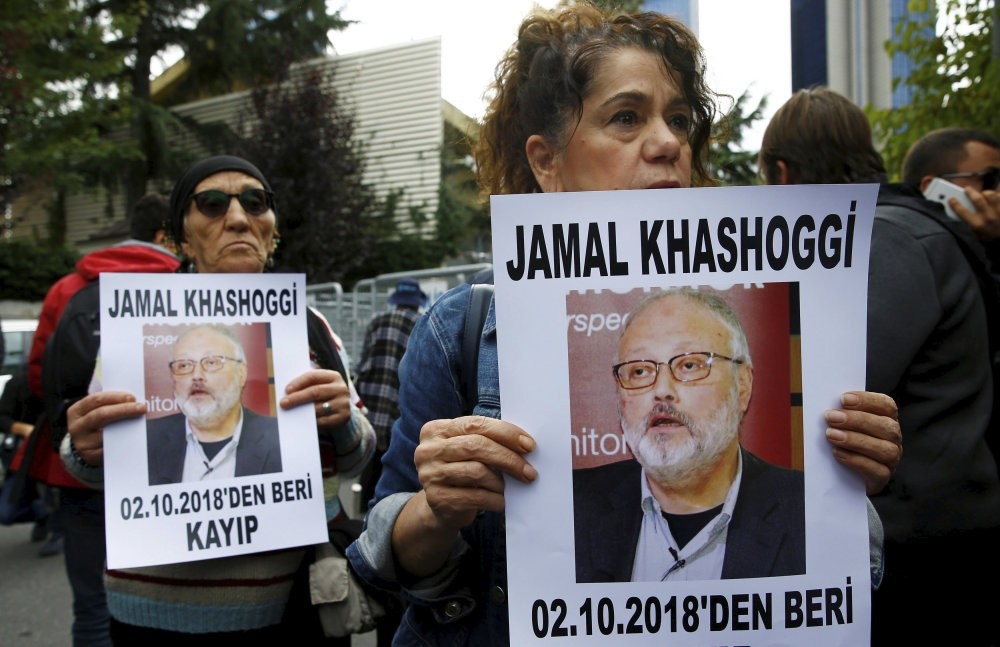 Human rights activists hold pictures of Khashoggi during a protest outside the Saudi Consulate in Istanbul, Oct. 9.
by Daily Sabah with Agencies Nov 03, 2018 12:00 am

Riyadh's reluctant attitude in revealing the truth about Saudi journalist Jamal Khashoggi's murder is raising concerns in the international community, with many urging the country to fully disclose the facts

It has been a month since the dissident journalist Jamal Khashoggi went missing after entering the Saudi Consulate in Istanbul. While the investigation continues with details slowly being uncovered by Turkish authorities and security forces, there are still many questions left unanswered. Blaming Saudi Arabia for trying to cover up the facts of the case, the international community has increased its pressure on the country to reveal the truth. Germany is still waiting for a transparent and credible investigation from Saudi Arabia into the murder of Khashoggi and is ready to take action in light of new findings, a German government spokesman said on Friday.

The spokesman, who asked not to be named, told Anadolu Agency (AA) that Germany was increasingly concerned over the case as many questions remained unanswered almost a month after Khashoggi's disappearance. "We are now following very closely whether Saudi Arabia is endeavoring to ensure transparency in the clarification of the case and to hold to account those responsible. In light of this development, we are ready to take appropriate action with our international partners," he said, referring to widespread calls for sanctions against Riyadh.

German Chancellor Angela Merkel previously said that Germany will no longer sell weapons to Saudi Arabia and called on the country to "ensure a swift, transparent and credible investigation" and hold those responsible to account.

Germany is not the only country to react against the actions of Saudi Arabia. On Wednesday, Istanbul's Public Prosecutor's Office released a statement, revealing that Saudi authorities are not willing to cooperate.

Khashoggi was strangled to death as soon as he entered the Saudi Arabian Istanbul Consulate and his body was dismembered and disposed of in accordance with plans drawn earlier, the Istanbul Chief Public Prosecutor's Office said on Wednesday. The announcement came as Saudi Arabia's top prosecutor, Saud al-Mojeb, on Wednesday completed inspections related to the killing of Khashoggi in Turkey.

The statement said that al-Mojeb and the accompanying delegation were asked where Khashoggi's body was, if there was any evidence reached by Saudi authorities on premeditated plans for the killing, and who the local accomplice mentioned by Saudi officials was.

The statement added that no concrete results were reached during meetings with the Saudi attorney general despite good intentions, and there was an obligation to reveal the Prosecutor's Office's findings on the investigation given the severity of the action. A report by Turkish daily Hürriyet also said the Saudi prosecutor had not shared any information, including the testimonies of the 18 people arrested, with Turkish authorities during his visit.

This uncooperative behavior of Saudi authorities were not very-well received by the international community. Apart from Germany, Norway summoned the Saudi ambassador over the murder of journalist Jamal Khashoggi, the Norwegian Foreign Minister said on Friday.

"We have raised the murder of Jamal Khashoggi and presented our point of view to the Saudi ambassador several times after it was known," Ine Eriksen Soreide said in a statement.

"We underlined how seriously we take this issue again yesterday, when he was at the Foreign Ministry for a discussion," she said.

Switzerland also decided to break a deal on repairing the spare parts of weapons with Saudi Arabia due to the Khashoggi case.

Meanwhile, the latest statement on the running of the investigation came from an adviser of the President Recep Tayyip Erdoğan on Friday.

Yasin Aktay, who was also a friend of Khashoggi, has said the team that killed Khashoggi in Istanbul cut up his body in order to dissolve it for easier disposal, the newspaper Hurriyet reported on Friday. He said that the corpse was disposed of by dismembering and dissolving it.

"According to the latest information we have, the reason they dismembered his body was to dissolve it easier," he said.

Khashoggi, a 59-year-old Washington Post contributor, was killed after entering the Saudi Consulate in Istanbul on Oct. 2 to obtain paperwork ahead of his upcoming wedding. His body has not yet been found. The case has brought near unprecedented international scrutiny on Saudi Arabia and its powerful Crown Prince Mohammed bin Salman, whom Khashoggi had criticized.

Apart from the states, journalists all around the world also raised their voice over the issue, calling for justice for Khashoggi. A group of journalists called on the Saudi government Thursday to reveal the truth behind the brutal murder. Gathering for a vigil in front of the Saudi Embassy in central London, members of the National Union of Journalists (NUJ) lit candles to remember their slain colleague.

Speaking to AA, NUJ general secretary Michelle Stanistreet said they demand justice for Khashoggi and an answer to what genuinely happened to him.

"What is clear is that he was brutally murdered for doing his job as a journalist," Stanistreet said. She underlined that tonight is the eve of the U.N.'s International Day to End Impunity for Crimes Against Journalists and said it is a campaign the NUJ is passionate about.

"Journalists around the world are being murdered every week for doing their job, and it is time that the world woke up to these dangers and held to account - whether it is governments or individuals or criminal forces - the people responsible for targeting and assassination of journalists," she added. Stanistreet said all governments should take seriously what happened to Khashoggi.

Meanwhile, at the request of Reporters without Borders (RSF), the Eiffel Tower's lights were turned off for a minute as a tribute to Khashoggi and all the other journalists in the world whose murders have so far gone unpunished. While the tower was blacked out, a minute of silence was observed by the secretary general of RSF Christophe Deloire, and all those gathered with him on Place de Varsovie, on the other bank of the River Seine.

"Jamal Khashoggi's barbaric murder shows that there are no longer any limits to the deliberate elimination of journalists," said Deloire and added, "A powerful gesture was needed to protest against this unbearable situation, and the one we chose was to extinguish the lights of one of the world's most emblematic monuments. By plunging the Eiffel Tower into blackness, the color of mourning, we pay tribute to our murdered colleagues, while the lights coming back on tell those who kill journalists that justice must sooner or later be rendered."

Despite all these pressures, the U.S. has still abstained from taking concrete action against the Saudi state. Secretary of State Mike Pompeo said on Thursday it would be a "handful more weeks" before the U.S. had enough evidence to impose sanctions in response to the killing of Khashoggi.

Pompeo, in an interview with KMOX radio in St. Louis, said President Donald Trump had made it clear Washington would respond to the killing. He said the administration is "reviewing putting sanctions on the individuals that we have been able to identify to date that ... were engaged in that murder."

"It'll take us probably a handful more weeks before we have enough evidence to actually put those sanctions in place, but I think we'll be able to get there," Pompeo said.

"We're going to find the fact pattern," he said. "The president said we will demand accountability for those who were involved in the commission of this heinous crime," he added.

While insisting the U.S. did not condone Khashoggi's killing, the top U.S. diplomat said the country had "deep and long-term strategic relationships" with Saudi Arabia and "we intend to make sure that those relationships remain intact."

Meanwhile, as these statements were coming in, the crown prince met with U.S. Christian evangelic leaders in Riyadh.

Apart from United States' attitude over the case, there are also states that would prefer to protect the Saudi state's position in the international area rather than prioritizing the truth.

Israeli Prime Minister Benjamin Netanyahu said on Friday the slaying of Saudi journalist was a horrendous act and "should be duly dealt with" in a way that doesn't undermine Saudi Arabia's stability. Netanyahu said at a news conference in Varna, Bulgaria that Iran is a bigger threat than Saudi Arabia and those who want to punish the Middle East kingdom need to bear that in mind.

He said, "A way must be found to achieve both goals because I think that the larger problem is Iran."