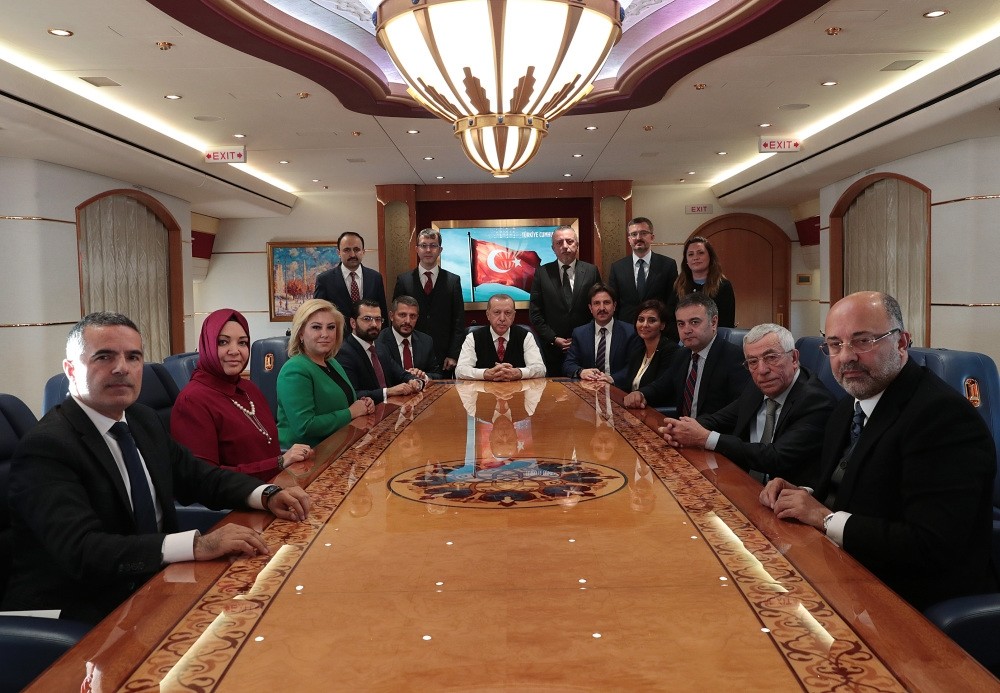 Speaking to journalists on his way back to Turkey, President Recep Tayyip Erdou011fan said he told several world leaders that the order for Khashoggi's murder was made by the high echelons of Saudi hierarchy.
by Nur Özkan Erbay Nov 13, 2018 12:00 am

Expressing that the recording of Khashoggi's murder has been shared with several countries, including the U.S., Germany and the U.K., Erdoğan underlined that Turkey is still patiently waiting for Saudis to shed light on the issue

The audio recording of the moments Saudi journalist Jamal Khashoggi was killed at the Saudi Consulate in Istanbul shocked a Saudi intelligence officer, President Recep Tayyip Erdoğan told journalists following his two-day official visit to France. The president made the remarks yesterday on his way back from Paris, where he attended Armistice Day ceremonies. He said that Turkey has not concealed any details on the murder from the international community and has given the recording to any related authority who has asked for it. "Even a Saudi intelligence officer was shocked after he listened to the recording and he uttered that 'only a person on heroin can commit such an action,'" Erdoğan said.

The president added that Turkey gave the recording to Saudi Arabia, the U.S., France, Canada, Germany and the U.K. He said they are patiently waiting for the Saudis to shed light on the issue "as promised by Saudi Crown Prince Mohammed bin Salman." Khashoggi, a columnist for The Washington Post was announced missing by his fiancee Hatice Cengiz after entering the Saudi Consulate in Istanbul to obtain marriage documents on Oct. 2. Later in October, the Istanbul Chief Public Prosecutor's Office announced that Khashoggi was strangled to death as soon as he entered the consulate and his body was then dismembered and disposed in a planned manner.

Erdoğan said that he discussed the Khashoggi murder with U.S. President Donald Trump, German Chancellor Angela Merkel and French President Emmanuel Macron in a dinner and told them it was obvious that Khashoggi's murder was ordered and instructed by the high echelons of the Saudi hierarchy.

"As I've mentioned in my article [in The Washington Post], I could not have such [accusatory] thoughts toward King Salman, whom I greatly respect, but we want that the person who gave the order to be revealed," he said.

The president added that he told Trump "there is no need to look elsewhere for the murderers since they are surely among the 18 people detained by Saudi authorities, including the 15-member team that came to Istanbul before Khashoggi's disappearance."

Erdoğan previously posed several questions to Riyadh on Khashoggi's murder, which he said needed to be answered.

"Where is Khashoggi's body? Who gave the order? The 18 people arrested know. Who sent the 15 people [the alleged hit squad involved in the murder] to Turkey? Saudi authorities must explain this," Erdoğan had asked.

US move on PKK aims to legitimize YPG, Erdoğan says

Erdoğan emphasized that Turkey regards Washington's decision to put a bounty on members of the PKK terrorist organization's leadership as a move to distinguish and legitimize the People's Protection Units (YPG) existence in Syria, adding that Ankara would not be persuaded with such strategy.

"The U.S. decision to offer bounty for three PKK members is a belated move. We perceive it as a sham to prove the claim of the PKK and Democratic Union Party (PYD)/YPG are different groups. Even the YPG rejected the U.S. with a statement, declaring that they have a united structure [with PKK]," Erdoğan said.

The U.S. authorized up to $12 million in rewards for information leading to the identification or location of three senior members of the PKK. The PKK has claimed the lives of more than 40,000 people over a 30-year terror campaign against the Turkish state. However, Ankara has cautiously approached the move, since Washington continues to back the YPG, the PKK's Syrian offshoot.

Erdoğan stressed that Turkey will intensify dialogue with the Iraqi central government as well as the U.S.-led coalition and the Kurdistan Regional Government (KRG) to eliminate PKK presence in northern Iraq.

"I hope we will solve this issue. Thus, we may regard the U.S.' action [on the PKK] in a different ground in Qandil," he said.

The president also said the international community has great responsibility for the decades-long campaign of PKK terror and reiterated Ankara's demand on the United Nations regarding the closure of the Makhmur camp, which is located 100 kilometers south of the KRG capital Irbil, due to security threats. Turkey has been asserting that the camp is used as a recruitment area by PKK terrorists.

Steps for solution on Halkbank case

Speaking on the Halkbank case, Erdoğan said that he discussed it with Trump and the U.S. president promised to solve the issue after his return to Washington.

"After we made a phone call, Trump had instructed the U.S. Treasury secretary to call our Treasury and Finance Minister Mr. Berat [Albayrak] in 24 hours. They had discussed the possible steps on this issue. Afterward, our Foreign Minister Mevlüt Çavuşoğlu held a phone call with Mr. [Mike] Pompeo. Yesterday, when I reminded Trump, he said to me, 'I will instruct my treasury secretary to follow the case. I thought that the issue was closed, why is it taking this much time,'" Erdoğan said.

Mehmet Hakan Atilla, the deputy general manager of the Turkish state lender Halkbank, was sentenced to 32 months in jail earlier this year in the U.S. for evading the Iran sanctions. Turkey had said that the case had been politically motivated, accusing the U.S. court of taking forged evidence and statements fabricated by supporters of Fetullah Gülen, the leader of the Gülenist Terror Group (FETÖ). FETÖ carried out the failed July 15, 2016 coup attempt, during which 251 were killed and more than 2,200 were injured.

Erdoğan insists on demand for reforming the UN

Erdoğan said that he discussed with U.N. Secretary-General Antonio Guterres the ongoing conflicts in Yemen, Syria, Afghanistan and Myanmar which have long remained unresolved, and reiterated his call to reform the U.N. Security Council to transform it into a more functional body.

"Mr. Guterres shares [the] same opinion with us. We should increase the sanction power of the U.N. Security Council and its capability for intervention [in conflicts]. It should not solely cling on the initiation of five countries. The permanent member countries can be increased to 20, and power for intervention can be provided for those countries," he said.

His words were a reference to the U.S., China, Russia, France and Britain, the Security Council's five permanent members, which are the only ones that hold veto power in the council.The president also criticized the inefficiency of international cooperation in rehabilitating countries that have suffered due to conflicts and economic troubles.

"Often, meetings are held to support underdeveloped countries. These are not enough, we should move these efforts forward. These countries, who are boasting of their assistance, stay behind when it comes to taking action. We are the number one country in humanitarian aid in relation to the gross domestic product," he said.

With its humanitarian aid expenditures that were nearly 1 percent of its gross domestic product (GDP), Turkey was the most charitable nation in 2017, according to the Development Initiative's (DI) Global Humanitarian Assistance Report.

Speaking on drilling activities in the Eastern Mediterranean, Erdoğan said that the oil in Cyprus' territorial waters and on the island belong to all Cypriots, and an agreement should be made for fair distribution at the starting of the drilling work.

"The distribution should be conducted accordingly to population of the northern and southern parts. Since the very beginning, an agreement is needed with the inclusion of authorities of the Turkish Republic of Northern Cyprus," Erdoğan said.

Turkey's first seismic vessel, Barbaros Hayrettin Paşa, which was bought from Norway in 2013, has been conducting exploration operations in the Mediterranean since April 2017. Additionally, Turkey's second vessel, the MTA Oruç Reis, which Turkish engineers built in a local shipyard in Istanbul in June, is undertaking work in the Black Sea.

Erdoğan said that intense international diplomacy traffic is ahead of him, which will start with Russian President Vladimir Putin's visit to Istanbul on Nov. 19 on the occasion of the completion of the sea part of the Turkish Stream project.

The Russian president's program will be followed by the visit of Qatari Emir Sheikh Tamim bin Hamad Al Thani on Nov. 26 to attend the 6th Turkey-Qatar Supreme Strategic Committee Meeting in Istanbul.

At the end of this month, Erdoğan will chair a meeting of the Islamic Cooperation Organization's (OIC) Committee for Economic and Commercial Cooperation (COMCEC). Erdoğan stressed that Saudi Arabia's decision of barring 1.5 million Palestinian citizens from Hajj and Umrah will be discussed at the COMCEC meeting.

The president will arrive in Argentina on Nov. 30 for a two-day visit to attend the G-20 meeting. Erdoğan said that his visit could be extended to one week as he considers visiting two or three more countries in South America after the G-20 meeting.