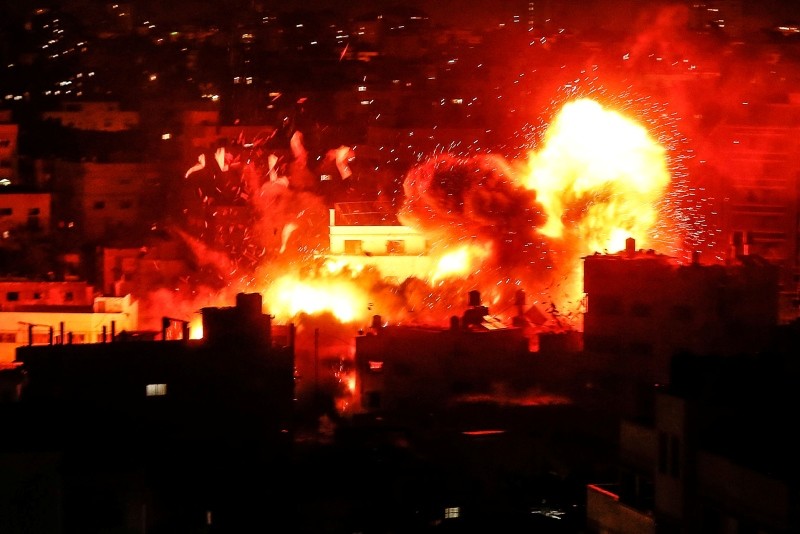 This Nov. 12, 2018 photo shows a ball of fire above the building housing the Hamas-run television station al-Aqsa TV in the Gaza Strip during an Israeli airstrike (AFP Photo).
by Daily Sabah Nov 13, 2018 12:00 am

Kalın called on Israel to immediately stop the assault against Palestinians in the blockaded territory.

"The international community, which has remained silent against Israel's attacks, should shoulder responsibility and act," he said.

The Ramallah-based Palestinian government on Tuesday held Israel responsible for the eruption of violence in the blockaded Gaza Strip.

"The occupation government is dragging the region into further dangers and tensions," government spokesman Youssef al-Mahmoud said in a statement.

He warned the Israeli government against committing "new massacres against the Palestinian people."

Artillery units near the Gaza-Israel buffer zone have reportedly targeted concentrations of Palestinian activists in central Gaza, along with resistance positions in the town of Jabalia and the city of Deir al-Balah.

The Israeli military said some 400 rockets and mortars have been launched from Gaza since the current round began on Monday afternoon, with about 100 of them intercepted by Israel's Iron Dome defense system.

Israel has hit more than 100 targets it says are linked to militants in Gaza, including a strike that destroyed the TV station of the Palestinian resistance movement Hamas.