Culprits of Khashoggi murder should be brought to justice in Turkey, Ankara reiterates 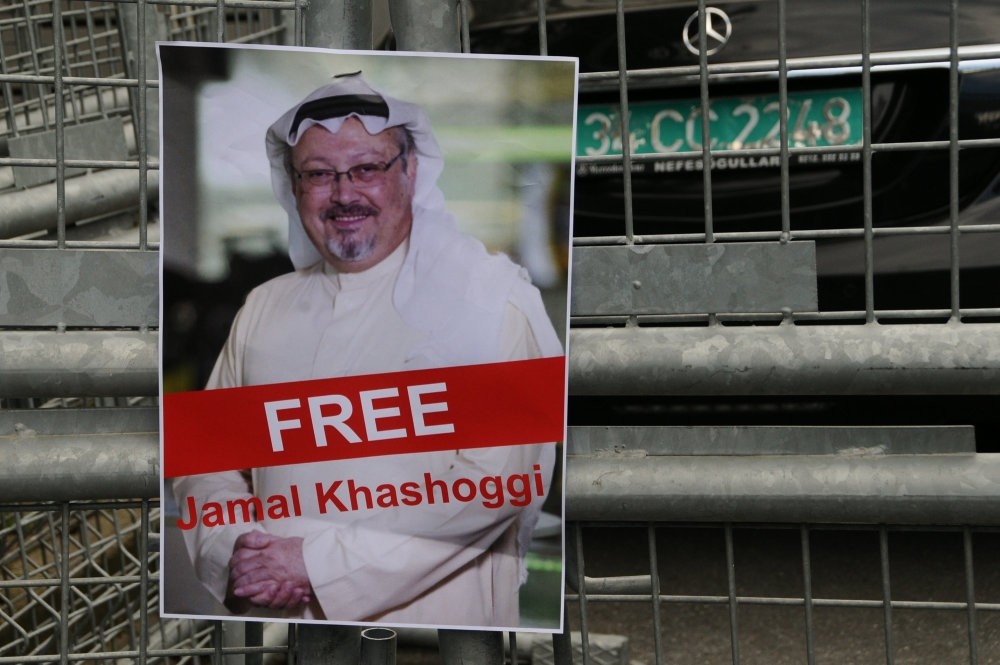 A picture of journalist Jamal Khashoggi is seen posted on a police fence during a demonstration in front of the Saudi Consulate in Istanbul, Oct. 8.
by Daily Sabah Nov 15, 2018 12:00 am

Ankara insists that since the crime was committed within the boundaries of Istanbul, the suspects in the killing of Jamal Khashoggi should be judged in Turkey rather than Saudi Arabia

Ankara has reiterated its proposal to have the suspects involved in the premeditated murder of journalist Jamal Khashoggi be put to trial in Turkey, where the crime was committed, and called on the international community to have a unified and consistent stance on shedding light on the unknowns of the case. "Although the consulate is the soil of Saudi Arabia, the murder was committed within the boundaries of Turkey. A trial in Turkey would be conducted in accordance with the standards of international law," Ömer Çelik, the ruling Justice and Development Party (AK Party) spokesperson, said in a press conference in Ankara Thursday.

"The murder cannot be committed without an order from higher-ups. The whole world is wondering about the answer to the question of who gave the high-level order," Çelik stated. Khashoggi, a columnist for The Washington Post and a critic of Saudi Crown Prince Mohammed bin Salman, also known as MBS, was reported missing by his fiancee Hatice Cengiz after entering the Saudi Consulate in Istanbul to obtain marriage documents on Oct. 2. Khashoggi was immediately strangled and then dismembered presumably by a 15-person assassination team that arrived in Istanbul from Saudi Arabia and visited the consulate when the journalist was inside. The body of the journalist has yet to be found.

Turkey has since posed several key questions to Riyadh, including the whereabouts of the body and the main actor in the ordering of the killing, and urged the international community to maintain pressure on those responsible for the incident for justice to be served.

The 15 member Saudi team, who were involved in carrying out the murder plan, had left shortly after the murder and were later arrested by Saudi authorities as part of the investigation initiated by Riyadh.

With an aim of involving the international community in efforts to hold the culprits accountable, Turkish officials have been continuously sharing information with other countries. Turkey has shared an audio recording of the incident and other evidence with U.S., German, French and Canadian authorities.

Çelik, however, criticized the international community for not having a concrete and unified stance against those responsible for the incident, saying the response has not moved beyond mere rhetoric. He added that while the EU member countries have condemned the incident, in what he described as "rhetorical" statements, the bloc has not yet been able to spell out its firm position in holding those involved accountable.

Commenting on the recent remarks by French Foreign Minister Jean-Yves Le Drian that he was not aware of the audio recordings of the Khashoggi murder that was given to France by Turkey, Çelik said they condemn the unfortunate remarks and stated that his statements were "irresponsible and wrong."

Pointing out that Turkey shared the audio recordings with French intelligence, Çelik said, "If the foreign minister of France is not following the matter, it is their problem."

On early Monday, Le Drian said that France was not in possession of the recordings, accusing President Recep Tayyip Erdoğan of playing a political game. Later on Tuesday, The French Foreign Ministry reportedly said that Le Drian's comments about Turkey over the recordings were misunderstood. French daily Le Monde reiterated the same thing and said he "wanted to say that he did not receive enough information to allow him to reach to a complete truth."

On Monday, Erdoğan stressed that the recordings from the Saudi Consulate in Istanbul was given to Saudi Arabia, the U.S., France, Canada, Germany and the U.K.

In relation to the issue Erdoğan told journalists following his two-day official visit to France on Monday, "The recordings are really appalling. Indeed when the Saudi intelligence officer listened to the recordings he was so shocked he said: 'This one must have taken heroin, only someone who takes heroin would do this.'"

Riyadh has presented an evolving narrative about what happened to Khashoggi. Initially claiming that the journalist left the consulate without harm, Saudi Arabia later played down the incident as an accidental killing in a fistfight. Almost three weeks after the disappearance, Riyadh finally admitted that Khashoggi was murdered in a premeditated fashion, cementing doubts of the involvement of a high-ranking Saudi official. Yet, the Saudi government claimed the Saudi royal family had no prior knowledge of a plot to murder the journalist.

TURKEY ONLY SEEKS THE TRUTH

The case also has brought near unprecedented international scrutiny on Saudi Arabia and its powerful crown prince. Yet, the U.S. has been unwilling to sanction Saudi Arabia and criticize the Saudi crown prince by downplaying the role of the prince, as Riyadh is considered Washington's important ally to contain Iranian power in the region.

U.S. National Security Adviser John Bolton said on Tuesday that he did not think the recordings of the murder shared by Turkey implicated MBS's involvement, while U.S. State Department Spokesperson Heather Nauert said Mike Pompeo, the secretary of state, has not listened to the recordings.

"While Turkey does not accuse anyone directly, Ankara will also not let anyone cover up the incident," Çelik said, and continued, "Turkey is only after the truth."

He also added that Pompeo should be aware of the shared evidence and that CIA Director Gina Haspel was already informed previously.

Previously the U.S. revoked the visas of responsible individuals in the killing and President Donald Trump indicated Riyadh was trying to cover up the matter and the prince may have been involved in the case. But, Trump maintained that he will leave the consequences up to Congress, which he said will examine the applicability of the global Magnitsky sanctions which targets people responsible for human rights violations or corruption.

Despite reluctance from the Washington administration for further sanctions, several U.S. lawmakers are pushing for dramatic action against Saudi Arabia; including ceasing arms sales to the kingdom and defunding the Saudi-led coalition war effort in Yemen.

The Republican chairman of the Senate Foreign Relations Committee, Bob Corker, said Thursday that the Senate could vote before the end of the year on legislation to punish Saudi Arabia over the murder of Khashoggi.

"Senators are looking for some way to show Saudi Arabia the disdain they have for what has happened, with the journalist, but also concerns about the way Yemen has gone," Corker told Reuters.