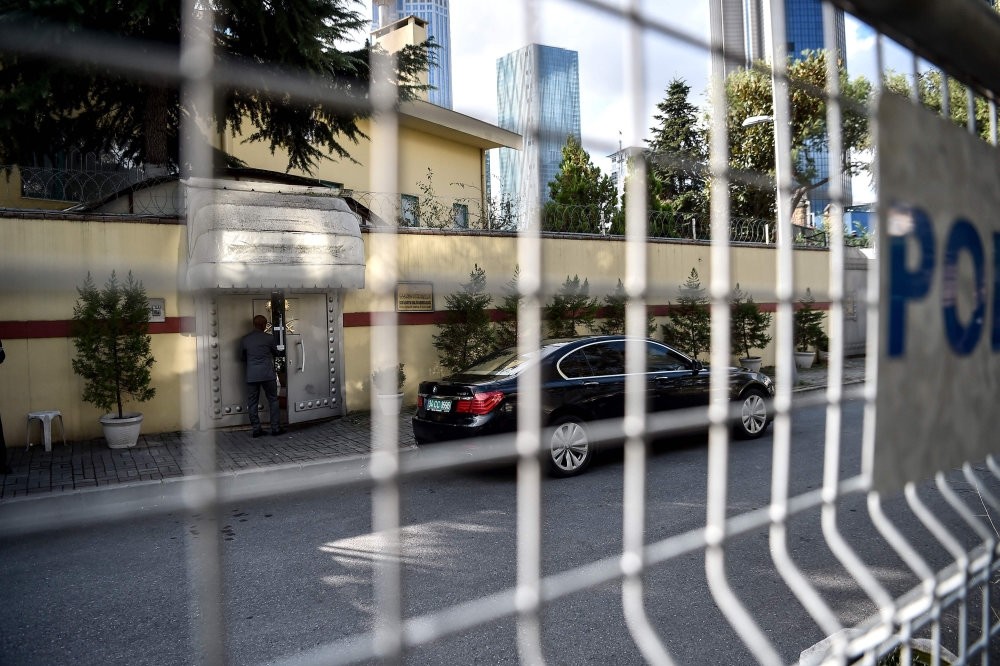 A security team member opens the door to the Saudi Consulate in Istanbul, where journalist Jamal Khashoggi was killed, Oct. 10.
by Daily Sabah Nov 17, 2018 12:00 am

Turkey has strongly rejected claims that Ankara was to tone down their Khashoggi investigation in exchange for Washington looking into the extradition of U.S.-based FETÖ leader, Fetullah Gülen

Ankara has underlined that Turkey will not hold back the investigation into the murder of Saudi journalist Jamal Khashoggi in return for the leader of the Gülenist Terror Group (FETÖ), rejecting recent claims. "Turkey's pending request for Fetullah Gülen's extradition from the United States and the investigation into Saudi journalist Jamal Khashoggi's murder are two separate issues. They are not connected in any way, shape or form," a Turkish official told Daily Sabah late Thursday. NBC News reported on Thursday that the U.S. administration has been looking for ways to trade the FETÖ leader to decrease Turkey's pressure on Saudi Arabia.

Accordingly, the Donald Trump administration has asked several federal agencies to find legal means to extradite the leader of FETÖ to Turkey. FETÖ and its U.S.-based leader Gülen orchestrated the defeated coup on July 15, 2016, which killed 251 people and wounded nearly 2,200. FETÖ is behind a long-running campaign to overthrow the state through the infiltration of Turkish institutions, particularly the military, police and judiciary.

Khashoggi, a columnist for The Washington Post, was known for being a critic of Saudi Crown Prince Mohammed bin Salman, was killed on Oct. 2 inside the Saudi Consulate in Istanbul. In relation to the murder of the journalist, Ankara has been stressing that those responsible need to be held accountable and exerting all necessary efforts to shed light on the murder.

Earlier Thursday the Saudi state prosecutor's office announced that 21 individuals had been taken into custody over the killing and that charges had been set against 11 of them. Five of them face possible execution for the murder, according to the prosecutor.

Meanwhile, the U.S. State Department denied reports of the White House's actions toward extradition later Thursday, saying that Washington continues to review documents sent by Turkey on the case. State Department spokeswoman Heather Nauert underlined that the extradition of the FETÖ leader and the investigation of the Khashoggi murder were two separate issues.

In a recent move, the U.S. Treasury imposed sanctions against 17 Saudis on Thursday, including Saud al-Qahtani, a former top aide to the crown prince, as well as Saudi Consul General Mohammed al-Otaibi.

However, U.S. senators have found the Treasury's move insufficient and introduced legislation later on Thursday that calls for suspending weapon sales to Riyadh and prohibiting U.S. refueling of Saudi coalition aircraft for Riyadh's campaign in Yemen against the Iran-backed Shiite Houthis.

Senator Bob Menendez, the top Democrat on the Senate Foreign Relations Committee, was quoted by Reuters that earlier sanctions on 17 Saudis by President Donald Trump's administration were not enough to ensure a credible investigation of Khashoggi's death and an end to hostilities in Yemen. "We are putting teeth behind these demands with regular oversight, sanctions and suspension of weapons sales and refueling support," he said in a statement, a Reuters report added. This legislation is being supported by both Republican and Democrat senators.

"We regard the announcement that they made as a good first step; it's a step in the right direction," Nauert told reporters on Thursday, following the Saudi prosecutor's statement on Khashoggi.

Despite the first indictments in the Saudi probe, many questions remain unanswered in the murder of Khashoggi, Germany's Foreign Ministry said on Friday.

Speaking at a news conference in Berlin, Christofer Burger, deputy spokesman for the Foreign Ministry, said Germany is still waiting for full disclosure and accountability from Saudi Arabia.

On Thursday, a Saudi prosecutor said Khashoggi was drugged and then dismembered. According to the latest Riyadh account, the Saudi team was initially supposed to persuade or force Khashoggi to return to his country. The head of the team reportedly, however, concluded that his transfer was not possible by force and decided on murder.

Yet, this account is in contradiction with further evidence Turkey has, reported Abdulkadir Selvi, a columnist for Turkish daily Hürriyet, in the newspaper's edition published on Friday. Initially, Turkey said there was a voice recording of the incident, which has been shared with related countries, including the U.S., Germany, France, Canada and Saudi Arabia. Selvi argued in his column that there is a second 15-minute voice recording that clearly shows that the murder was premeditated; a claim that rejects the Saudi prosecutor's account from Thursday. He also added that the second voice recording proves the 15-member team was already in the consulate before Khashoggi's arrival in the building and that they were already discussing how to execute the murder.

Shortly after the Saudi prosecutor's statement on Thursday, Foreign Minister Mevlüt Çavuşoğlu said the explanations were not satisfactory and that Ankara will continue to seek answers for the unknowns in the case.

"We understand that 11 people are currently detained. Previously, 18 people were detained. There is the demand for the death penalty for five of these 11 people. Why are the others left free? I have to say that at this point, I did not find some statements fully satisfying," Çavuşoğlu told a conference in southern Turkey's Alanya. He added that Turkey will continue to closely follow the case. "Where is Khashoggi's body? The ones who gave the order, [the] ones who are the real instigators should be revealed. This process should not be closed down this way," Çavuşoğlu emphasized, saying that his Saudi counterpart had informed him about the statement beforehand.

The Washington Post, where Khashoggi was a frequent contributor, said in an editorial piece published on Friday that the new Saudi account was "shocking in its audacity."

"By offering up this incredible account, the Saudi regime is baldly defying all those, including leading members of Congress, who called for full disclosure and accountability." The Washington Post editorial also said the "Trump administration appears ready to accept its stonewalling."

It further added that there is a "need for a genuinely independent international investigation led by the United Nations." A similar proposal was also made by Çavuşoğlu on Wednesday. Turkey, however, also has said that the crime was committed in Istanbul and that Riyadh should send the suspects to Turkey to stand trial in Turkish courts.

Saudi Foreign Minister Adel al-Jubeir dismissed on Thursday calls for an international probe, saying the investigation is a "legal case and is thus in the hands of Saudi Arabia's judiciary."