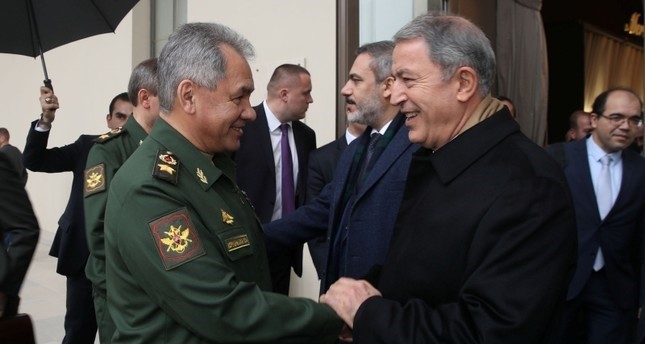 Defense Minister Hulusi Akar and his Russian counterpart Sergei Shoigu discussed on Sunday recent developments in Syria's Idlib in a phone call in the wake of renewed Russian airstrikes on opposition west of Aleppo.

The ministers discussed recent attacks and provocations in Idlib buffer zone which aim to discredit the Sochi agreement.

On Sunday, warplanes struck opposition territory in northwestern Syria for the first time since Turkey and Russia agreed to create a buffer zone in the province of Idlib in September, the Syrian Observatory for Human Rights said.

The Syrian opposition alliance denied any involvement in an alleged chemical weapons attack on regime-held Aleppo and accused Bashar Assad regime of staging the attack to undermine the cease-fire.

It had threatened an assault on opposition territory, home to around 3 million people, but a deal for a buffer zone around it was reached in September between Ankara and Moscow.

After a Sept. 17 meeting in Sochi between President Recep Tayyip Erdoğan and his Russian counterpart Vladimir Putin, the two sides agreed to set up a demilitarized zone — in which acts of aggression are expressly prohibited — in Idlib province.

According to the terms of the deal, opposition groups in Idlib will remain in areas in which they are already present, while Russia and Turkey will conduct joint patrols in the area with a view to preventing a resumption of fighting.