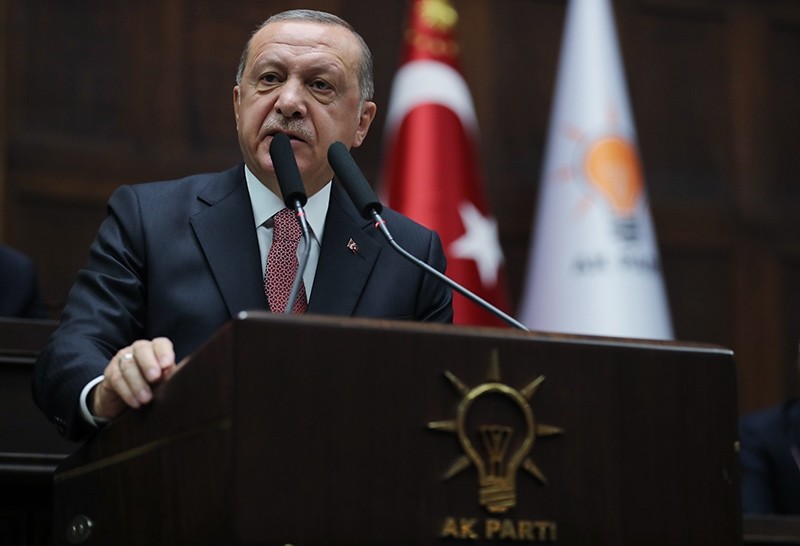 President Recep Tayyip Erdoğan on Tuesday addressed several current issues of international relations, including tensions in the eastern Mediterranean, the recent spat between Russia and Ukraine and the U.S. support for PKK-linked People's Protection Units (YPG) terrorists in Syria in the pretext of Daesh terrorists.

Erdoğan began by warning Greece and Greek Cyprus against "reckless" actions in the eastern Mediterranean.

"The reckless behavior of Greece and the Greek Cypriot Administration (in hydrocarbon search in the eastern Mediterranean) by receiving support from several European states has become a threat and danger primarily for themselves," Erdoğan said at the ruling Justice and Development Party (AK Party) parliamentary group meeting.

"As Turkey, we will not make the slightest concession from our theses neither in the eastern Mediterranean or any other region and will defend our rights up to the end," he added.

Turkey has consistently contested the Greek Cypriot Administration's unilateral drilling activity in the Eastern Mediterranean, saying Turkish Cypriots also have rights to the resources in the area.

On Oct. 18, the Turkish Navy blocked a Greek frigate trying to interfere with Turkey's first seismic vessel Barbaros Hayreddin Paşa. The incident prompted an immediate response from Turkish officials who warned Greece against actions in the Mediterranean that would spark tensions in the region.

Erdoğan also addressed the recent escalation of tensions between Russia and Ukraine in Kerch Strait separating Crimea with mainland Russia, saying: "We call on our Russian and Ukrainian friends to solve their problems through dialogue as soon as possible and make the Black Sea a sea of peace."

"Turkey would like to see brother nations Russia and Ukraine side by side, not facing off, when the world is faced with serious threats," he said.

The Ukrainian navy says Russian ships fired on and seized three of its artillery ships Sunday. The incident sharply escalated tensions that have been growing between the two countries since Moscow annexed Crimea from Ukraine in 2014.

In regards to Daesh terror group in Syria, Erdoğan said: There's no more Daesh left in Syria anymore. There are only some small bands trained and kept in reserve under the disguise of Daesh to create chaos in (Turkey) and this region."

"As Turkey, we commit to a complete removal of the leftovers of this organization (Daesh) within a couple of months," he said.

The U.S. has partnered with the PKK-affiliated Peoples Protection Units (YPG) in Syria in its fight against Daesh. The material support and joint patrols between the U.S. and YPG have disturbed Ankara, who has urged Washington that partnering with one terrorist group to fight another will not achieve its intended goals.

Turkey recognizes the PKK and YPG as organically linked terrorist groups. The U.S., however, while listing the PKK as a terrorist group, has supported the YPG militarily, under the pretext of fighting Daesh. To date the U.S. has sent 4,700 heavy weapons and armored vehicles to the YPG.

Earlier this month, U.S. Special Representative for Syria James Jeffrey said that the U.S. administration hopes that the fight against Daesh, in its last foothold in northeastern Syria, will end within months.

In accordance with the Manbij agreement, Turkish and U.S. troops began joint patrols on Nov. 1. Since June 18, the Turkish Armed Forces (TSK) has carried out 68 unilateral patrols in Manbij.