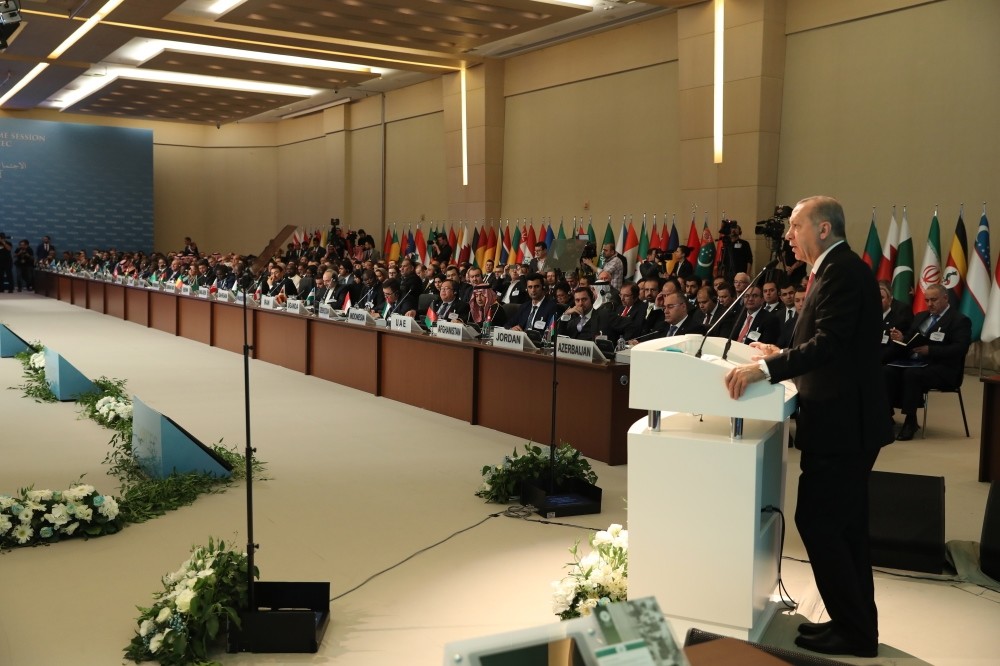 President Recep Tayyip Erdou011fan speaking during the 34th session of the COMCEC in Istanbul, yesterday.
by Daily Sabah Nov 29, 2018 12:00 am

Muslim countries should not be fooled by plots hatched by Western counties with interests in the region that create instability; instead they should unite around a common future

President Recep Tayyip Erdoğan yesterday urged the leaders from Muslim countries to unite in face of regional challenges and those aiming to instigate divisions and conflict between them.

"We should not build new borders and walls in our souls, in a region which had its borders drawn in blood. Muslims should no longer be fooled by those who try to incite their differences and turn them on each other," Erdoğan said during his address to the members of the Standing Committee for Economic and Commercial Cooperation of the Organisation of the Islamic Cooperation's (COMCEC) 34th Ministerial Session, in Istanbul.

The leaders of the Muslim world have often been criticized of falling into conflict with each other, instead of uniting, mostly due to regional power alliances shaped by Western powers. Particularly, Western interest in regional resources, such as gas and oil, have made politically weak regimes align with Western powers for the maintenance and protection of their respective regimes in face of challengers.

In addition, the "divide-and-rule" approach has often been used for Western interest particularly in the Middle East, following the fall of the Ottoman Empire and the decline of its influence.

"I want to say it clearly that the foundational reason behind most of the crises, tensions, bloodshed and tears we witness, from Syria to Iraq, from Yemen to Palestine, is the design put to work with the Great War [World War I]," Erdoğan said, referring to what has been known as the Sykes-Picot agreement, a secret 1916 deal signed by the United Kingdom and France that divided Ottoman territories in the Middle East between respective spheres of influence."We should not fall into traps of those moves with the mentality that a drop of oil is more valuable than a drop of blood," Erdoğan warned the participants at the meeting, and added that while history cannot be reversed, necessary lessons should be taken for a better common future. The COMCEC 34th Ministerial Session began on Monday will last through Thursday.

Erdoğan also said Muslims will continue to back the Palestinian struggle against the occupation of Israeli settlers.

"As long as Muslims and people defending justice and freedom exist, Palestine will also continue to exist," he added.

Urging people to visit Jerusalem, Erdoğan said: "International organizations have disappointed Muslims over Palestine and civil wars, although Muslims pressed them for solutions."

"The policies, which do not conform to our region's history, social and humane dynamics, caused suffering, destruction and infighting not only in Palestine but also in other places. With World War I, the Western countries exported the maladies that had been eating away at their systems for centuries," the president said, while adding that the centenary of the Great War should be a reason to understand the era.

THE WORLD IS BIGGER THAN FIVE

The president said international organizations, such as the United Nations and the U.N. Security Council, do not serve the interests of the oppressed in the global community, but rather function to serve and protect the interests of the permanent five members of the council. "We have seen over and over again that concepts such as democracy, human rights and freedom only mean something when it serves their interests," the president added.

"Such painful experiences, disappointments and these double standards lie behind our objection that 'the world is bigger than five,'" Erdoğan said, referring to his commonly used phrase the "world is bigger than five." Turkey has previously voiced its concerns over the structure of the U.N. body, saying it should be more inclusive, be restructured and reformed to serve the interests of the global community as a whole, based on the needs of the day.