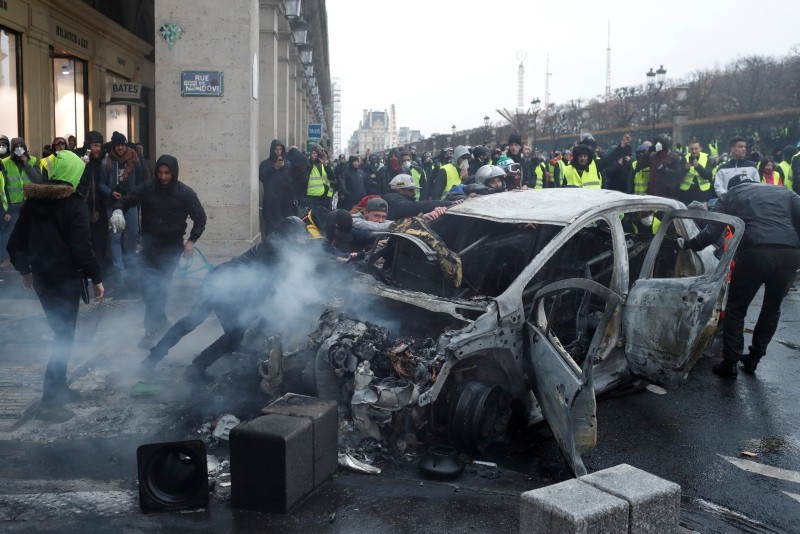 The Turkish Foreign Ministry on Sunday issued a travel advisory for citizens traveling to France, warning them against ongoing violent protests in Paris and across the country.

The warning published on the official website advised citizens who live in or will travel to France to avoid areas of demonstrations, and not to be in places which could endanger their safety.

It also asked Turkish citizens to exercise caution while traveling on highways and intercity roads, citing recent closure of roads, barricades and blockades.

The ministry also advised citizens living and traveling to France "to follow local media, to follow further warnings of our French authorities, our ministry, our embassy in Paris."

Demonstrators, who generally live in rural areas due to high rents in the city center, have demanded from Macron a reduction in fuel taxes and to make economic arrangements that will ease their lives.

The French police on Saturday cracked down on protesters around the famous Champs-Elysees Street in capital Paris with tear gas and water cannons.

Demonstrators set a large number of vehicles and trash cans ablaze and pelted stones and bottles at the police.

They called for Macron's resignation and sprayed slogans against him on the walls.

Some tried to cross the security barriers to the Elysee Palace but police blocked them using tear gas.

Streets in several cities were closed for traffic.

According to French authorities, around 5,500 protesters marched onto streets in Paris.

So far, at least two people have been killed and 890 people injured, while 158 of them are security officials, as well as 1,081 people have been detained and 9 protestors were sentenced to four months in prison during over two weeks of demonstrations.

French leader warned that perpetrators of the violence in ongoing protests in Paris will be punished.

According to a survey conducted in the country, 84 percent of French people support the "yellow vests", mostly from the middle-income group.

In France, fuel prices have increased by more than 20 percent in the last year.