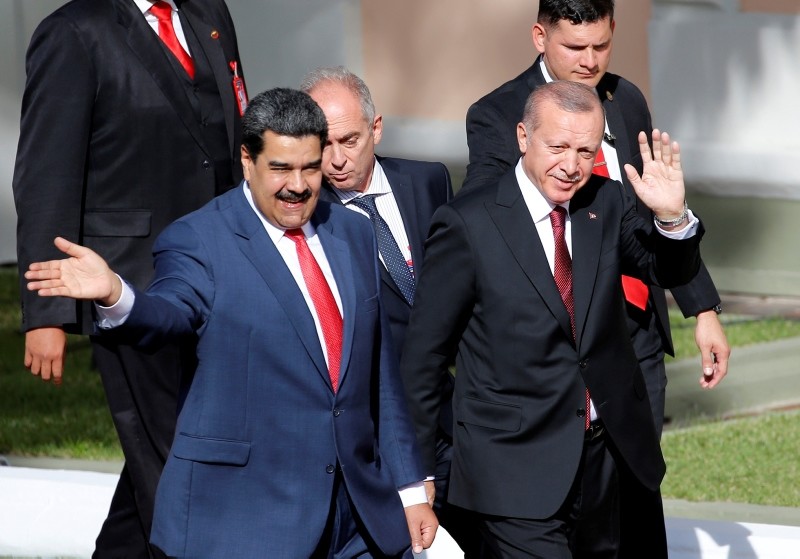 President Recep Tayyip Erdoğan was welcomed with an official ceremony Monday with the Turkish national anthem performed by Venezuelan soldiers in Caracas, a memorable welcoming for the first ever visit by a Turkish leader to the country.

Erdoğan, who is in the country for the Turkey-Venezuela Business Forum, was received by his counterpart Nicolas Maduro at Miraflores Palace in the Venezuelan capital.

The soldiers' performance, in which they sung the anthem in Turkish, was regarded as a brotherly and thoughtful gesture of welcome by Erdoğan and the Turkish delegation.

Videos of the performance quickly spread on social media.

Erdoğan vowed to offer help for Venezuela and he praised Maduro, contrasting the Venezuelan against other world leaders whom he said espouse divisive sentiments.

"I think Mr. Maduro's exemplary attitude is very valuable at a time when enmity toward Islam has risen and Western countries are stoking hostility toward foreigners," he said.

Earlier this year, Maduro had a stop-over in Turkey where he dined at an exclusive steakhouse in Istanbul.

He also sparked a frenzy after he visited the set of Turkish historical- period drama "Diriliş: Ertuğrul" [Resurrection: Ertuğrul] and took photos with the props and wore the costumes.