US Syria envoy Jeffrey to visit Turkey amid ongoing disagreements 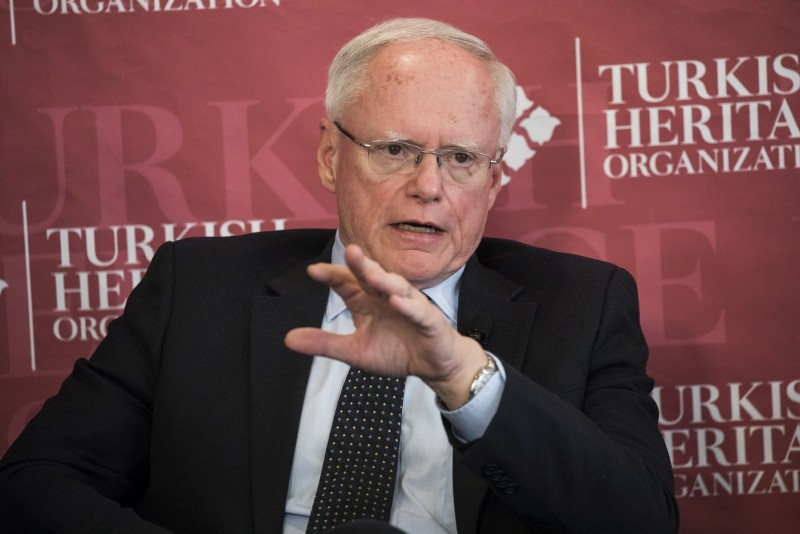 U.S. envoy to Syria James Jeffrey is expected to pay a visit to Turkey over the coming days with an agenda focusing on the crisis in Syria, particularly the Manbij road map and issues related to the east of the River Euphrates.

The Manbij road map was agreed upon with Ankara in June with the aim of clearing the PKK's Syrian affiliate the People's Protection Units (YPG) from the northern Syrian district.

In the light of intense criticism over ongoing U.S. support to the YPG in northern Syria, the U.S. State Department said on Tuesday that Jeffrey and Deputy Assistant Secretary for Levant Affairs and Special Envoy for Syria Joel Rayburn are coming to Turkey for a high-level meeting on Syria that is expected to be held at the Foreign Ministry in Ankara on Thursday.

"In Turkey, the Ambassador will meet with Turkish leaders and other senior officials to discuss the promotion of stability and security in Syria," said the State Department in a statement.

He will also conduct a "High-Level Working Group on Syria" with Turkish officials ‎to address security concerns of the U.S. and Turkey and continue progress on issues of mutual interest regarding the Syria crisis, according to the statement.

In relation to the agenda of the visit, Foreign Minister Mevlüt Çavuşoğlu said Wednesday that YPG-held areas east of the Euphrates will top the agenda. During his visit to Turkey Jeffrey is expected to meet with Deputy Foreign Minister Sedat Önal along with other senior security officials and diplomats in Turkey.

On Monday, Jeffrey suggested ending the Astana peace talks between Turkey, Russia and Iran in favor of U.N.-led Geneva talks.

"They tried and they failed, or at least up to this point they failed. And if they are still failing by the 14th, the U.S. view ... is let's pull the plug on Astana," Jeffrey said and added "and then we go back to the UN."

"I don't think those statements were his own thoughts," Çavuşoğlu said.

Russia, Iran, and Turkey launched the Astana peace process in January 2017 to bring all warring parties in the Syrian conflict to the table to find a political solution - the process is complementary to the U.N.-sponsored peace talks in Geneva. The main result of the Astana talks was the establishment of de-escalation zones in the northern province of Idlib and parts of neighboring Latakia, Hama and Aleppo.

The meeting between Jeffrey and Turkish officials is considered as significant as Turkey will once again convey its concerns over the sluggish progress on the Manbij deal that foresees the withdrawal of the terrorist organization from the city.

Turkish and U.S. military forces completed the second round of training to carry out joint patrols in Manbij area earlier this week. Yet, Turkey wants the process to ramp up. Acceleration demands of the process are expected to be underscored during Jeffrey's visit.

The U.S.' decision to set up observation points near the Syrian-Turkish border is another topic that is expected to be discussed during the meetings with Jeffrey.

Ankara conveyed its discomfort to the U.S. over the establishment of observation points in Syria. Many regarded Washington's recent moves as an attempt to distinguish and legitimize YPG existence in Syria.

President Recep Tayyip Erdoğan and other senior officials have been repeatedly emphasizing that if the threat toward the country's border security from the YPG continue, Turkey will expand its military campaign into YPG-held areas east of the Euphrates.

U.S. support for the YPG terrorist organization, which facilitated the groups' efforts to form an autonomous region, has been a major sticking point in U.S.-Turkey relations. The U.S. has provided military training and truckloads of military support to the YPG, despite Ankara's warnings that the group shares organic organizational and operational links with the PKK, a group considered a terrorist organization by the U.S., the EU, and Turkey. The YPG and PKK's ultimate aim is to establish an autonomous region in parts of Turkey, Syria, Iraq and Iran.

Jeffrey had previously visited Turkey on Oct. 15 for four days as a part of a regional tour that included Qatar and Saudi Arabia.

"In Jordan, Ambassador Jeffrey will meet with Senior Jordanian officials to emphasize the importance of maintaining pressure on the Syrian regime and encouraging all possible efforts to advance the political track as called for in UNSCR 2254," according to the statement of the State Department.

Jeffrey will discuss "additional ways to ensure consistent, unhindered access to humanitarian and medical aid" for the refugees of the Rukban camp.

Located in the desert on the Syrian-Jordanian border, the camp is home to nearly 60,000 refugees displaced by the ongoing conflict in Syria.

"He will also meet with U.S. personnel focused on Syria policy issues from around the world," said the department.

The Syrian regime has imposed a tight siege around the camp, triggering deteriorating humanitarian conditions for its residents.