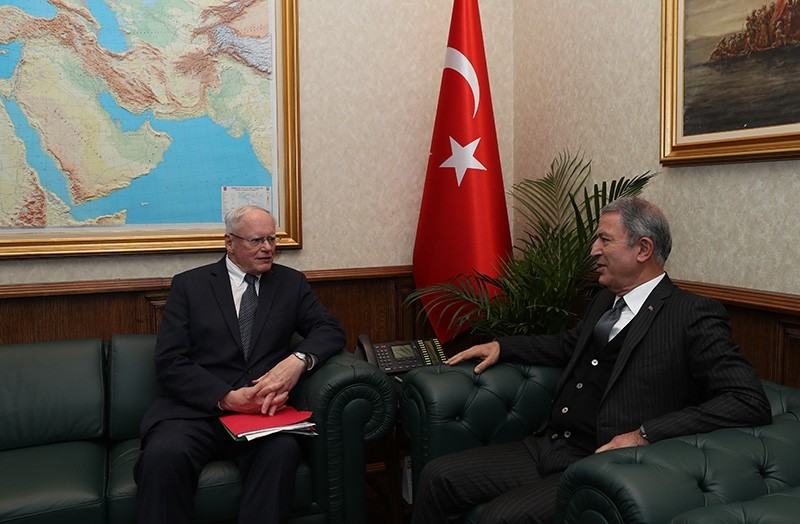 Turkish and U.S. officials held the third meeting of the Turkey-U.S. working group on Syria on Friday, agreeing to continue the Manbij road map and underlining their commitment to Syria's territorial integrity.

The U.S. Special Representative for Syria James Jeffrey was representing Washington in the meeting to address the contending perspectives of the two countries regarding Syria.

"Both sides affirmed their commitment to Syria's sovereignty, independence, unity and territorial integrity and underscored the importance of sustained and irreversible progress on a political solution to the Syrian conflict consistent with UNSCR 2254," a statement released by the Turkish foreign ministry after the meeting said.

The five-hour meeting, held at the Ministry of Foreign Affairs in Ankara, discussed the process of the Manbij roadmap and Turkey's concerns over the U.S.' ongoing support to the PKK's Syrian affiliate the People's Protection Units (YPG). The Turkish delegation was represented by Deputy Foreign Minister Sedat Önal.

"We are committed to accelerated and concrete progress on the Manbij roadmap by the end of the year," the statement underlined, adding that Turkey and the U.S. had "agreed to continue to work on joint planning with regard to other areas as mentioned in the roadmap."

The parties will convene at "the next High-Level Working Group on Syria meeting in Washington, D.C. no later than February 2019," the statement said.

The main point of contention in Turkish-U.S. ties is Washington's steadfast support for the YPG terrorist group.

During the meeting, Turkish officials repeatedly conveyed Turkey's disturbance regarding the U.S.' partnership with the YPG to their counterparts. However, the U.S. appears unfazed in the face of Ankara's highly vocal criticism. Instead of allaying the concerns of its NATO ally, the U.S. opts for partnering with the YPG using the fight against Daesh as an alibi.

Following the meeting, Defense Minister Hulusi Akar met with Jeffrey. Akar reiterated Ankara's call for the U.S. to end its partnership with the YPG and abandon its observation points in northern Syria.

A "terror corridor" along Turkey's southern border will never be allowed, Akar told Jeffrey during the meeting.

Kalın and Jeffrey stressed the success of quadrilateral summit on Syria held in Istanbul in October and agreed on holding such meetings on a regular basis.

On Oct. 27, Istanbul hosted the first ever quadrilateral summit on Syria. Turkish, Russian, French and German leaders examined the situation in the country and offered a plan for the crisis resolution.

The council stressed that the issues agreed on at the summit would contribute to peace in Syria and the region, as well as provide a permanent cease-fire by demilitarization in the northwestern province of Idlib.

Kalın also expressed Turkey's clear stance on the YPG issue and said his country will not permit the existence of any terrorist elements within the borders of the country.

Ankara considers the YPG a serious threat against its national security. While Turkey seeks to preserve the territorial integrity of Syria, a resolution to the conflict remains elusive due to the U.S.' support of the YPG, which pursues a separatist agenda in the country.

Speaking to reporters after the working group meeting, Jeffrey said the Manbij road map requires a series of steps.

"The commitment of the United States was from members of the PYD and YPG, who are present in Manbij, to leave and local councils and the local military personnel not to include members of that organizations.

"And so we're going to take a few more steps to ensure that we meet that criteria as soon as possible. And some of them will be completed by the end of December," Jeffrey said.

"They are not there to stop anyone from shooting... They are to find out what is going on in the ground with the idea that if we are able to observe an area probably there'll be less shooting in that area," he said.

Being asked on the Astana peace process to end the conflict in Syria, which he previously called as a failure, Jeffrey said they do not have a problem with that.

"Astana process is continuing on, we have no problem with that, anything that can deconflict the military situation is fine," Jeffrey said.

In order to prevent the terror group from tightening its grip in northeast Syria and disrupting peace efforts in the region, Turkey aims to accelerate the Manbij process that was launched in June with the U.S. As part of the agreement Turkey and the U.S. agreed to work on the withdrawal of the YPG from Manbij, a YPG-held region in northern Syria. The aim of the Manbij deal is to ensure security and stability in the province by eliminating YPG terrorists and ultimately handing the administration of the province to a body consisting of local people. Yet, progress in the deal, Ankara says, has been "sluggish" and slower than initially planned, due to what has been described as the disingenuous attitude of the U.S. over the plan.

Commenting on the Manbij process, a diplomatic source told Daily Sabah previously that Turkish officials have been attempting to urge their counterparts in the U.S. to accelerate the process and increase the number of joint patrols in Manbij as part of the agreement.

In the latest move, the U.S. said that it is establishing observation posts in northeast Syria, which is held by the YPG. Ankara has been cautious about the U.S.' step as the U.S. might be aiming to act as a buffer between Turkey and the YPG in order to protect the terrorist group and cover its ongoing illegitimate activities on Syrian soil. During the meeting with Jeffrey, Turkish officials were also expected to voice Ankara's concerns regarding the issue.