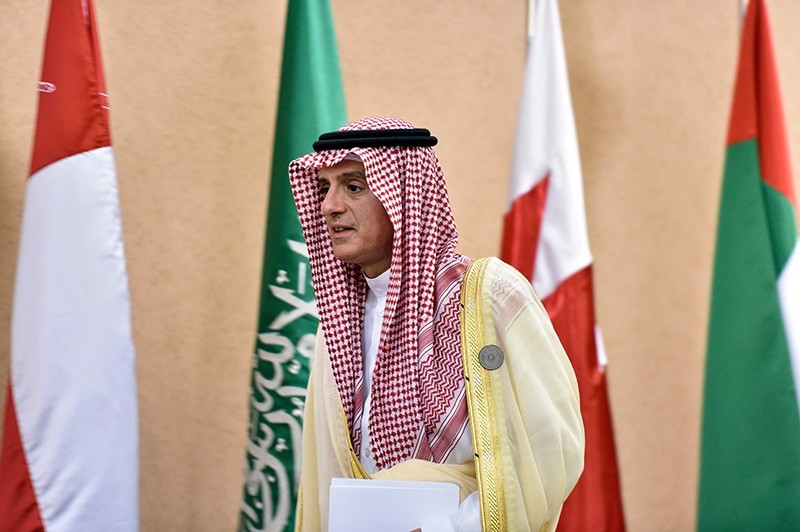 Saudi Foreign Minister Adel al-Jubeir arrives for a press conference at the Diriya Palace in the Saudi capital Riyadh during the Gulf Cooperation Council (GCC) summit on Dec. 9, 2018. (AFP Photo)
by Daily Sabah with Agencies Dec 09, 2018 12:00 am

"We do not extradite our citizens," Adel al-Jubeir said when asked about a Turkish court's arrest order for two Saudi suspects at a news conference at the end of a summit of Gulf Cooperation Council states.

"It's interesting to me that a country that would not provide us with information within a legal format... would issue arrest warrants," he said.

The Turkish Presidency's Communications Director Fahrettin Altun called Riyadh's refusal to extradite the suspects very disappointing and said it would play into the hands of critics "who believe Saudi Arabia has been trying to cover up the murder".

Speaking to Reuters, Altun said Saudi authorities had not been sufficiently cooperative and Turkey had seen "little evidence of the Saudi prosecutors intending to shed light on what happened to Mr. Khashoggi".

Therefore "it will be in the best interest of the international community to seek justice for the late Saudi journalist under international law," Altun said, reiterating Turkey's call for an international probe into the case.

Turkey's foreign minister said last month Ankara may seek a formal United Nations inquiry if its dealings with Saudi Arabia came to an impasse, but Altun's comments appeared to be the most direct call yet to widen the investigation.

Altun said Saudi intelligence operatives, including an autopsy expert, traveled to Istanbul for the specific purpose of killing Khashoggi. The Saudi consul "was apparently complicit in this crime", he added.

Turkish officials said the prosecutor's office had concluded there was "strong suspicion" that the two suspects were among the planners of Khashoggi's Oct. 2 killing at the Saudi consulate in Istanbul.

Khashoggi was killed in the kingdom's Istanbul consulate on Oct. 2 by a team of 15 people consisting of Saudi officials who arrived in Turkey for his murder and a cover-up operation, including dismembering Khashoggi's body. All of the identified individuals have since left Turkey.

Saudi authorities launched an investigation against 21 people including Asiri and al-Qahtani over the murder, detaining some of the suspects and seeking the death penalty for five.