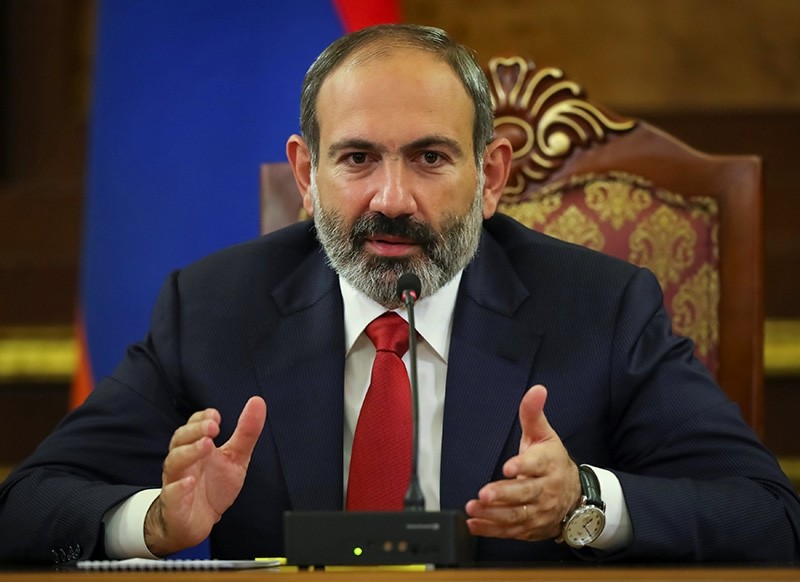 "I have already said many times that we are ready to establish direct relationships with Turkey without any precondition. And we hope Turkey is ready to do the same," Pashinian told reporters at the prime ministry building on Monday

"The problem is that unfortunately relationship with Turkey has been connected with the Nagorno-Karabakh conflict," Pashinian added.

"It is a very strange situation when the relations between two countries can be so strongly connected with a third country, […] I mean Azerbaijan," he said.

"This situation is the biggest problem for our relations with Turkey," he added.

The Armenian occupation of Nagorno-Karabakh – a disputed territory between Azerbaijan and Armenia – led to the closing of the frontier with Turkey, which sides with Baku in the drawn-out dispute.

In September, President Recep Tayyip Erdoğan said during a visit to Baku: "We want good relations with our neighbors but solving the Karabakh problem is the absolute precondition for Turkey to improve ties with Armenia."

"Those who cannot explain what happened in Khojaly 26 years ago, the massacre in Upper Karabakh, and declare the killers heroes, should not give Turkey any kind of history lesson," Erdoğan said, referring to genocide allegations over World War I killings of Ottoman Armenians.

The Khojaly Massacre is regarded as one of the bloodiest and most controversial incidents of the war between Armenia and Azerbaijan for control of the now-occupied Nagorno-Karabakh region between 1988 and 1994.

Political ties between Ankara and Yerevan remain frozen owing to the Karabakh conflict as well as the legacy of killings during the First World War, which the Armenian diaspora and government describe as "genocide" – a description which Turkey refutes. Ankara argues that 300,000 to 500,000 Armenians and at least as many Turks died in civil strife when Armenians rose up against their Ottoman rulers and sided with invading Russian troops.

On Monday, Armenia's election commission said that Pashinyan's My Step Alliance garnered 70.4 percent of the votes at the Sunday's snap parliamentary elections.

In April, Pashinian, who is a former journalist, led mass protests against the ruling Republican Party, which brought daily life in Yerevan to a standstill and forced former Prime Minister Serzh Sargsyan to resign.

Pashinian, who became the nation's prime minister in May, had resigned in October to open a way for snap elections.