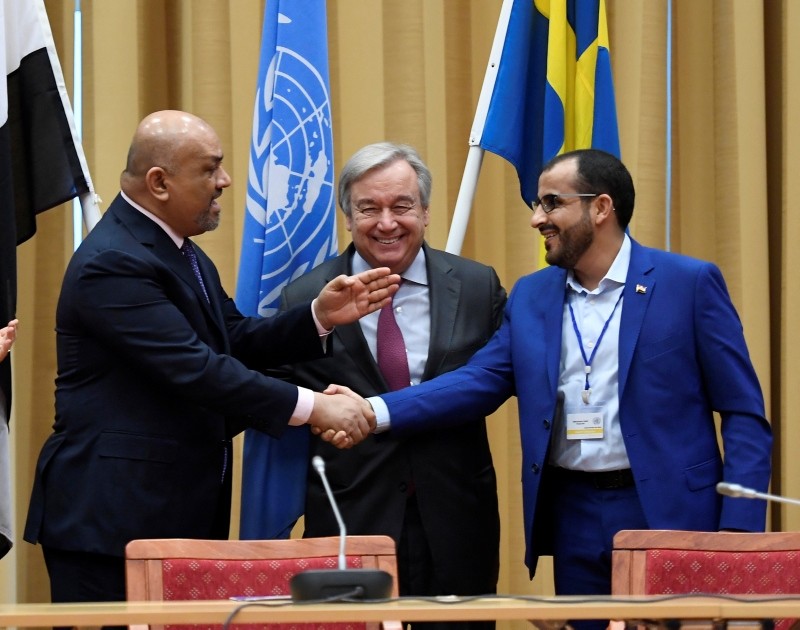 Head of delegation for rebel forces known as Houthis and Yemen Foreign Minister shake hands together with UN Secretary-General during the Yemen peace talks closing news conference at the Johannesberg castle in Rimbo, Sweden, Dec. 13, 2018. (AP Photo)
by Anadolu Agency Dec 14, 2018 12:00 am

Turkey on Friday welcomed the agreements between the Yemeni government and Houthi rebels reached in U.N.-backed peace talks in the Swedish capital Stockholm.

Turkey's Foreign Ministry praised steps to improve the situation in Yemen's southwestern Taiz province and the key port city of Hodeida in which the sides agreed to a cease-fire, as well as plans for a prisoner swap concerning thousands of persons and families.

"We also place importance on assurances that talks on a framework for negotiations for a political solution will continue," it said in a statement.

The statement also underlined that Ankara's main expectation is for the crisis in the war-stricken country and the suffering of Turkey's "Yemeni brothers and sisters" to come to an end, who are three out of four in need of aid.

"As the term chair of the [Organization of Islamic Cooperation] OIC, Turkey will continue to support U.N. efforts towards lasting peace and stability in Yemen in solidarity with the Yemeni people," it added.

U.N.-backed peace talks between the Yemeni government and Houthi rebels kicked off last week in Sweden.

Yemen has been wracked by violence since 2014, when the Houthi rebels overran much of the country and the crisis escalated in 2015 when a Saudi-led coalition launched a devastating air campaign aimed at rolling back Houthi gains.

Saudi Arabia and its allies accuse the Houthis of acting as a proxy force for Iran.

Tens of thousands of people, including civilians, are believed to have been killed and the U.N. estimates that around 14 million Yemenis are at risk of famine.