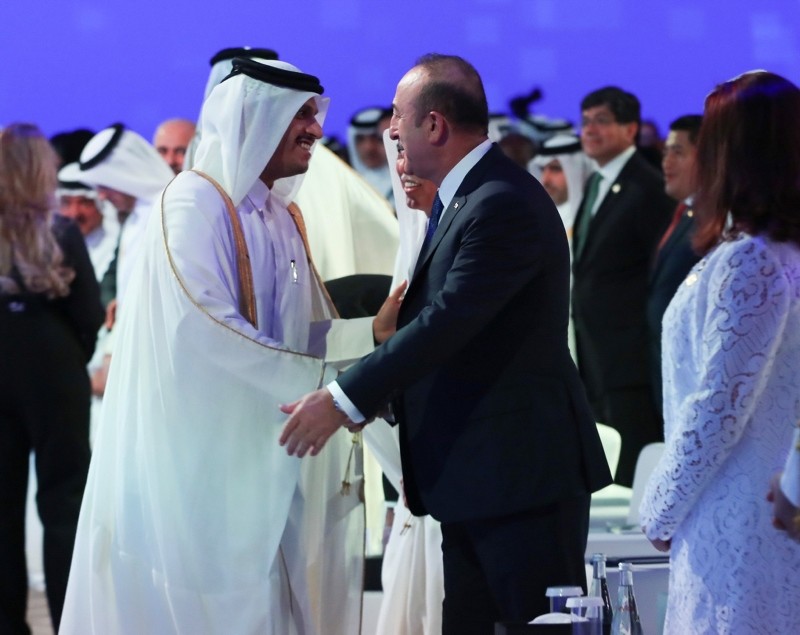 Speaking to reporters on the sidelines of 18th Doha Forum, Çavuşoğlu said Qatar is becoming more self-sufficient every passing day by taking steps to diversify its economy.

"Qatar's economy has been growing. Qatar has been strengthening," the foreign minister said, calling the recent economic situation of the country as an "artificial crisis."

Çavuşoğlu said the sanctions targeting the country is "unacceptable."

"Whatever the problem is, we are against all kind of sanctions," he said, adding: "I hope these issues will be resolved as soon as possible."

Saudi Arabia, Egypt, Bahrain, and the United Arab Emirates cut off all their diplomatic ties with Qatar on June 5, 2017, and accused Doha of supporting terrorism.

In addition to imposing a blockade to the small peninsula nation, the group led by Saudi Arabia released a 13-point list of demands, which required Doha to cut its relations with Iran and shut down its Al Jazeera television network.

By leaving the world's biggest oil organization, Qatar has become the first Arab nation to do so since its foundation in 1960. Qatar had joined the organization one year after its establishment.

The Turkish foreign minister also hailed a large-turnout forum entitled "Diplomacy, Dialogue, Diversity," saying it is the "most significant ones" in the world.

"I think this year's theme and timing of the forum was very good," he said.

In regards to the Oct. 2 killing of Saudi journalist Jamal Khashoggi, Çavuşoğlu said the Saudi investigation into the murder should be "transparent" and "reliable," adding Turkey will continue to pursue the developments.

"We haven't received any new information or outcome of the investigation from the Saudi side," he said, adding "Turkey will not give up on this, we will go to the end."

Earlier this month, the minister said Turkey was in talks over a possible United Nations investigation into the October 2 murder, which has provoked global outrage.

59-year-old Khashoggi, a palace insider turned critic of the Saudi regime, was strangled and his body cut into pieces by a 15-strong Saudi hit squad, according to Turkish officials.

President Recep Tayyip Erdoğan has said that the killing was ordered at the highest levels of the Saudi government, although he has repeatedly absolved the ageing King Salman.