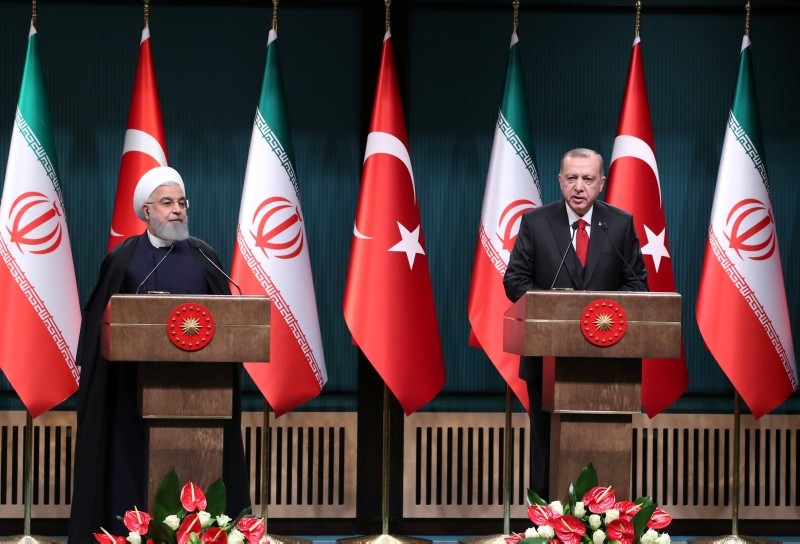 President Tayyip Erdou011fan and his Iranian counterpart Hassan Rouhani hold a joint news conference after their meeting in Ankara, Turkey, Dec. 20, 2018. (Reuters Photo)
by Daily Sabah with AA Dec 20, 2018 12:00 am

Turkey will continue to stand by Iran in the face of 'unjust' U.S. sanctions which jeopardize regional stability and security, President Recep Tayyip Erdoğan said Thursday in a joint press conference with his Iranian counterpart Hassan Rouhani.

"There are so many steps that Turkey and Iran can take together to end the clashes in our region and ensure a peaceful environment," Erdoğan said at a news conference with his Iranian counterpart Hassan Rouhani in the capital Ankara.

Erdoğan said Turkey did not allow any entities seeking to harm the security of the country and the region, adding that it would not all allow them in the future.

Ankara and Tehran have a strong will to increase cooperation in this regard, he stressed.

The president also said Turkey does not approve the U.S. sanctions on Iran since it leads to destabilization in the region.

"We will continue to be in solidarity with brotherly Iran at a time when pressures on Iran mounts which we find unjust," Erdoğan added.

Erdoğan said Turkey aims to increase bilateral trade with Iran to $30 billion from the current $11 billion.

In August, the U.S. re-imposed the first round of sanctions that mainly targeted Iran's banking sector.

The second phase of sanctions -- targeting Iran's energy sector -- came into effect on Nov. 5, although Washington granted a 180-day reprieve to the eight largest buyers of Iranian oil, including Turkey.

He also said the next trilateral meeting on Syria between Ankara, Tehran and Moscow would be held in Russia.

"We must stop the U.S. sanction decision on Iran from impeding us to reach our targets," he said.

Erdoğan said Turkey is ready to do its part to reach the desired level of bilateral ties with Iran.

"Nobody should think that we will end our economic and commercial relations with Iran because of sanctions. I believe we will turn sanctions against Iran into an opportunity in our relations," he said.

Rouhani, for his part, said: "This embargo can be both a threat and damage. It can both decrease our trade volume and limit our relations. However, we can make a good plan and transform these threats into opportunities."

He said the economic potentials between the countries are "more than ever."

The Iranian president invited Turkish businessmen to invest in his country in the field of energy.

"We are ready to allocate all necessary substances, ports, regions and facilities to the investors, if Turkish investors want to invest in any area in Iran to build a refinery and to operate in the field of petrochemicals," Rouhani said.