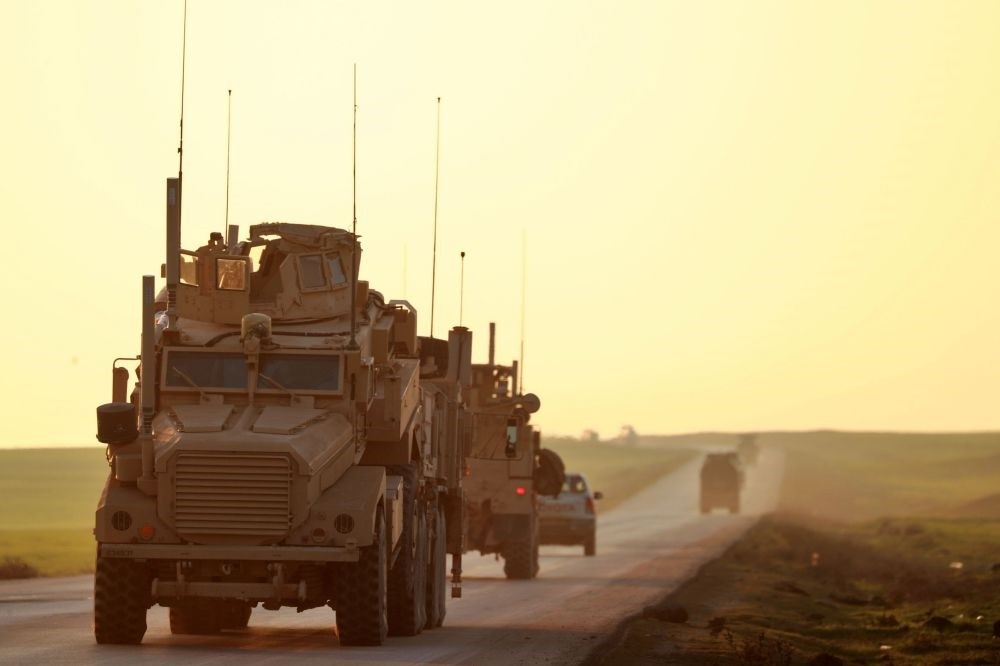 U.S. Marine Corps tactical vehicles are seen driving along a road near the town of Tal Baydar in the countryside of Syria's northeastern Hasakeh province, Dec. 21.
by Mustafa Kırıkçıoğlu Dec 28, 2018 12:00 am

A Turkish delegation will pay a visit to Russia tomorrow in order to discuss regional issues, particularly northern Syria after U.S. withdrawal

Turkey, the only actor cooperating over Syria with two major international players, Russia and the United States, will send a delegation of senior officials to Moscow on Saturday. The delegation is expected to discuss the future of the regions controlled by the U.S.-backed PKK Syrian affiliate People's Protection Units (YPG) following the withdrawal of the U.S. troops.

The committee will consist of top Turkish officials in foreign policy and security, including Foreign Minister Mevlüt Çavuşoğlu, Defense Minister Hulusi Akar, Presidential Spokesperson İbrahim Kalın and National Intelligence Organization (MİT) Chief Hakan Fidan. Diplomatic sources told Daily Sabah that Turkey has two main concerns in Syria to be conveyed to the Russian side, which are the Bashar Assad regime's threats to the Syrian opposition and the existence of the YPG in northern and eastern Syria. Both matters are seen as top priority border security issues by Ankara. Since the possibility of Bashar Assad regime offensive in areas in northern Syria held by the Syrian opposition runs the risk of triggering a new wave of migration, the YPG's continuous existence renders the complete security of Turkey's southern border unfeasible.

The containment of Iran's expansionist policies in Syria is another point that Turkish delegation is expected to discuss, said diplomatic sources, since the lack of the U.S.' presence may create an opportunity for the country to strengthen its power in the region.

To avoid such a migration wave to Turkey, which already hosts more than 3 million Syrian refuges, Ankara and Moscow reached an agreement in Sochi on Sept. 17 to establish a buffer zone cleared of heavy weapons and radical groups in Idlib. Prior to the agreement, the Bashar Assad regime was preparing a full-scale attack on the city, the last stronghold of the opposition. It was feared that the full-scale attack on Idlib, which is home to about 3.5 million Syrians, including the internally displaced, would cause a humanitarian catastrophe.

Russia has been advocating for returning to the pre-civil war status quo in Syria, in which the regime hold the reins with absolute authority; however, Ankara is ardently promoting a democratic transition period with a new constitution to recognize the rights of all Syrians to a broad extent. Regarding the issue, diplomatic sources emphasized that Moscow should not wield the YPG card to persuade Ankara to sit at the table with Bashar Assad in the existing condition.

Yesterday, Russian Foreign Ministry Spokeswoman Maria Zakharova said that northern Syrian territories under the control of the YPG should be given to the regime.

According to recent reports, over the past two days, the Bashar Assad regime has dispatched troops and military vehicles to the outskirts of YPG-held Manbij where Turkey plans an offensive, a war monitor reported yesterday.

For Ankara, filling the power vacuum by the Assad regime in areas currently held by the PKK's extension doesn't pose a significant problem as long as it handles YPG terrorism and reconciles with the opposition instead of flagrantly attacking them.

Çavuşoğlu said yesterday that Turkey seeks a solution in Syria that is "accepted by all Syrians," adding that Turkey is a major factor behind the U.S. withdrawal decision.

To that end, establishing the constitutional committee has been regarded one of the key missions of the Astana talks initiated by Turkey, Russia and Iran and considered to be significant for the process ahead in Syria as it is expected to pave the way to hold free elections and end the seven-year conflict.

On Wednesday, Washington announced it would be withdrawing all of its troops from Syria, following a conversation between Erdoğan and U.S. President Donald Trump over an imminent Turkish cross-border operation to eliminate the YPG. Following Trump's move, Erdoğan said Friday that Turkey had decided to postpone its cross-border operation into areas controlled by the YPG in eastern Syria for some time.

Erdoğan said Tuesday that he would have a face-to-face meeting with his Russian counterpart, Vladimir Putin, regarding the U.S. withdrawal from Syria, saying, "The U.S. did its part" by announcing their pullout.

In an effort to seek new alliances after the U.S. withdrawal, the YPG started to steer toward Russia for an apparent move to gain its tutelage to continue its existence in northern Syria.

Regarding the issue, YPG spokesman Amjad Othman told Sputnik that a delegation from the YPG-led Syrian Democratic Forces (SDF) went to Russia to meet with Russian officials amid fears of the possible Turkish offensive.

Also, Mazloum Kobani, the commander-in-chief of the SDF, said that they increased efforts to agree with Moscow and Damascus to fill the vacuum of the American withdrawal.

The Syrian civil war erupted in 2011 when the Assad regime harshly responded to protesters that poured onto streets to demand more rights and freedom. The protests initially emerged following the Arab spring demonstrations that resulted with strongmen in Egypt, Tunisia and Libya stepping down. The cruelty against protesters triggered a rebellion in significant parts of the country, turning into a brutal civil war before long. So far, an estimated half a million people have been killed in the war. Around 6 million people have been displaced internally and another 5 million were driven abroad as refugees.

Even though Bashar Assad, whose family has ruled for nearly five decades, managed to stay in power thanks to massive Iranian and Russian military support, large parts of Syria still remain outside of his grip, including regions in the north, under control of Turkish-backed forces, and in the east, ruled by the YPG.