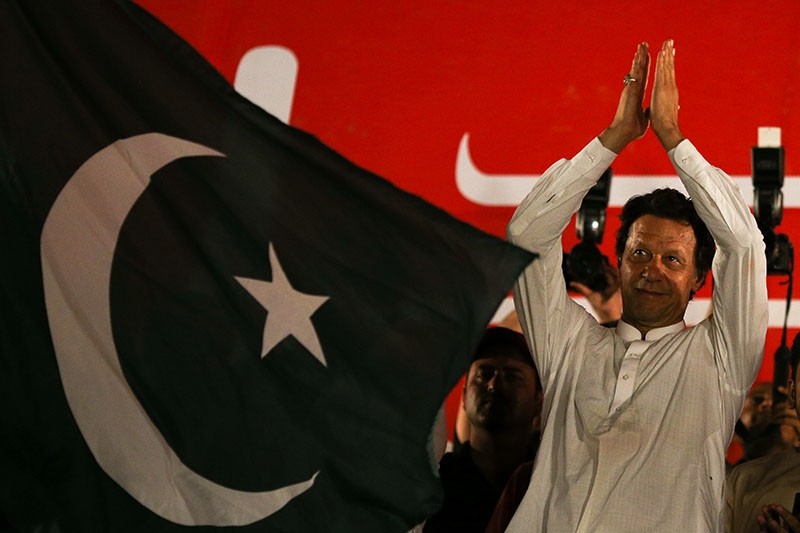 Imran Khan, chairman of the Pakistan Tehreek-e-Insaf (PTI) gestures to his supporters during a campaign meeting ahead of general elections in Islamabad, Pakistan, July 21, 2018. (Reuters Photo)
by Anadolu Agency Dec 30, 2018 12:00 am

Pakistani Prime Minister Imran Khan this week will pay a two-day official visit to Turkey, according to Pakistani officials.

During the visit, Khan will meet Erdogan and discuss the entire spectrum of bilateral relations between the two countries, as well as exchange views on regional and international developments, said the premier's spokesperson.

Khan will also address a business forum and hold several meetings with Turkish businessmen and potential investors in Ankara.

"Pakistan and Turkey enjoy historic and unparalleled ties based on a common religious and cultural legacy that dates back centuries. The two countries have excellent political, economic, defense, cultural and people-to-people relations that continue to grow from strength to strength each passing year," said the spokesperson.

Khan's visit will reinforce historic ties between the governments and peoples of "the two brotherly countries," and also help explore new areas of bilateral cooperation and collaboration, particularly in the area of economic, trade and commercial relations, he added.

Khan and Erdogan are also expected to discuss the ongoing Afghan peace process.

Khan also extended an invitation to Erdoğan and his Cabinet to visit Pakistan.