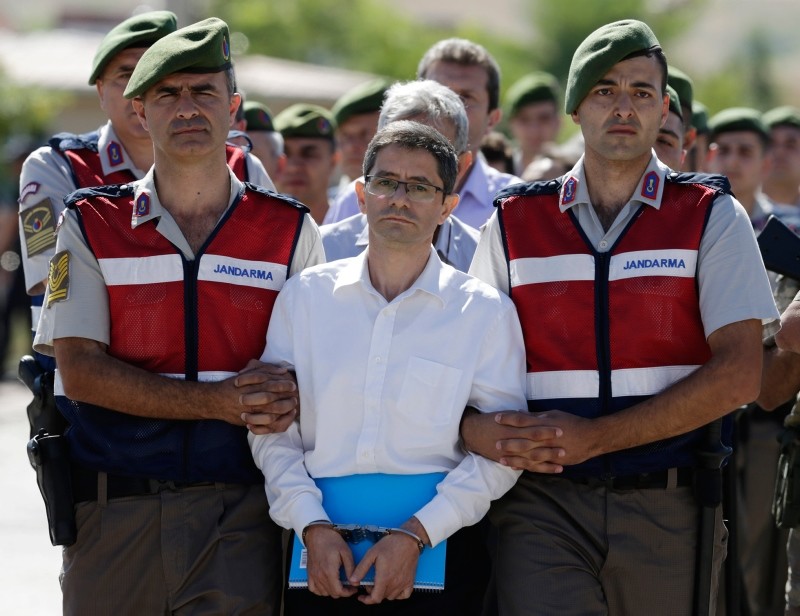 This file photo shows Kemal Batmaz, dubbed the ,chief imam, of FETu00d6 infiltators, being taken to the courthouse in Sincan district in capital Ankara for the one of the trials on the July 15, 2016 coup attempt. (AA Photo)
by Daily Sabah Jan 03, 2019 12:00 am

A delegation from the United States arrived in Turkey on Thursday to discuss the deportation of Fetullah Gülen, the leader of the Gülenist Terror Group (FETÖ), as the two NATO allies continue to work jointly in the judicial probe into the terrorist group.

The U.S. delegation, including FBI officials, went to the Ankara courthouse to follow cases of some FETÖ suspects, while it was reported that they would also refute the testimony of Kemal Batmaz via a video conference. He stands accused of being one of the masterminds of the July 16, 2016 coup attempt. Today, the delegation is expected to talk with Turkish officials as the two sides share info about the U.S.-based probe into FETÖ.

Batmaz, the chief "imam" for FETÖ's Air Force infiltrators, was one of several nonmilitary figures caught in Akıncı, an airbase that FETÖ used as a launch pad for airstrikes in Ankara during 2016's foiled coup. He was also a co-conspirator in the putsch bid along with Adil Öksüz, a fugitive FETÖ member, on behalf of Gülen, the U.S.-based leader of the terrorist group.

Öksüz and Batmaz were caught by CCTV cameras at the 143rd Fleet of Akıncı Air Base, the command center of the putschists, on the coup night. Öksüz managed to flee after a controversial court ruling ordered his release, while Batmaz was jailed.

Batmaz had flatly denied that he was in the security camera footage despite multiple expert witnesses and high-definition footage taken from security cameras clearly showing him walking freely in the aisles of the military base. At one point in the footage, Batmaz even nods when a coup plotter general gives him a military salute.

FETÖ is accused of staging the July 15 coup attempt to overthrow the democratically elected Turkish government in which 251 people were killed and more than 2,200 people were injured. The terrorist group is also accused of using its members in the police and the judiciary to launch two other coup attempts on Dec. 17 and Dec. 25 in 2013 under the guise of graft probes, in addition to sham trials launched against its adversaries using illegal or fake evidence and trumped-up charges.

The terrorist group operates 140 charter schools in 26 states in the U.S, which were opened in the late 1990s and in the beginning of the 2000s, some of which have changed names over time. Around 60,000 students attend the schools annually. These FETÖ schools are usually gathered under umbrella organizations and managed through foundations. As an example, 46 schools are named "Harmony" in Texas, 30 schools named "Concept" in and around Ohio; some others are called "Magnolia."

Having long been frustrated by FETÖ's comfortable activities across the U.S., Turkish officials recently increased pressure on Washington to expedite the Gülen probe and investigate the terrorist group's activities; some small moves have started.

Foreign Minister Mevlüt Çavuşoğlu said last month that the FBI has started investigating FETÖ's network in the U.S. in 15 states, especially charter schools, and has already made arrests in New Jersey. He added that Turkey has demanded the extradition of 84 people linked to FETÖ in talks with the U.S.

"We have brought up the issue of 84 people whom we have officially requested to be extradited in every meeting [with U.S. officials]. Our president brought it up in Argentina [at his meeting with Trump on the sidelines of the G20 Summit]. Trump specifically said: 'We are working for the extradition of the FETÖ terrorist leader.' There is this reality about FETÖ; there is an ongoing investigation by the FBI in nearly 15 U.S. states. The FBI told us that they have begun to see the dark side of FETÖ through their findings. Arrests have also been made in some places like New Jersey," Çavuşoğlu said.

Turkey also sought a preventive arrest to keep Gülen in the U.S. after reports emerged that the terrorist leader was planning to flee to another country. While Ankara says evidence shows that Gülen's network formed a quasi-state within the Turkish government and attempted to topple it with the ultimate intent of taking over the state through the coup, the U.S. is reluctant to extradite him, claiming that there is insufficient evidence to associate him with the July 15, 2016 coup attempt; this remains a deep rift in relations between the two countries.