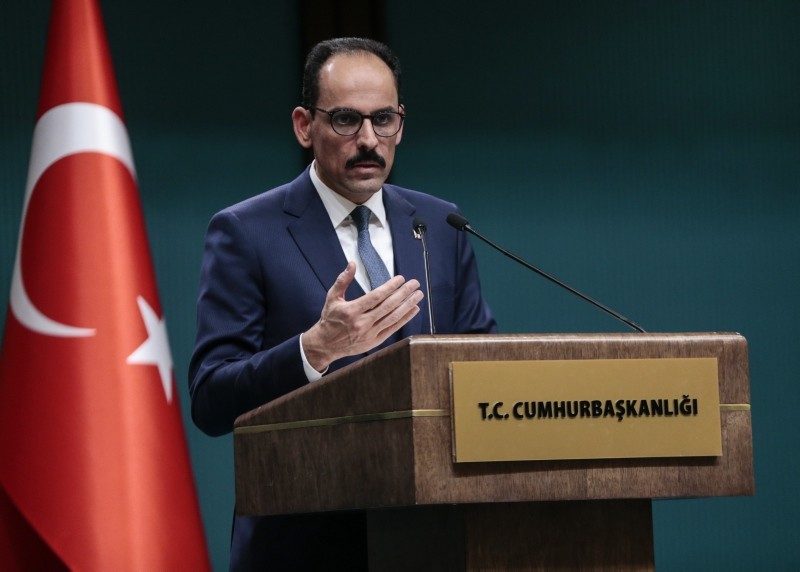 Reiterating that President Recep Tayyip Erdoğan had been voicing the same safe zone proposal for the past four years, Kalın said this time the same idea was floated at the top levels of the current U.S. administration.

Turkey has positively approached U.S. President Donald Trump's offer to establish a 20-mile buffer zone, Kalın said but added that the details of the zone needed to be worked out.

"It will be a safe zone not just for Turkey but also for migrants," Kalın said, asserting that Turkey will have control over the zone.

"Turkey will continue to be a player both in the field and at the table by utilizing politics, diplomacy and power," Kalın said.

A model similar to those established by Turkey in Jarablus, Al-Bab and Afrin can be used for Manbij too, he said.

Meanwhile, the political rift between the U.S. and Turkey after Trump's threatening tweets seemed to ease and heal following a phone call with Erdoğan.

"The economic threats are in the past now. A new goal has been set today and we will cooperate toward a positive outcome," he said.

Speaking about the U.S. military's pullout from Syria, Kalın said the U.S. commission last week presented Turkey a document that unofficially confirmed Washington's decision to withdraw from the region.

According to the spokesperson, Turkey offered a similar document in return which outlined the importance of not giving any territory to the PKK's Syrian offshoot the People's Protection Units (YPG) and Daesh terrorist organizations.

Kalın also announced Erdoğan would visit Moscow on Jan. 23 to meet with his Russian counterpart Vladimir Putin to discuss the steps both countries would take after the U.S. completes its withdrawal.

Answering a question about the proposed sale of Patriot missile systems by the U.S., Kalın said Turkey was still considering the purchase but reiterated that any potential purchase would not change Ankara's agreement with Russia on S-400 missile systems as the two deals are not tied to each other.

On Dec. 19, Trump said he was withdrawing all 2,000 American troops from the Syria in a sudden announcement.

Turkey on the other hand, has long signaled an operation into YPG-held areas east of the Euphrates River, as Ankara sees the presence of the U.S.-backed group as a threat to its national security.

Several members of the Trump administration called on the U.S. president to halt the withdrawal, demanding Washington to protect "Kurds" from Turkey.

But Turkey has repeatedly warned the U.S. to separate Kurdish people living in the region from terrorists and said it would only strike militants that threatened its security.